Joseph Schwartz was the architect for this ivory terra cotta fronted building. It was built for H. Thompson & Gus Bussis in 1919 for their ice cream parlor. The facade of the building is a combination of Art Deco and Neo-Classic styles. It is built of white terra cotta as opposed to Sioux quartzite, making it a stand-out on Main Street. The main structure was 25' x 93' in a one-story building with a full basement. It also had a 24' x 15' one-story wing to the rear, which was built to house an ice cream factory. The word "Colonial," the flower motifs carved in relief on the upper facade, and the dentils under the cornice are the most distinguishing features of the building.

The ice cream parlor operated here until 1938 and since then many businesses have been housed here. Sometime during the late 1940s or early 1950s, the glass block window across the front facade over the display window and doorway was filled in. From 1941-1951 Roe's Trading Post occupied the building. A fire on Christmas Day 1996 destroyed the rear wing. 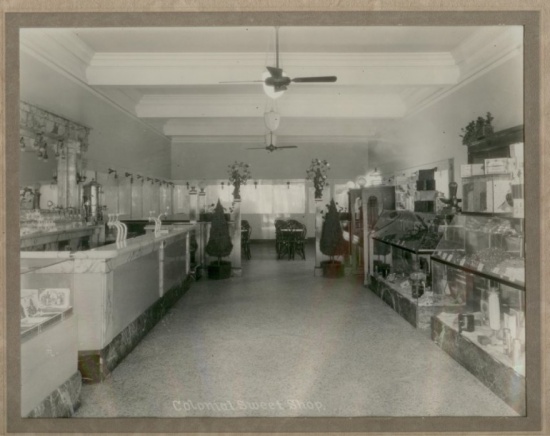