If you’re walking along the State House promenade any time between May and October, you’ll probably marvel at the beautifully maintained gardens and lawn. This is essentially Montpelier’s Central Park and it gets a lot of use throughout the year. Naturally, it’s a gathering spot for protests, but it’s just as often a place of celebration and leisure. There’s many an ultimate Frisbee match played on the lawns in the summer, and sometimes cricket, and in recent years we’ve added a skating rink in the winter.

As you’re walking up the promenade, you’ll see a plaque on the right-hand granite post that marks the high-water mark for the massive flood in November 1927 that decimated all of the downtown area. More than 8 inches of rain fell over a period of 48 hours, and at its peak, the water rose to a height of 12 feet at the intersection of State and Main Streets. When the water receded only one road of a dozen out of town was passable, and only 7 of the city’s 24 bridges were undamaged. Almost every building in the downtown area was either destroyed or heavily damaged. Sitting at the confluence of two rivers – the Winooski and the North Branch, the city itself is a flood plain, so it’s seen plenty of high water over the years since, but all of them are measured against the Flood of ‘27, and the devastation of that one has thankfully never been equaled.

You might want to walk a bit further up the promenade for a closer view at the statue described in the next stop. 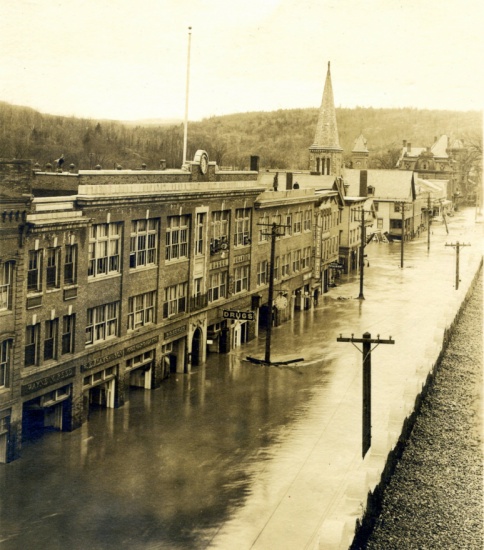