Before it moved two doors down, National Life also lived here for a while as a tenant of the Vermont Mutual Fire Insurance Company, which owned the building. But it is more interesting as the one-time home for the Montpelier branch of a substance abuse treatment franchise called the Keeley Institute. It rented space in the building from 1892-95. This was a time when opium was sold over the counter, making opiate addiction and alcoholism as endemic in the late 19th century as it is today. Founded in Illinois, the Keeley Institute was one of the first to address the scourge as a disease rather than a moral issue and was known to create a supportive and caring environment for its patients.

Its treatment regimen may have been questionable, though. It required the administration of injections its founder called “bichloride of gold”, but he refused to ever disclose what the actual ingredients were. Patients were also supplied with as much whiskey as they cared to drink until voluntarily giving it up. Business took off like a rocket as Montpelier’s citizens embraced the treatment with enthusiasm. There was very little privacy involved, either. Newspapers around the state sprinkled in announcements of treatments much as they did the births and vacation plans of their citizens, and many treatment graduates went public to testify to their success in conquering their addiction.

Eventually, the Institute came under attack from competing recovery centers, and the Montpelier franchise in particular was beset with rumors of embezzlement. It closed in 1895, but by then over 500 patients were said to have taken the “Keeley Cure” during its short lifespan in the building. For a while, it was a trendy destination for the wealthy. While taking their treatments, they could enjoy the amenities of the capital city while comfortably installed in the state’s finest grand hotel right across the street. 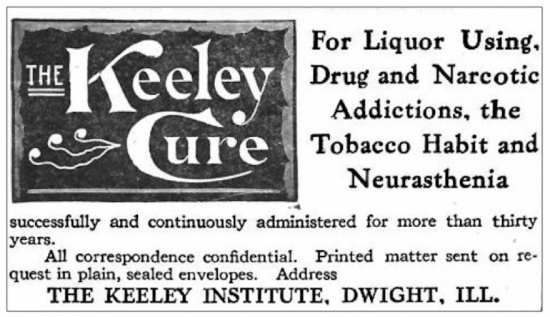