In 1875, brothers George and Joseph Larkin of Winnipeg built a brewery near the site of today’s tennis courts in Moorhead’s Riverfront Park. After an unsuccessful business effort, the Larkin brother’s ale-making business was foreclosed and subsequently bought by a popular Moorhead Swedish immigrant John Erickson, who also happened to be a local politician, hotel and business magnate. Erickson the brew in his local saloons, and also shipped kegs and bottles of the suds up and down the Northern Pacific Railway line. According to the publication Land of Amber Waters: The History of Brewing in Minnesota, Erickson was “mayor of Moorhead from 1886 through 1889” and under his direction, the Moorhead brewery “grew from 279 barrels in 1878 to 1,835 in 1882. Erickson and his brew master, Fred Wachsmuth, took advantage of a small number of breweries to their west. Erickson’s newspaper ads in 1882 announced that they would ship to any point on the Northern Pacific line.”

While the brewery initially did well, Erickson soon experienced “frequent” brew master “turnover” (Wachsmuth committed suicide after being fired by Erickson) accompanied by deep financial troubles, and eventually Erickson was evicted and the property was again foreclosed by the First National Bank of Moorhead in 1895. The brewery lay vacant for several years, until Ole Aslesen bought the brewery in August of 1897 and continued the operation until it burned to the ground in 1901, and Aslesen’s insurance losses prevented the brewery from being rebuilt.

This point of interest is part of the tour: Moorhead Historic Preservation Walking Tour 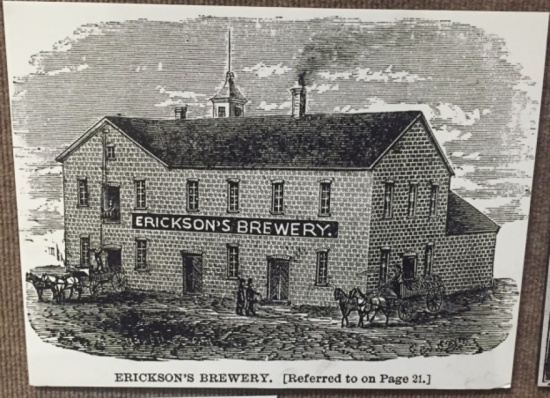