In December 1916, a number of First Nation soldiers visited Edinburgh with the 114th Battalion. After arriving at Princes Street Station from Glasgow, they marched “along Princes Street at a swinging pace” before turning “off at the Mound and proceed[ing] up the slope on the way to the castle."

While the soldiers enjoyed their visit to the city, they also made sure to educate the British public about contemporary First Nations. The newspaper articles covering the tour were full of stereotypes, which Chief Clear Sky, one of the leaders, was keen to dispel. Talking to the Dundee People’s Journal, he remarked, “‘You’re not going to ask me whether I’m a trapper or a hunter, are you? ‘Kase I ain’t either. What gets me is folks fancying we Indians must all be trappers and hunters. These days are all pretty well shot up now. I’ve done a whole bunch of things to earn a living. Last thing I did was getting around in vaudeville.’” Shortly after the visit, the 114th was sent to the Front, although some soldiers continued their connections with Scotland. Lieutenant John Stacey, for example, wrote a letter to the Lord Provost of Glasgow in July 1917 to update him on the 114th’s efforts in France and Chief Clear Sky returned to Scotland several times in the following years.

Learn more about the story of James Moses (Delaware Nation), one of officers of the 114th who eventually joined the RAF, from his great nephew here: https://57-630sqnassoc.org/draft/ 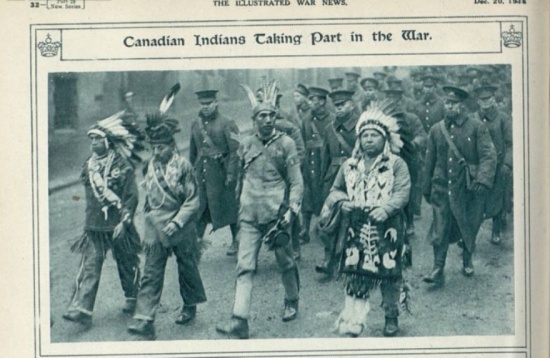 The Mound
Photo By: Soldiers from the 114th Battalion marching through Glasgow in December 1916, “all in khaki except for the chiefs who – for the occasion – headed the party in regalia.” (Illustrated War News, 20 Dec. 1916, courtesy of the British Newspaper Archive.)