The first mill was constructed in 1818 at the head of Upper Rideau Lake. Instead of the Mill Pond, a stream originally flowed from Sand Lake. At one time Westport’s “Pest House” sat at an isolated location on the far shore of the pond. It was used during the smallpox epidemic, which ended in 1902, as a quarantine house. It closed in June of 1902 and only the foundation remains.

A.M. Craig (his residence is referred to at Stop 19 - 18 Church St) invented the one-piece harness buckle and began manufacturing his wares at a factory on the west end of the pond. When that building was destroyed by fire in 1909, the factory relocated to 19 Main Street where it became known as the Westport Manufacturing and Plating Company. By 1916 the major investors forced a foreclosure resulting in the abandonment of the building. In the 1920s, it was renovated into a saw mill and later used as a dance hall before being purchased for a fish hatchery with staff living accommodations. In 1988 it was converted to the current condominiums. 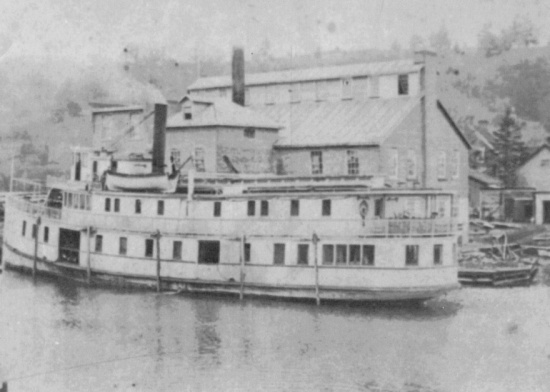 The Origins of Westport
Photo By: Cruise ships used to dock at Fredenburgh's Wharf which was located below The Westport Manufacturing and Plating Company.