Located at 153 North Hartman Street, the Richard Chapman home or "The House the Depression Built" was built in 1929. It gained the nickname "The House the Depression Built" because of using recycled materials to help cut costs and it gave men work. It is a Tudor Revival style home and was built for an estimated $23,000. Today that would be over $400,000.

Features of the home include the "clinker" bricks, leftovers from an Ohio factory, surround the windows. These could not be purchased for any amount of money today. The shelving, interior trim, flooring and cabinetry were all from the Mutschler factory. The marble foyer was obtained from the Elkhart St. Joseph bank. Floor lamp pedestals were used as stair rails from the Lamb Brothers and Green Factory. The exterior light fixture was saved from a former bridge. The slate in the master bath came from the grist mill and stone for the fireplace came from Bedford, IN. The leaded glass windows from the Lamb Brothers and Greene factory give the home a cathedral appearance.

The Original Mutschler kitchen was featured in House Beautiful in 1948 and was the first custom built kitchen by the Mutschler Brothers Company.

Richard was married to Helen Mutschler in 1926 (she was the daughter of Charles and Della Mutschler). He worked for the Mutschler Brothers Company and was in charge of the advertising and sales promotion. He worked his way up through the company and eventually at one time served as the President of the company. 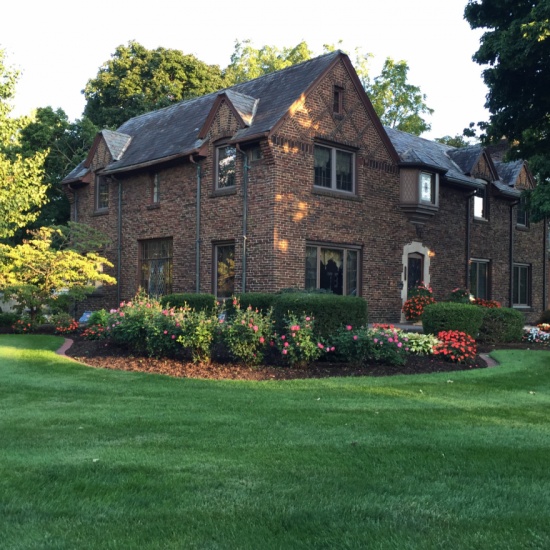