It might seem strange to have a statue of a seagull here, but this small monument commemorates an important event in early Utah history; what some members of the church refer to as the Miracle of the Gulls.

In May of 1848 the Mormon pioneers planted crops for their first spring in Utah. As the crops ripened, swarms of thousands of crickets descended upon the farms. The insects consumed entire fields. This was devastating! The Saints prayed for help. A seeming answer to their prayers, legions of seagulls showed up in June and devoured all of the crickets. Enough of the crop was spared and the pioneers prospered. This event is remembered by Latter-day Saints as a miracle.

To celebrate the role seagulls played in the pioneer's first year in Utah, the LDS Church erected Seagull Monument here. The Seagull Monument is believed to be the first monument dedicated to birds.

The California gull is now the Utah State bird.

This point of interest is part of the tour: Temple Square Walking Tour 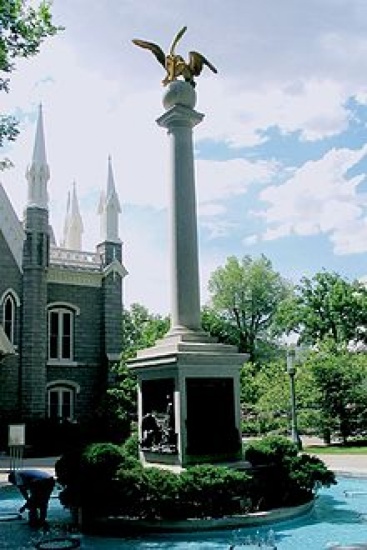