Local architect Henry Hinckley designed this impressive building as an automobile showroom and shop that opened in 1915. A decade later owners hired noted theater architect Victor Rigaumont to convert the building into a theatre with an interior meant to be a “feast for the senses.” Moorish and Renaissance Revival details adorned the richly ornamented interior, along with Collegiate Gothic symbolism to recognize Ithaca’s college-town character. Opened in 1928, the State operated as a vaudeville theatre and began showing movies in the 1930s.

The aging building faced the threat of demolition in the late 1990s. With widespread community support, Historic Ithaca, Tompkins County’s only preservation organization, stepped in to save the building in 1998. With this first phase of repairs complete, the State Theater reopened in 2001 with a community celebration. Historic Ithaca managed ongoing rehab work over the next few years, including exterior restoration of the façade and marquee and interior restoration of significant design elements.

The preservation organization sold the theater in 2009 to the newly formed State Theatre of Ithaca, Inc., whose primary mission is the continued preservation and operation of the community cultural institution. Today the State Theatre is one of the most significant performing arts venues in the Finger Lakes Region, hosting community performances as well as national and international acts and anchoring downtown Ithaca’s cultural and economic revitalization.

The State Theatre is an individually designated local landmark and listed on the State and National Register of Historic Places. It is Ithaca's only remaining movie palace to still screen movies. 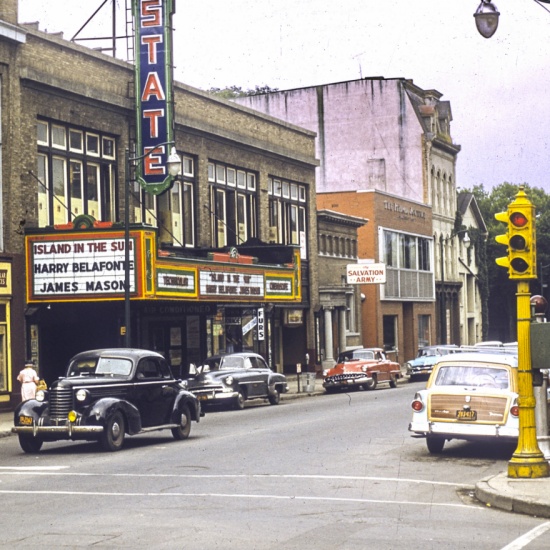 The State Theatre
Photo By: Photo courtesy The History Center in Tompkins County