A Look Around Downtown Fargo

The south wing of the historic Watkins building is located at 802 Main Avenue, Fargo. It was designed in 1884 by architect Charles Daniel. The building's first owner, Andrew McHench had the building constructed to house Masonic Lodge Shiloh No. 8 with commercial space on the lower floor. The masons occupied the third floor of the building from 1885 to 1889.

Fargo College occupied the building from 1887 to 1890, until their first building was completed on their campus near Island Park. From 1890 to 1893 the Northwest College of Commerce, established by Mathias F. Knox, called the building home.

F. Leland Watkins, Sr. arrived in Fargo in 1893, working as a typesetter at the Argus newspaper. Mr. Watkins and Mr. Knox became acquainted and formed the Dakota Business School. The school opened in the fall of 1894. The new term started out with five students The DBS offered courses in business management, penmanship, mathematics, accounting, bookkeeping, stenography, and Gregg Shorthand. Gregg Shorthand is a system of writing that uses symbols or abbreviations for words and common phrases. This allows a person to write as fast as someone speaks like when recording testimony in a courtroom.

After collecting $500 in tuition from the students, Mr. Watkins arrived at the school to find Mr. Knox and the money gone. The first few years of the schools' operation were difficult for the lone Mr. Watkins. But her carried on. In 1903, Mr. Watkins bought the entire building.

Throughout the years of operation building was owned by three generations of Watkins'. F. Leland Watkins, Jr., and F. Leland Watkins III. The school closed in 1978 due to government regulation of teaching techniques and curriculum and the rise of state technical and vocational schools. An estimated 30,000 students graduated from the school.

Today the south wing, along 8th Street, houses The Studio and the north wing, along Main Avenue, is home to Reed & Taylor Antiques.

The south wing is an excellent example of High Victorian Gothic commercial architecture. It has an elaborate cornice and parapet topped with finials. The north wing, being constructed later, has a Classical Revival facade with arched keystone windows, the second floor features a wide Chicago style three-part window framed by Ionic capital pilasters and white marble string courses. Both wings were listed in the National Register of Historic Places in 1979.

This point of interest is part of the tour: A Look Around Downtown Fargo 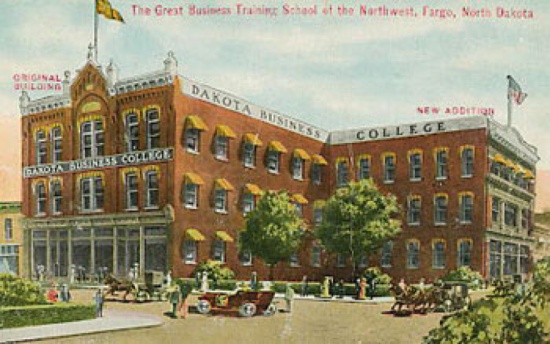