One of the oldest structures on South Elm Street is this three-story brick building built by confectioner Thomas Bailey in the summer of 1888. Bailey's earlier store was wood frame, and it was lost in a major fire on June 17, 1888. The fire was so intense that ii led to a new ordinance stating "if any person shall erect a building other than brick, stone, or metal with stone roof on Elm Street, he shall be convicted by the Mayor and fined the sum of $50." From that point on, no wood structures were constructed along Elm Street, and the city's early fire code was established.

The current building was erected in the weeks after the fire by contractor and brick mason David Kirkpatrick. Completed by October that same year, the double store was described as a "handsome, durable edifice, three stories high with dimensions of 70x37 feet." In the 1890s, the upper floors of the building were operated as the Piedmont Hotel, a quasi-permanent residence for African-American men and women. By the twentieth century, the building was owned by the Blumenthal family, under who's name the structure is associated today.

Style: Greensboro Vernacular. Listed to the National Register of Historic Places April 1980 as a contributing structure within the Downtown Greensboro Historic District. 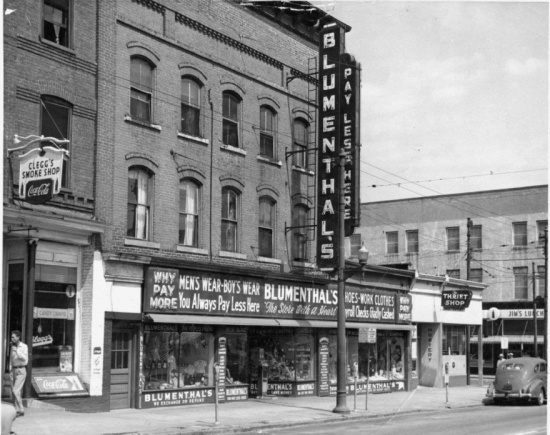