Til Death Do Us Part

Til Death Do Us Part

You’re likely very familiar with Federico Archuleta’s art, even if you don’t recognize his name. The graffiti artist and illustrator works with stencils to create his Mexican-inspired, bright, pop-y works that cover much of Austin.

His tools of choice allow him to recreate a prolific number of colorful murals, including the piece featuring two loving skulls, giving them the ubiquity they’re known for. Til Death Do Us Part is iconic here in Austin, but it’s not Federico’s only recognizable piece. You probably also know and love his Selena portrait, the full-body Virgen de Guadalupe, and the Johnny Cash, Willie Nelson, and Bob Dylan figures that grace Manor, South Congress, and Guadalupe respectively. Federico’s colorful aesthetic is heavily influenced by the fusion of Latino and American cultures he grew up with on the border in El Paso, Texas. 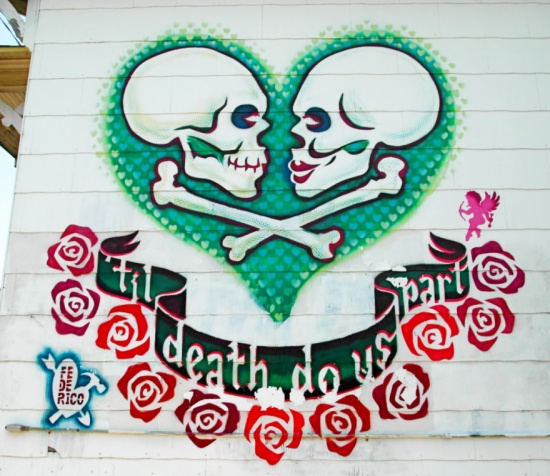 Til Death Do Us Part
Photo By: