The Randolph Warehouse and Farmville Warehouse

The Randolph Warehouse (Old Warehouse), located on the Appomattox River at Mill and First Street, is now occupied by Charley’s Waterfront Café and part of Green Front Furniture Company.

In January 1798, Judith Randolph gave permission for warehouses to be built on her land near Rutledge’s Bridge. The bateau wharf located just behind the Randolph Warehouse offered exceptional navigation on the Appomattox River, operating 40 bateaux, carrying a captain with two crewmen and five to seven tons of cargo, much of which were hogsheads of tobacco.

By 1818, the Farmville tobacco industry became too big for the Randolph factory alone, leading to the construction of the Farmville Warehouse (Middle Warehouse). By 1836, Farmville housed two warehouses and ten factories.

In 1862, the General Hospital of the Confederacy was established in Farmville, serving mostly cases of chronic illnesss to make room in Richmond hospitals. Of the three divisions of the hospital, two were converted tobacco warehouses. With the end of Civil War and the beginnings of Reconstruction, Farmville become the third largest market in the state for tobaccos sales, leading to the construction of a third warehouse in 1875 known as the Planters Warehouse (now Farmville Wholesale Electric). In 1900, W. G. Dunnington became the largest tobacco dealer in Farmville.

In January of 1898, a fire raged in downtown Farmville, destroying thirty-six buildings, including all of the original early 19th century riverfront warehouses, and causing $150,000 in damages (roughly $4 million today). The fire reportedly originated in the storage room of Duval Robertson & Co. at the corner of North and Third Street, as the Washington Post informed, “two terrific explosions of blasting powder sent the burning brands on many unprotected buildings and shook nearly every house in the town.” Shortly after, the double factory used by W. G. Dunnington across the street was seen ablaze and quickly overwhelmed firefighters, leading to an emergency telegraph to Lynchburg for assistance. As the Washington Post reported, “there was plenty of water, but not the means with which to use it.” The Farmville Warehouse and the Presbyterian Church were severely damaged, while surrounding buildings to the north were were seen crumbling to the ground.

In March 1924, another fire of unexplained origin damaged two tobacco warehouses and the Presbyterian church, causing an estimated $300,000 in losses (nearly $4.3 million today). After a two-hour fight, the flames were put out, unlike the uncontainable fire nearly 25 years earlier, resulting in considerable losses in tobacco industry.

Julian and Edwina Covington, "Tobacco Industry in Prince Edward County," in Today and Yesterday: The Heart of Virginia, 2006.

This point of interest is part of the tour: High Bridge Walking Tour 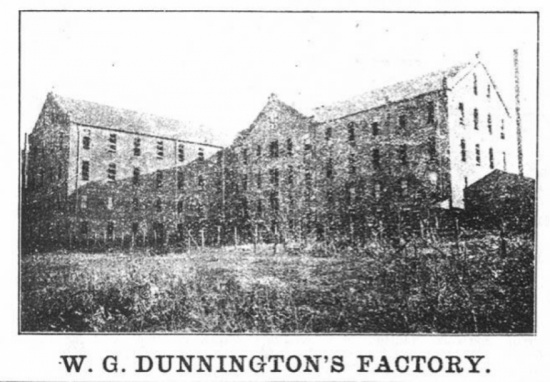 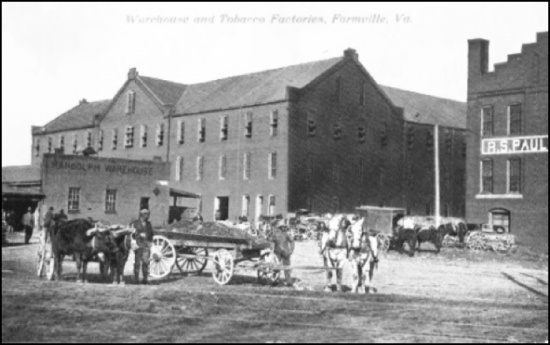