This stop will begin by telling you how Town Center was created, and will then take you on a tour of the building itself.

The beginnings of Town Center

Our Town Center relocated here at the north end of Pelican Lake in 1991. It used to be in what’s now Town Hall Park and had been housed in a converted gas station. This impressive transformation was financed with a combination of public and private funding.

What was on originally on this site? Before 1950, when Juno Beach was in its infancy, this was nothing but scrub land. This plot was one of the first to be sold by its developer and the attractive Seminole Restaurant opened here soon after. It catered to tourists who flocked to the Juno Beach Fishing Pier, which was just a block away at the end of Mercury Road. After the restaurant was sold, the site became the home of the newly founded United Methodist Church in 1959, which later moved to its present location further north on Ocean Drive.

Why is this called Town Center and not Town Hall? For good reason! The townspeople wanted this to be more than just government offices, a Town Council Chamber, and the base for our Police Department. They were so eager to have a community center, they even helped fund it through a special bond issue. Today, it lives up to those hopes. Apart from serving its governmental functions, the Town Center houses a lending library, public meeting rooms and hosts a wide variety of social and civic events throughout the year. These include: a Valentine Party for couples married 50 years, a June picnic celebrating the town’s founding, Oktoberfest, presentations by the Historical Society, and year-end holiday festivities. Every morning, locals regularly get together to chat and sit out on the porch overlooking the lake.

This is a busy place and, as some would say, Town Center is “the heart of Juno Beach.”

Let’s begin our tour here in the courtyard. Look atop the flagpole and you’ll see the sea turtle flag—with the town’s logo. (Doesn’t that sea turtle look like it’s grinning?) On the paving stones in the courtyard, you’ll see bricks recognizing the names of various citizens: present and past members of the Town Council, notable members of the town staff, Citizens-of-the-Year, and donors.

Near the archway, there’s a splendid large bronze sculpture of a sea turtle swimming underwater.

Now let’s tour the building itself.

Step inside the lobby. On the wall to your right, you’ll see a tall painting titled “The Spirit of Juno.” It portrays the Celestial Railroad of the 1890s, sea turtles, a pelican, our beaches, and our protected natural areas. This work by a local artist was commissioned after he won a town-sponsored competition. The other walls in the lobby have lots of interesting historical photos of the town, including one of the original Seminole Restaurant. There are various sculptures, too, including a cute one showing turtle hatchlings emerging from their eggs.

Be sure to explore the Council Chamber on the ground floor. Along with various curiosities on the walls, there is typically a rotating exhibit of work by local artists. This is sponsored by the town’s Friends of the Arts committee.

Now return to the lobby and walk upstairs. (Or take the elevator just as you exit the Council Chamber.) You’ll discover more historical photos lining the walls. If there’s no meeting taking place in the Celestial Conference Room, you’ll find interesting photos about the historic former town of Juno.

Continue down the walkway to the library, and admire the magnificent view from its terrace overlooking Pelican Lake.

We’ll end our tour with the Police Department. Although you can’t visit it, you may be curious to learn a few facts.

Today, Juno Beach has a population of about 3300; back in 1953 when the town incorporated, it had a mere 130! Nevertheless, the town’s founders were determined to have their own police department, separate from the Palm Beach County Sheriff’s Office.

Our Police Department currently has 16 sworn officers. They work in close collaboration with the neighboring departments of Jupiter and Palm Beach Gardens and have a unified communications network. In addition to having standard patrol cars, the department also has a volunteer citizen team, and specialized beach patrol vehicles.

The department is proud that it takes a proactive approach to policing, and works in close partnership with the community. It even has the support of active volunteers. Juno Beach residents often remark what a close relationship they have with their department, and this is typified by monthly Coffee-with-a-Cop chats. 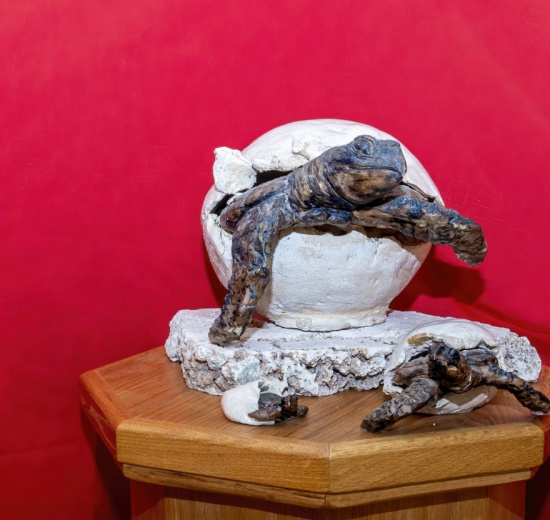 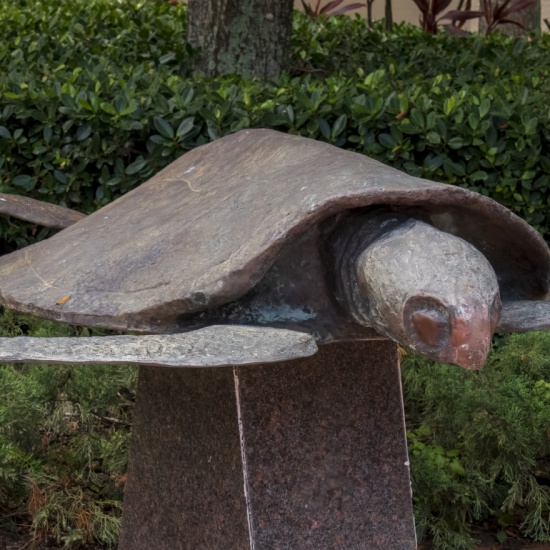 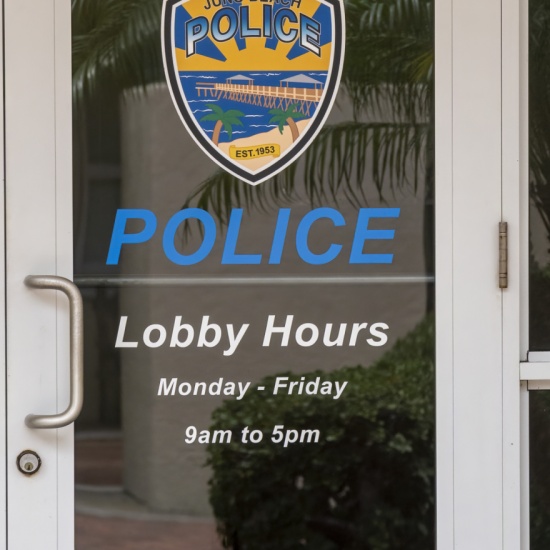 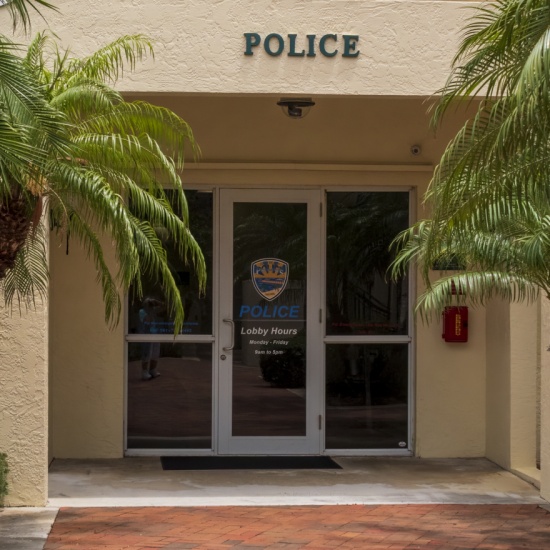 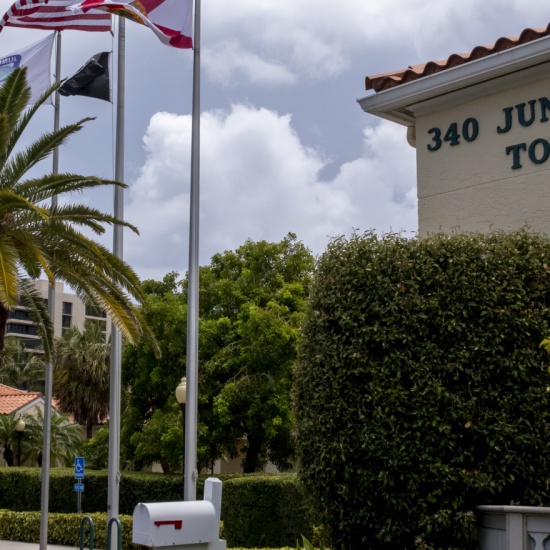 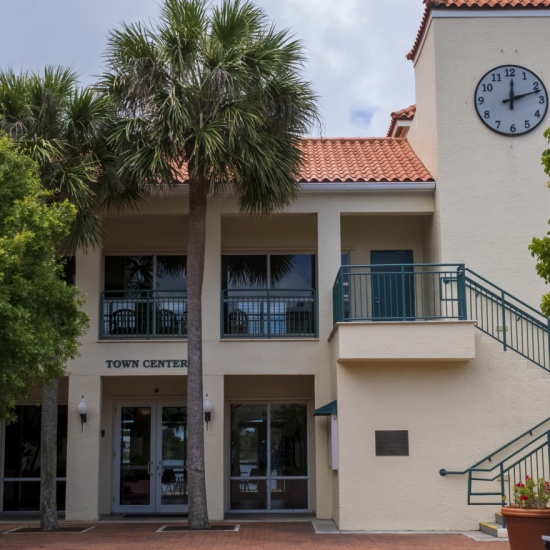 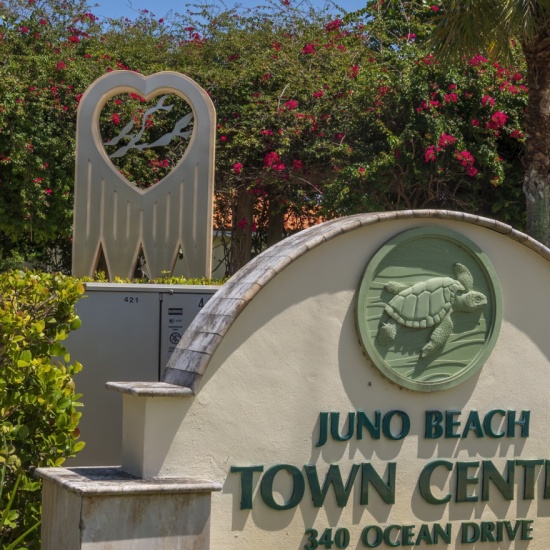