The Town Hall, just across the street from the Royal Hotel, was built in the 1840s as a residence for John Woodall, a member of a prominent family of Scarborough bankers. The building was designed by Henry Wyatt who displayed the design at the Royal Academy in 1852. Wyatt also designed the ‘Gothic Pavilion’ at the Spa and Woodall, Hebden & Co’s bank at the corner of St Nicholas Street and Newborough – now Barclays. The style of the house is Jacobean in red brick with stone trim and this style was emulated when the building was acquired by Scarborough Corporation and substantially enlarged and remodelled to form the Town Hall. The original
owner's initials may be seen in the gable end high above the main entrance which also contains the ornate date 1844. John Woodall died on 9th February 1879 and was succeeded by his son John W. Woodall, who offered the house and associated gardens to the Corporation in 1898. The decision as to where to site a new Town Hall was resolved at a meeting on 5th April 1898, when the Corporation decided to buy St. Nicholas House. Harry W. Smith, the recently appointed borough engineer and surveyor, designed the new eastern (seaward) wing in a similar style to the original, to accommodate the council chamber and other offices. The Jacobean theme was continued in the design of the Council chamber and other features. This work was completed in 1903 and the new Town Hall was officially opened by Princess Henry of Battenburg in the same year. The purchase also included the St Nicholas Cliff
undercliff and the Borough Engineer also redesigned these gardens which were opened to the public on 14th August 1900. Further redesign and substantial remodelling was done in 2001 and the gardens were reopened on the 12th December of that year. Harry Smith went on to lay out or redesign most of Scarborough’s parks and pleasure grounds during the next 30 years, including Peasholm Park and the Italian Gardens on the South Cliff. Further alterations to the Town Hall were made in 1962-64, with extensions in King Street and St. Nicholas Street. The statue of Queen Victoria in the Town Hall gardens is the only statue of a public figure to be found in Scarborough. 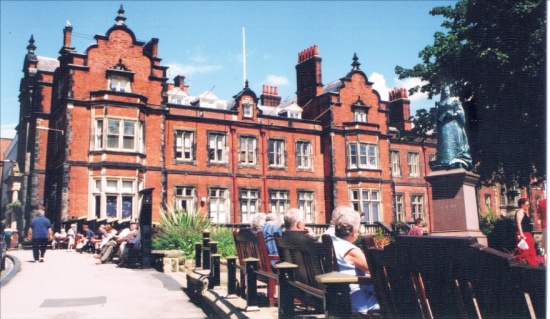