Trailhead Eight: Family and the Flowers

Trailhead Eight: Family and the Flowers

My sister has only ever joined me on this hike once before and as such created a very memorable journey for the both of us. Reaching the 7-mile marker on this trail, one quickly finds themselves surrounded by plants in abundance, at least in the spring when we went. For my sister, she noted that this made the hike far more enjoyable as she got to observe all the local species of plants that were in bloom along the trail. Contrary to early markers that primarily featured mosses and grasses, the abundance of flowers when we hiked was immense. In particular, my sister, an amateur botanist, pointed out right off the trail a sect of purple blooms that had captured her attention. Knowing little about flowers outside the occasional bouquet or landscaping was curious to see the flowering of this small plant. My sister suggested it looked like an orchid and implored me to take photos of it so that we could ask a family friend who was a former park ranger. Upon finishing our hike we learned that this particular species of Orchid was known as a "snowy orchid" that is commonly found blooming alongside the rich wet soil of the trails in early spring. My sister and I felt so lucky to be able to experience the blooming of this native plant. As such, I implored myself to see if there was a deeper history of the plant as it related to the Manahoac tribe that once inhabited this land. Unfortunately, as much of my research of this area proved, if there was any Manahoac literature regarding the name of this plant, it was lost to time and colonization. This interaction ultimately provided me with an emphasis on the importance of Indigenous knowledge when interacting with the land. As these tribes gained insight over thousands of years, they surely knew the species to inhabit this soil, the best. In missing this information I cannot help but feel that a piece of this history is surely lost. 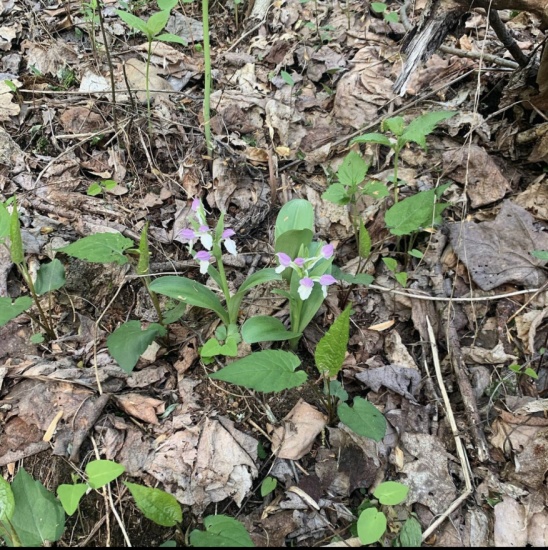 Trailhead Eight: Family and the Flowers
Photo By: Picture of the orchid