Above all else, my genealogy of this land has taught me much regarding the history of place and space and the way in which the process of western colonization has erased indigenous stories of being in a given space. Old Rag stands as a territory inhabited by two proud tribes of indigenous peoples, the Shawnee and Manahoac. However, this project has taught me that much of the indigenous history of this land has been removed from the common consciousness and has been replaced by the knowledge of the colonizers. From the proper names of local species to the native philosophical and spiritual linkages that told of the earthy formations surrounding us, it seemed as though history had been lost.

Being such, I find it important to detail, the contributions of said tribes to the local area, particularly the stewardship they practiced in maintaining the land that we walk on. Beginning first with the former tribe known as the Manahoac, records indicate that the indigenous community numbered only 1,500 in total population and was a semi-nomadic community of hunters and gathers. The tribe is recorded as having spoken a Siouan-type language and had many close ties to those neighboring tribes along the Shenandoah Valley. As such this tribe faced dispossession of land when European explorers began traversing the Virginian landscape, rather than direct contact with Western colonization. As such these tribal members were forced to assimilate into neighboring tribes. The Manahoac were most known for their open relations with other tribes such as the Monacan which is perhaps what lead to their assimilation into other tribes in the area (Bushnell 1935)

Continuing on to the Shawnee tribe which inhabited much of the land northeastern land comprising what is now known as Shenandoah National Park. Again not much is known about the Shawnee tribe as unfortunately there has been an immense erasure of the tribe's history within the area. Even more than the Manahoac, the Shawnee lack many records when it comes to those prescribed by tribes local to the area who might have interacted with the Shawnee. As such, this lack of information truly highlights a need to prioritize the investigation of the oral histories that descended from these tribes as a means to better understand the persons who had lived experiences on the land. Finishing the tail-end of this hike, I spotted a snake among the brush and began to wonder if those before me interacted with creatures like this one and if so if they had histories to share. 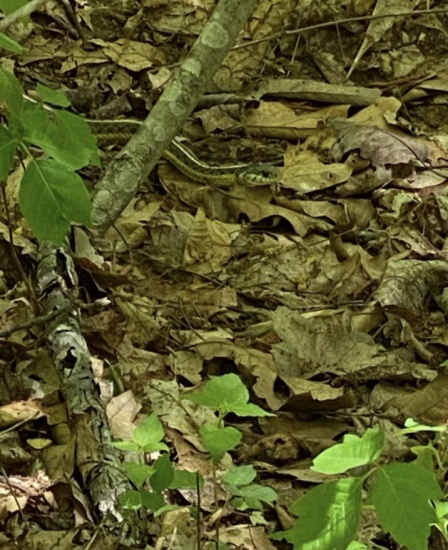