When I first hiked Old Rag with my father I wanted to prove myself. My father, a seasoned outdoorsman and nature enthusiast had always professed a fondness for the outdoors. From white-water rafting in Colorado to hiking the Appalachian trail twice, there was no doubt that his love for nature was unmatched. As such, I too wanted to rise to the occasion of living in my sixteenth year and learn to love the outdoors before I soon became too old or "too busy" to enjoy it. So when my father suggested the Old Rag hike, a whopping twelve-mile loop I signed on willingly because I wanted to prove to myself that my body was capable and that I was strong enough to handle the journey. With my overstuffed backpack and worn hiking boots, we loaded into the car in the early hours of the morning, hoping that dutiful timing would pay off in terms of pacing.

I chose this particular mark for my guided hike as the 1-mile marker was a point of early success for my first time up the mountain. Moving beyond the marker I fondly recall an immense weathered boulder along the ridge of the trail. According to local geologists, the boulder served as a physical memory of debris that once fell following a landslide down the mountain face thousands of years ago. Touching the weathered face of the boulder one can feel the grooves and moss that grace its face. A humbling part of the geography, this boulder is a frequent reminder on my hike that not all facets of the land fit perfect geometric formatting. The European colonization of Virginia territory has led to a modern viewpoint that land is to be molded under the dominion of man to fit a clean linear segmentation. Yet, elements like this boulder remind me that nature does not bend to the will of man, willingly, and over time reclaims its space. 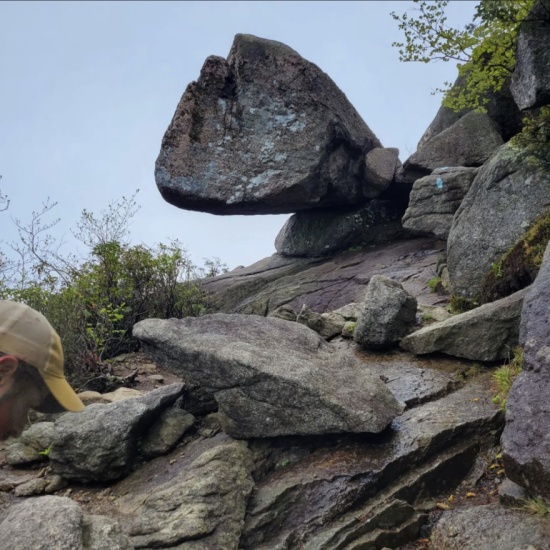