Late one night in January Fredd Biggs spotted flames through the windows of the Academy, as it was called. He immediately went to start the engine in the firehouse, and along the way ran into Colonel Durling, who set off to ring the bells and raise the alarm. As the night unfolded it revealed the fire company’s shortcomings and weaknesses.

It was incredible luck that Mr. Biggs was the first one to see the fire, since he was a member of the fire company and could go fetch the engine. Unfortunately, that was about all he could do. Before the introduction of the familiar large red trucks of today, fire engines were essentially a pumping mechanism on wheels that needed to be pulled to a fire by horse or by man. Once there, the engine needed a water source to pump from, like a creek, well, or pond.

Colonel Durling did a poor job raising the alarm. It is unclear whether his shouting was too quiet, or he tried to raise the alarm with a broken or quiet bell. No one responded quickly enough to help Biggs drag the engine to the fire. By the time the bell at the Baptist church rang loud enough to wake up the town, fire had filled the basement of the Academy and was rising through the ceiling into the first floor. Eventually, the men of the town managed to drag the engine up to the fire, and found a water source in a nearby well. However, in another stroke of bad luck, the pump mechanism was frozen. The town, having been startled awake, raced to the academy, and found that all they could do was stand by and watch the building go up in flames.

The building, founded in 1854, was destroyed completely, and so were the textbooks, furnishings, and teaching materials inside. The origin of the fire remains a mystery, although of course speculation of trespassers in the school circulated in the press in the following weeks. 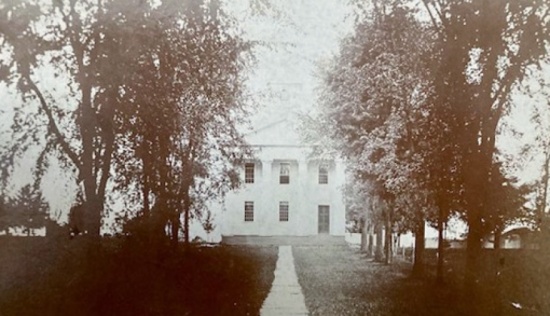