The United States Post Office and Courthouse was built between 1931-1933. Its design is attributed to staff architects under acting architect James A. Wetmore. Using materials such as Mount Airy Granite, Indiana Limestone, and aluminum – this building employed the modernist style for the first time in Greensboro. The building was funded through the Public Buildings Act of 1926 and cost approximately $585,000 to build.

To the east and west of the entry pavilion are carved, open stone grilles. The grilles consist of a geometric pattern with the letters USA at the top and GNC (Greensboro, North Carolina) at the bottom. Two stone carved plinths rest on stone cheek walls that frame the entrance stairs and project from the building wall immediately below the open stone grilles. The plinths, featuring the lotus motif flanked by the scroll motif on each side, rise eight feet and provide ornamental lighting for the elevation, as each supports five glass and metal lanterns. Between the façade’s pilasters are aluminum spandrels separating second and third floor windows. The spandrels feature the seals of the Treasury Department, the Post Office Department, the Department of Justice, the War Department, the Department of Agriculture, and the Department of Labor. In 1988, the building was renamed the L. Richardson Preyer Federal Building in honor of Lunsford Richardson Preyer, a former federal Judge, six-term U.S. Congressman and resident of Greensboro. Limited public access. 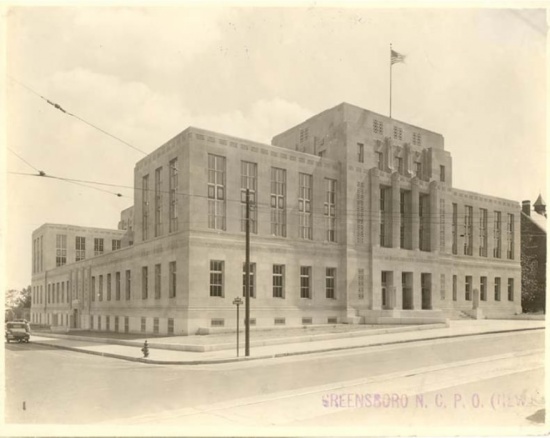