The United States Marine Corps War Memorial honors those Marines who gave their lives in service to the nation since November 10, 1775. The Pulitzer Prize-winning photograph that inspired the monument showed six men, including Ira Hayes (Pima), raising the US flag atop Mount Suribachi, symbolizing victory at Iwo Jima and in the World War II Pacific campaign.

Ira Hamilton Hayes (January 12, 1923 - January 24, 1955) was born on the Gila River Indian Reservation in Arizona. At the age of 19, he enlisted in the US Marine Corps Reserves and trained as a parachutist; he was promoted to the rank of corporal in 1945.

On February 23, 1945, Hayes helped to raise the flag at Iwo Jima--an iconic moment captured in film. Over a course of three years, sculptor Felix W. de Weldon used the photograph, along with live modeling by Hayes and others, to construct the 100-ton bronze monument. It was dedicated by President Dwight D. Eisenhower in 1954, on the 179th anniversary of the establishment of the US Marine Corps.

Ira Hayes was buried with full military honors on February 2, 1955. Many continue to pay their respects to this American hero by visiting his gravesite at Arlington National Cemetery, Section 34, Plot 479A. 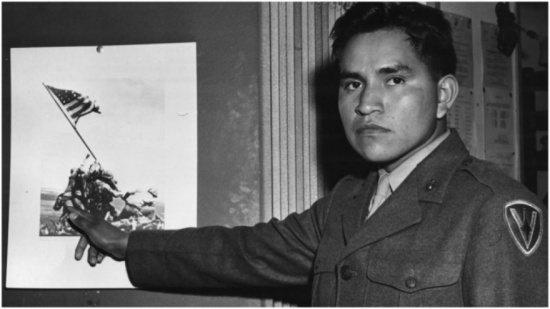 US Marine Corps War Memorial with Ira Hayes
Photo By: