Announced in the May 31, 1883 Greensboro North State, this building was part of a trio of similar buildings known as the "Commercial Block" when constructed by three investors. As reported in the newspaper article, "The new block of buildings now in course of erection on the west side of south Elm street, will be a valuable ornament to the city. The celerity with which the work is being pushed reflects great credit upon Mr. J. A. Lambert under whose supervision it is being carried out. It seems to have been commenced under the rule of three, which proves “that is one mean takes ten days to do a piece of work, ten men could do the work in one day.” The projectors and owners of the property are Mess. G. W. Armfield, W. E. Bevill and Isaac Thacker."

The southernmost element of the trio was destroyed in the 1960s in order to widen West Washington Street. The northernmost component has been heavily remodeled for use as the Montgomery Ward Department Store, and now is occupied by Triad State and the Pearl Theatre.

The central structure of the three remains most preserved. Known as the Vernon Building, it stands as the earliest documented building remaining in the Old Greensborough Historic District. Its architect was Will Armfield of Greensboro. Interestingly, the building’s second owner, R. L. and Virginia Vernon of Charlotte, provided the building’s present name by placing their surname in the entablature after reconstruction due to a disastrous fire in February 1900. The building found itself on a corner location at Washington and South Elm Street in the 1960s after its southern neighbor was demolished. In 1996 the building was restored, and its southern party wall reconstructed to conform to its new role as a corner building. Private. 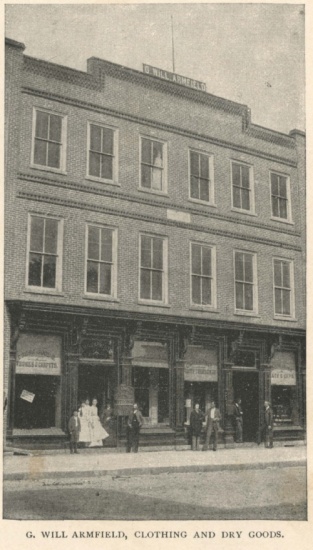