The Washington Grays Militia Unit was organized in Philadelphia in 1822 and soon became one of the city’s most popular military outfits. Later named the Artillery Corps, Washington Grays, the unit served with distinction in the Civil War and remained in existence until 1879, when it merged with the First Regiment of the National Guard of Pennsylvania.

The Washington Grays Monument was initiated in 1871 by Edward N. Benson, who donated $2,000 for the erection of “a granite monument in a proper place to the memory of the gallant comrades who fell in the war for the union.” Artist J. Wilson first built the monument’s base, which was unveiled at Broad and Girard Streets in 1872 and relocated to Washington Square in 1898. In 1906, a committee of the Old Guard was appointed to procure a bronze figure to place on the top of the monument, which was dedicated in 1908 in Washington Square. The monument was moved to Lemon Hill in East Fairmount Park in 1954, and then relocated to its current site in front of the Union League of Philadelphia in 1991. The plaques around the monument’s granite base list the unit’s Civil War record with the added inscription: “To our fallen comrades 1861-1865.” 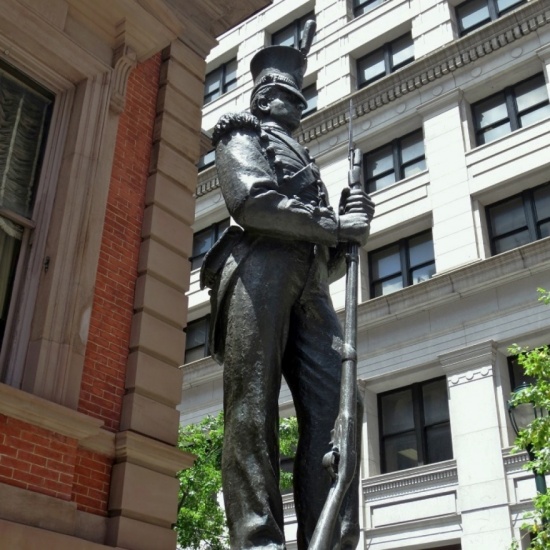