Information on the development of Douglaston during its earlier years is sparse, as the dominant white owned newspapers rarely covered the community, but the emergence of Black-centric newspapers began to change that.

On January 7, 1837, the Weekly Advocate debuted in New York City as a journal “Established for, and Devoted to the Moral, Mental, and Political Improvement of the People of Color.” Only a few months later the paper was rebranded by its new editor, Samuel Cornish, to the Colored American (see images for an 1841 article). For the duration of its run, the paper covered the discourse over abolitionism, civil rights, and general welfare of people of color in the United States not only nationally or statewide, but locally as well. Wilson Rantous himself was involved in financing another Black-centric, Black-owned newspaper called the Weekly Anglo African.

Wilson Rantous wasn't the only person working to make life better for people of color in Jamaica. He had quite a bit of help from another free Black man named Samuel V. Berry, with whom Rantous worked on a number of community building projects. Berry was a prominent member of the free Black community in NYC, born c. 1813 in New Jersey, and educated at the Episcopal Theological Seminary before becoming a priest at the African Episcopal Church (which was located on this site). Exactly when Berry arrived in Jamaica Village is unclear, but he quickly became involved in the efforts to improve the condition of his fellow citizens of color in the community.

One of the first things Berry did in 1837 was establish St. Mark's Free Episcopal Colored School at the African Episcopal Church, which was supervised and financed by the Rector, William Lupton Johnson, of Grace Episcopal Church (a later stop on our tour!). Berry advertised the school in the Colored American in February of 1841 (see images). A few years after its establishment, a review of the school was published in the Long Island Democrat -- a white-centric newspaper -- and states that the curriculum for St. Mark's 59 students (25 boys and 34 girls) included reading, writing, arithmetic, and geography. The article also confronts racist pseudoscience that was commonly believed in the white community, asserting that "the colored children were not a whit behind white children" and "any gentlemen desirous of being fully convinced of the practicability of educating the colored population" best go to the school to "have his prejudices and erroneous notions corrected." Some of the children schooled at St. Mark's came from other nearby villages, but many of the children were local and probably lived in or around Wilson Rantous' Douglaston. St. Mark's also provided classes for adult students in basic academics like reading and writing, an invaluable resource for Black citizens who may have been previously enslaved and barred from education altogether.

Today you can see that another educational institution, York College, sits on the site of St. Mark's, serving one of the most diverse places on the planet. Among them, Queens residents speak 138 languages and Queens itself is the most ethnically diverse urban area in the world. Walking through Jamaica on this tour, you may have heard Spanish, Kreyol, Yoruba, Bangla, Arabic, Hindi, and Urdu, as well as English out on the street. 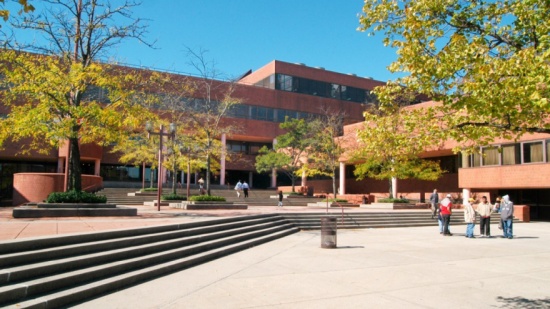 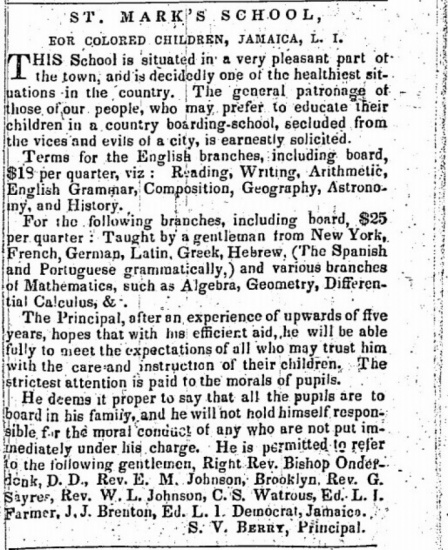