Behind the Bund, this street is part of what is known as Waitanyuan (including the parallel Huqiu Lu to the west, which was known as Museum Road in the 1930s), an area that was home to many cultural and religious institutions in the 1930s. It has been slated by the Shanghai government for long-term redevelopment, while preserving a number of heritage buildings. (When complete, Waitanyuan will be bordered by Nan Suzhou Lu in the north, Sichuan Lu in the west, the Bund on the east, and Dianchi Lu in the south.) The initial phase included making this a pedestrian-only street at the center of Waitanyuan Plaza, and restoring the buildings along the western side. Starting at the top at no. 209, the former China Baptist Publication Society Building is a superb red and brown brick structure by Ladislav Hudec, completed in 1930. Running south, in a row of gorgeous buildings (pick your favorite) are the 1927 Lyceum Building, the 1923 Associated Mission Building, the 1927 Somekh Mansion, the 1933 YWCA (the YWCA's primary mission was to educate, not proselytize, and was the only foreign organization allowed to continue operating after 1949), the 1904 Yuanming Yuan Apartments, and the stately 1908 Ampire Building. To the east is the Peninsula Hotel with its gallery of luxury shops.

Turn right (west) at Beijing Dong Lu, passing the 1897 Andrews and George Building, and the 1929 National Industrial Bank of China, and take a right (north) onto Huqiu Lu where you'll find your next point of interest. 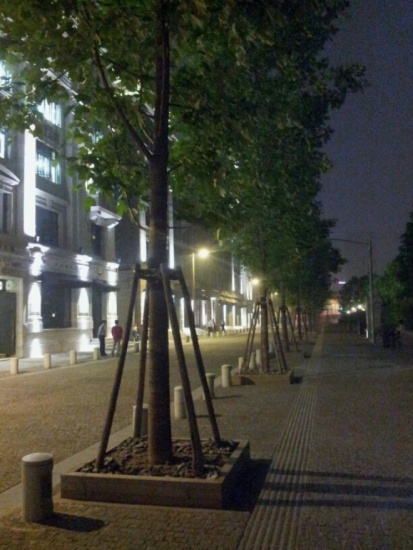