Explore the history of this little enclave off Upper Street, Islington

In 1750 Pitcairn was elected as physician to St Bartholomew’s Hospital, becoming treasurer in 1784 and from then on lived in the treasurer’s house in the hospital. He acquired his “country residence” (as the Dictionary of National Biography described it) in Upper Street, Islington, in 1772 and created a five acre botanical garden behind it. He was an accomplished botanist who employed collectors in the East and West Indies.

After Pitcairn’s death in 1791 his house and garden were sold by auction and acquired by John Wilson (1753 – 1826). Wilson was a prosperous merchant in silk cloth with warehouse and offices in Wood Street, Cheapside. Following the purchase of Pitcairn’s estate, Wilson moved from Highbury Place to Pitcairn’s house, which was located in Upper Street on the southern corner of what is now Almeida Street.

The Islington Literary & Scientific Society was founded in 1832 and met in rooms in No. 133, now flats over two shops..This watercolour shows the buildings to the right of the alleyway next to it, demolished in 1888 when Upper Street wa... Read more
2

Houses on the corner of Almeida Street

Looking at the Almeida Theatre

In 1837 land behind the new houses at 138-140 Upper Street was leased to the Islington Literary & Scientific Society where they built the premises now occupied by the Almeida Theatre. That society had been founded in 1833 and originally... Read more
4

Looking across to Nos. 1-4 Almeida Street

At about the same time as the construction of the Lit & Sci in 1837, Nos. 1-4 Wellington (now Almeida) Street (two linked pairs of semi-detached houses) were built by the Wilson estate as part of an intended new square. They had been bu... Read more
5

After the building of the Literary & Scientific Institution and Nos. 1-4 Almeida Street in 1837-8, the remainder of the estate was let as market gardens until 1846, when the Manor of Barnsbury granted licence to demise their copyhold pr... Read more
6

After the building of the Literary & Scientific Institution and Nos. 1-4 Almeida Street in 1837-8, the remainder of the estate was let as market gardens until 1846, when the Manor of Barnsbury granted licence to demise their copyhold pr... Read more
7

Around 1970 Battishill Gardens were created by Islington Council as part of a wholesale redevelopment of the central block (excluding the Almeida Street frontage) with a small park fronting Battishill Street and pairs of maisonettes along N... Read more
8

A small paved area on the Napier Terrace side of Battishill Gardens includes a 19th-century stone frieze originally carved by Musgrave Watson in 1842 for the Hall of Commerce in Threadneedle Street, which was demolished in 1922. There is a ... Read more
9

The present terrace of 11 three-storey town houses with integral garages on the west side of Napier Terrace was built in 1980/81. It reprised an award-winning design by Michael Brown Associates which had been used in their 1972 development ... Read more
10

Looking across towards the back of Nos. 1-4 Milner Square

The British Syphon Company’s factory was built around 1897 on the site of the former Islington Proprietary School fronting Barnsbury Street and in 1936 expanded into Nos. 1-4 Milner Square. The factory was demolished in 1984 and redevelop... Read more
11

The Metropolitan Street Improvements Act of 1883 (inter alia authorising the widening of Upper Street from Islington Green to the Unitarian Chapel on the east side and from Waterloo Terrace to Barnsbury Street on the west side) required the... Read more
12

Opposite Premier House, Bouton Place is a gated courtyard development by Aitch Group, built around 2004.  Eight houses and 6 flats face each other across a narrow space, with 2 ground floor offices facing Waterloo Terrace.  The name deriv... Read more
13

According to Dent’s 1805/6 Survey of Islington, in addition to Dr Pitcairn's estate Wilson also owned 9 houses in Upper Street between Barnsbury Street and Terrett’s Place (as well as one in Terrett’s Place itself), which included tho... Read more
14

At the far end of this paved alleyway is an interesting Georgian building, No. 3 Terrett's Place, dating from before 1746, which extends behind the buildings on the right so is twice as wide as the visible facade. In his will John Wilson le... Read more 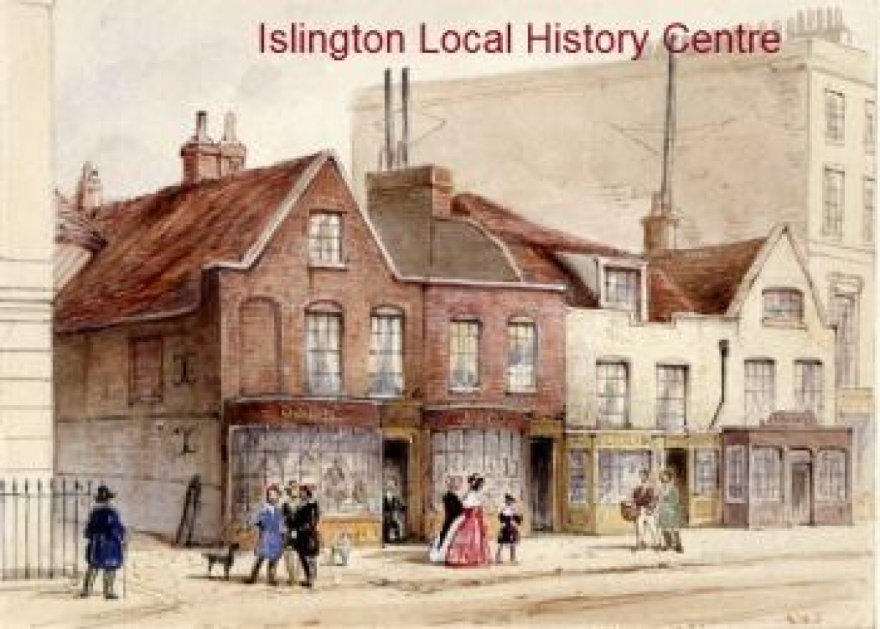 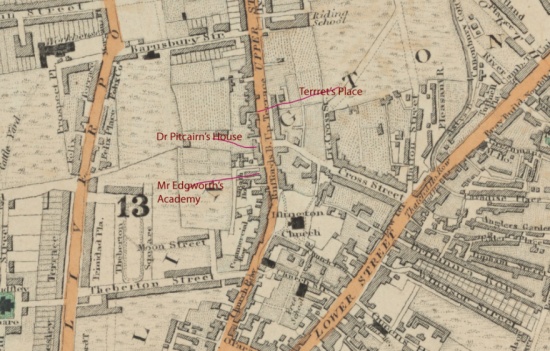 Upper Street looking at 133, built as Mr Edgcliffe's Academy
Photo By: Map of Upper Street in 1830

Houses on the corner of Almeida Street
Photo By: Dr Strahan's House c.1841 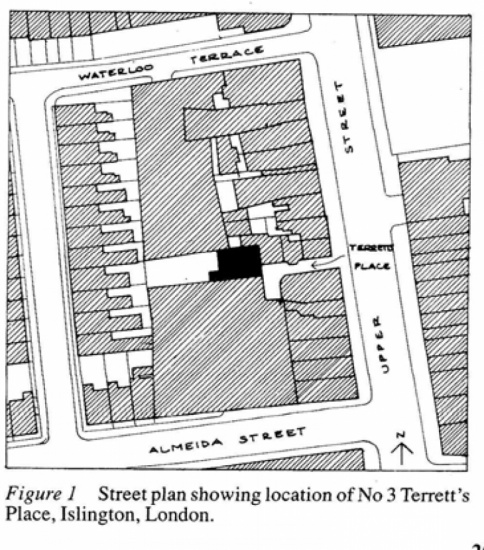