Enjoy the historic charm of this Tompkins County hamlet.

The homes and buildings on this tour appeared on Historic Ithaca's That Old House Tour in 2014.

The hamlet of Brooktondale has seen many name changes since it was settled as a Military Tract land grant. By the early 1800s it was known as Cantinesville (or Cantine’s Mill), after General John Cantine. General Cantine arrived in central New York in 1789 and received a Military Tract parcel along Six Mile Creek, including land that is now Slaterville and Brooktondale. His son, John Jr., built a log cabin in 1798 in the Brooktondale area. In 1800 General Cantine built a gristmill near the cabin. A few years later, in 1804, John Jr. put up the first frame house in Cantinesville, cleared land, and grew crops to provide work for the mill. The first bridge across the creek was built above the mill in 1825.

In 1825 Cantinesville was transformed when William Mott II bought John Cantine’s property. The town, called Mott’s Hollow or Mottville, became Mott’s Corners with the opening of a post office in 1836. Mott owned six mills, several stores, and a furniture factory. He also built houses for families who cleared and farmed his land and produced lumber for him. In 1834 Mott built a new grist mill on the south side of Six Mile Creek and erected a grand Greek Revival-style house across the street.

Other businesses in Mott's Corners included a tannery, a foundry, a brickyard, and a gun shop. Workers began to lay rail tracks near Mott’s Corners as early as 1870, allowing industry to expand in the area. In 1889 a “spidery” steel bridge replaced the “burly” wooden railroad trestle that had spanned the valley.

The name of the town was changed to Brookton in 1883 because of confusion with a Mottsville near Syracuse. In 1926 the name changed again, this time to its current name of Brooktondale.

Brooktondale has a long farming history due to its abundant silt loam soil. After the Civil War, the newly constructed railroads transported the area’s ample agricultural products to other parts of the state. Hay, wheat, milk, and cheese were all shipped to New York City via train. Today several “Century Farms” surround Brooktondale; these farms have remained in the same family for more than 100 years.

Throughout the early twentieth century, Brooktondale was threatened by flooding, with residents moving many houses from precarious locations along the creek banks to higher ground. A severe flood in 1905 damaged many of the buildings lining Six Mile Creek, leading to a reduction in milling and industry in the hamlet. At the same time, the introduction of electricity reduced the need for water power provided by the creek.

During World War I, family farms were unable to produce large yields due to labor shortages. During the Depression, many area farms were abandoned and then reclaimed by New York State. In 1935, the last train ran through Brooktondale and the trestle was demolished in 1936.

After World War II, Brooktondale grew as a residential area less dependent on farming, with more residents commuting to work in Ithaca. Today, both the Community Center (built in 1964) and Brookton’s Market serve as gathering places for what is now a primarily residential neighborhood.

Text adapted from Molly Adams, “Town of Caroline” in the Towns of Tompkins County: From Podunk to the Magnetic Springs, edited by Jane Marsh Dieckman, 1998; Molly Adams, A Brooktondale Neighborhood, 2006; Barbara B. Mix Kone, A History of the Town of Caroline, People, Progress, Pride 1794-1994, 1994.

This Second Empire-style house is distinguished as one of the only brick structures in Brooktondale. It was constructed in the 1870s or 1880s using bricks from John Mandeville's brickyard, which was located slightly west along Brooktondale ... Read more
2

Constructed on the site of a former plaster mill, this building has been a store since its establishment by Frank Vorhis in the late 1880s. Frank Mulks became proprietor of the market in the early 1890s. He was also postmaster and ran the p... Read more
3

From the mid-1800s through the 1940s, this property was the Landon farm. In 1880 Sextus Landon cultivated 19 acres of crops and maintained 8 acres of pasture. As agricultural practices changed, the Landon family also added a small poultry o... Read more
4

Built ca. 1804 for John Cantine, Jr., this was the first frame house in Brooktondale and was known locally as the “Mansion House.” Cantine operated the gristmill in the creek below the house; he cleared surrounding land for crops to pr... Read more
5

This Queen Anne-style house was built ca. 1895 for the Vorhis family, which purchased the gristmill operation originally established by John Cantine and later operated by William Mott. In the 1890s, the lower Vorhis mill had a per-day produ... Read more
6

This elegant Greek Revival-style house features a colonnade of Doric columns and was built ca. 1835 for William Mott II, whose small empire of mills, stores, and a furniture factory operated below the house along the banks of Six Mile Creek... Read more
7

Carpenter Samuel Woodhull built this Italianate-style house ca. 1872. Woodhull lived in Brooktondale from the 1860s until his death in 1917 and likely contributed to the construction of many homes and businesses during the hamlet’s thriv... Read more
8

This small, gable-front house above Six Mile Creek was built in the 1880s along with neighboring 539 Valley Road. Carpenter Samuel Woodhull owned the property and reportedly built the side-by-side houses for two Woodhull family aunts who di... Read more 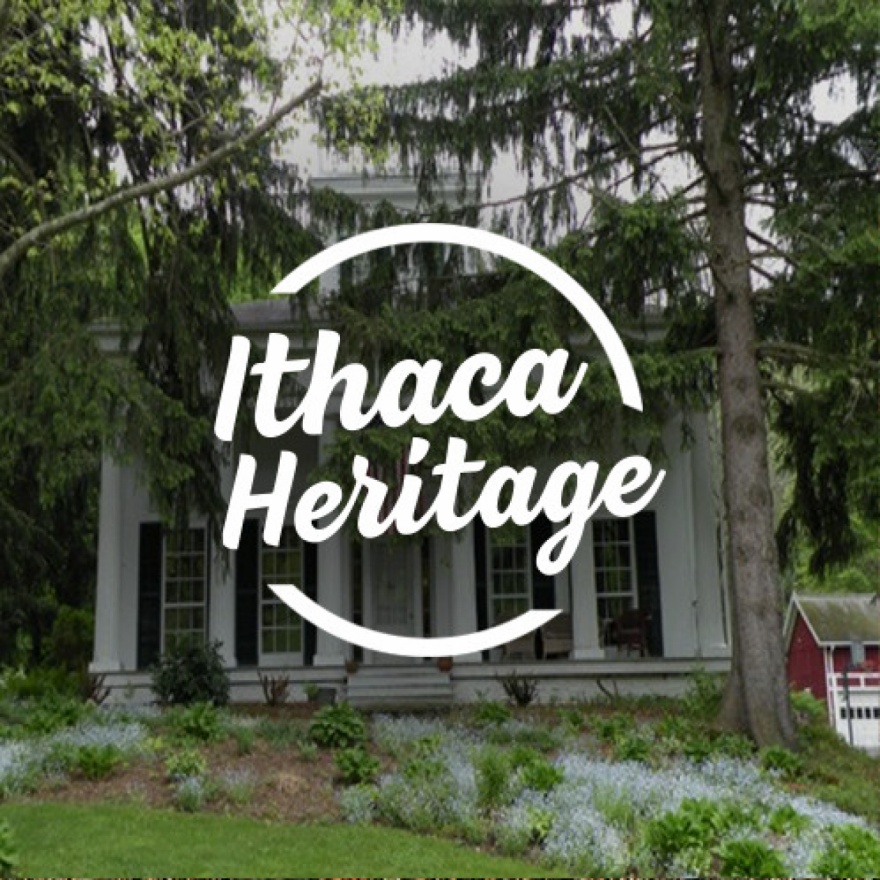 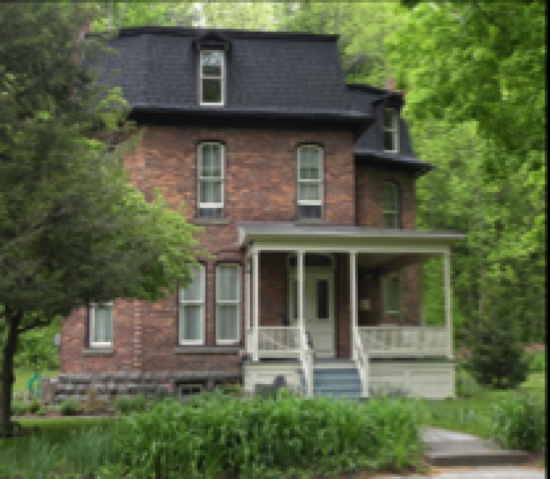 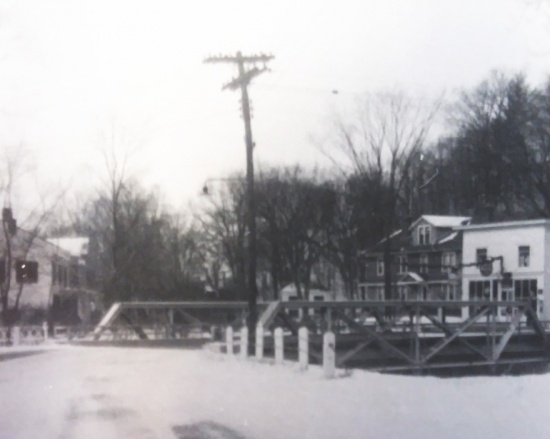 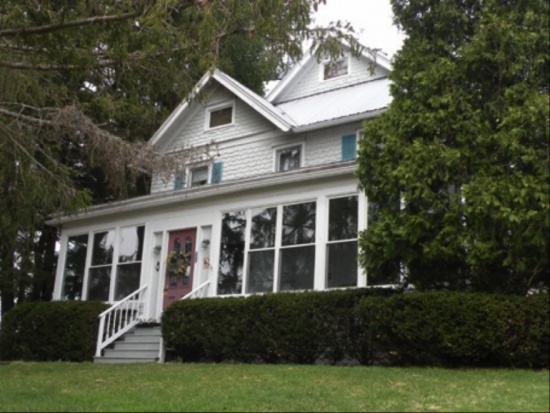 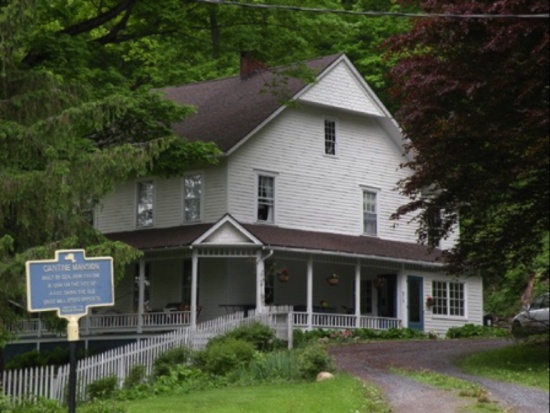 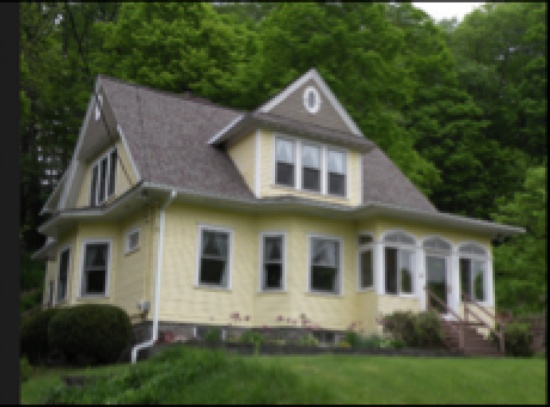 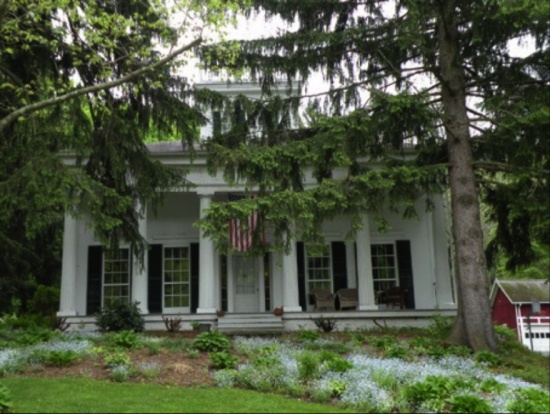 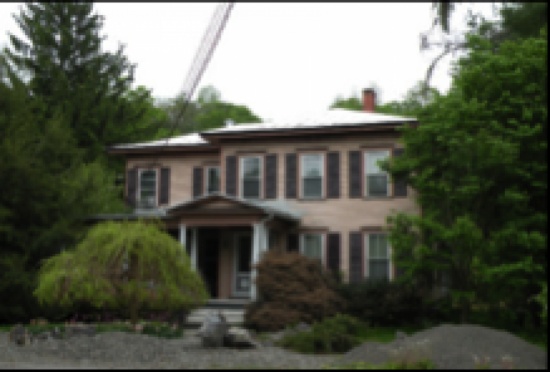 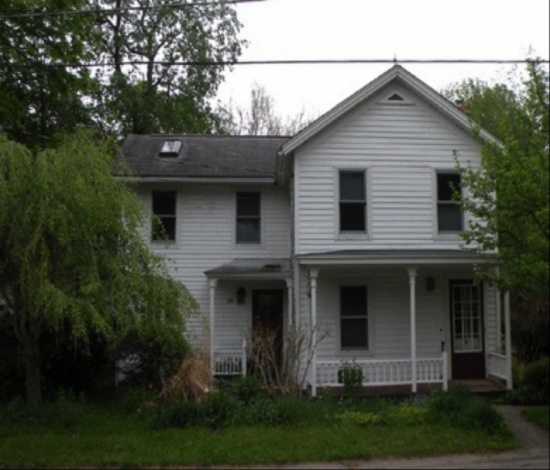