Herron-Morton Place is known as a place for the arts and as a historic neighborhood in Indianapolis.

Parking is most available on North Alabama Street near East 19th Street.

The area that makes up Herron-Morton Place was originally part of a 160-acre land patent granted to Thomas O’Neal in November 1822. The land was sold by O’Neal in 1835 to Samuel Henderson, Indy’s first postmaster, and later its first mayor (1847-1849). This area was largely undeveloped, except for a 36-acre wooded tract, now bounded roughly by 19th, Talbott, 22nd and Central Avenue. In the middle of the 19th Century, it became a popular picnic spot known as Henderson’s Grove. In 1950, Henderson sold the land. 80 acres west of Delaware were purchased by Elizabeth Tinker (the namesake of Tinker Street, whose married name was Elizabeth Talbott), and the remaining area east of Delaware Street was purchased by William Otis.

In 1859, the Indiana State Board of Agriculture purchased the land from Otis to use for the Indiana State Fairgrounds. Several buildings were constructed, including exhibition hall, office, and a number of livestock barns. When the Civil War began in 1861, the area was requisitioned by Governor Oliver P. Morton to be used as a recruiting camp (camp bounded by 19th, 22nd, Talbott and Central). Fairground buildings served as living quarters for 5,000 new soldiers, and the encampment was named Camp Morton.

In 1862, Camp Morton was enclosed with a stout oak palisade and became a prison camp for captured Confederate soldiers. By the war's end, 15,000 rebel troops had been interned at the camp. The peak population was 5,000 men in July 1864. Camp Burnside extended south of Camp Morton to 16th Street, and housed Union soldiers that guarded the Camp.

After the Civil War, it went back to being the State Fairgrounds. The new Exhibition building went up in 1873, designed by Edwin May (later architect of the second, and current Indiana State Capitol Building). The State Fair was held annually on the site for the next 25 years, until the new, and current fairgrounds site was created in 1890.

Indianapolis began expanding around 1870; development efforts were spearheaded by Dr. Horace Allen, a local surgeon, and Deloss Root, a successful banker and investor. Both men were on the Board of the Citizen’s Street Railway Company and helped to improve transportation to the fairgrounds area. As the neighborhood became more accessible, it became increasingly popular as a residential neighborhood.

After the relocation of the Fairgrounds, the former location was purchased by 3 local businessmen, Willard Hubbard, Edward Claypool and Elijah Martindale, who divided the property into 280 residential lots named Morton Place. Designed as an upper-class residential neighborhood, boasting amenities such as esplanades (still seen on N. New Jersey). As Indianapolis expanded towards the end of the 19th Century, the area directly north of 16th Street was perceived as one of the city’s most elegant residential neighborhoods. Most who came to the area between the 1880s and the 1920s were successful politicians, lawyers, doctors, industrialists, and retail merchants

The neighborhood began deteriorating in the late 1930s, as the affluent continued to move ever farther north. Many of the houses were divided into apartments during this time. The deterioration continued to be a problem throughout the 1940s, 50s, and 60s. A considerable amount of housing stock was lost to fires and demolitions. Revitalization efforts began in the 1970s, largely with graduates of the Herron School of Art choosing to stay in the neighborhood and buy and renovate homes.

Herron-Morton was listed on the National Register of Historic Places in 1983, making structures in the district eligible for tax incentives. Revitalization efforts have continued throughout the past several decades. Today, many homes that had been converted into multiple units in the 30s, 40s and 50s are now being converted back into single-family homes, and several new builds are going up on what used to be vacant lots.

Among the oldest houses are Italianate houses of the 1870s (1718 and 1626 Central are examples). Most typical and most numerous are the assorted varieties of Queen Anne style, popular around the turn of the century. The largest and most flamboyant are at 1832 N. Delaware, 2065 N. New Jersey, and 2115 N. Alabama. All Queen Anne homes feature the irregular massing, elaborate wood trim, and a variety of exterior surface treatments.

Some represent a slightly later version of the Queen Anne style, sometimes known as Princess Anne, which was greatly simplified, with considerably less exterior ornamentation. These are 1816 and 2038 N. Alabama; 2117 N. Pennsylvania; 1915 N. Delaware.

The neighborhood also has a number of early 20th Century apartment buildings. The oldest is Warrick Flats, a series of four structures built in 1907, on the west side of Talbott Street in the 2100 block. Most apartments are low-rise structures, two to four stories in height. These apartments were also considered prestigious addresses in the early 1900s. They include 2101 N. Pennsylvania; 1850-56 Talbott; 1902 Talbott.

The Herron-Morton Place area has played a pivotal role in the city’s appreciation for the fine arts. Noted Indiana artists T.C. Steele and William Forsythe acquired property at 16th & Pennsylvania and erected several buildings in 1888--eventually giving rise to the John Herron Art Institute in 1907.

The 2000 block of New Jersey Street is lined with beautiful esplanades. This is a great example of the type of esplanades that used to be very popular in the city.
5

Originally Carol and Everybody's Barbershop, this small cinderblock building on the corner is now home to Studio KG, a hair salon and boutique.  Carol's was the first barbershop owned by an African American woman in Indianapolis. Carol's ... Read more
6

Year Built: 1894 Architecture Style: Queen Anne Key Features: Hipped Gable Decorative Timbering Fish Scale Siding This home is example of one of the many homes that was converted into apartments in the 1940s. This was converted into 2 unit... Read more
7

Year Built: 1896 Architecture Style: Queen Anne Key Features: Limestone Porch Rounded Tower Column Porch Supports This home is a good illustration of some of the nicer, upper-class homes built in the late 1800’s. Built in 1896 by the Itt... Read more
8

When the Civil War began in 1861, the area was requisitioned by Governor Morton to be used as a recruiting camp (camp bounded by 19th, 22nd, Talbott and Central). Fairground buildings served as living quarters for 5,000 new soldiers, and th... Read more
11

Year Built: 1905 Key Features: Gambrel Roof Dormers Brick Construction Many of the homes in Herron-Morton at one time had carriage houses behind them, since the neighborhood was occupied by many affluent residents in the late 1800s. It's n... Read more
13

Year Built: 1909 Architecture Style: Tudor Revival  Key Features: Decorative Timbering Bay Windows and Brick Construction Gable Front This home as well as the next two homes were all bought by Herron School of Art in the early 1960s. This... Read more
15

Year Built: 1910 Architecture Style: Tudor Revival Key Features: Decorative Timbering Flat Roof on Porch and Thin Porch Supports Stucco Wall This home was bought by Herron School of Art in the early 1960s and used as a stage. It is now a si... Read more
17 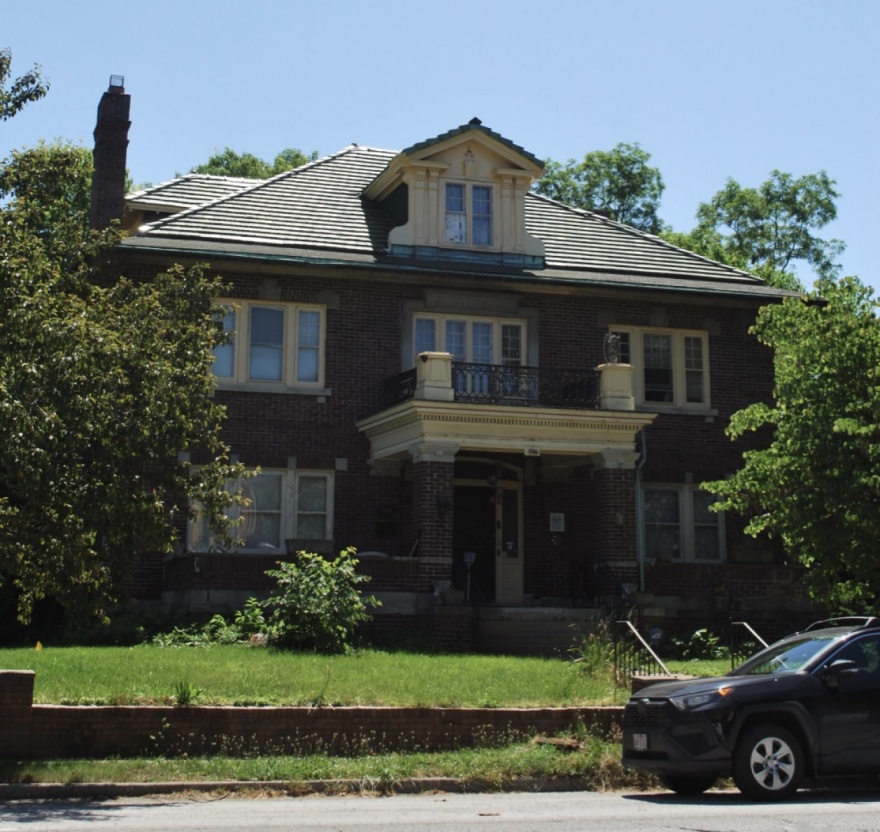 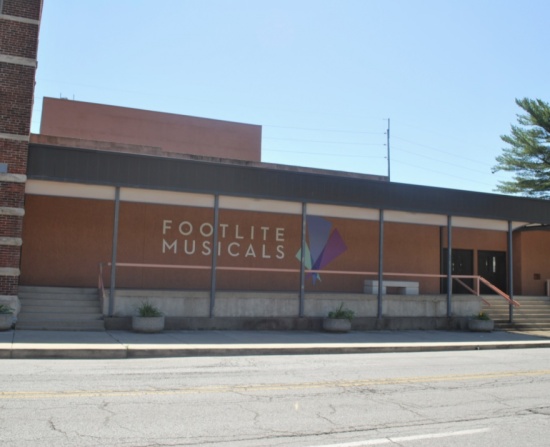 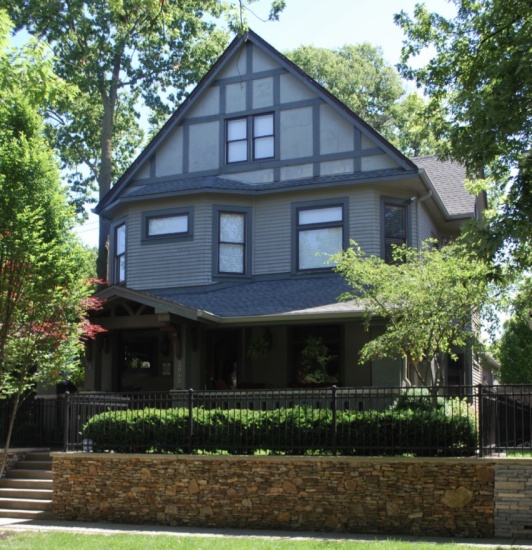 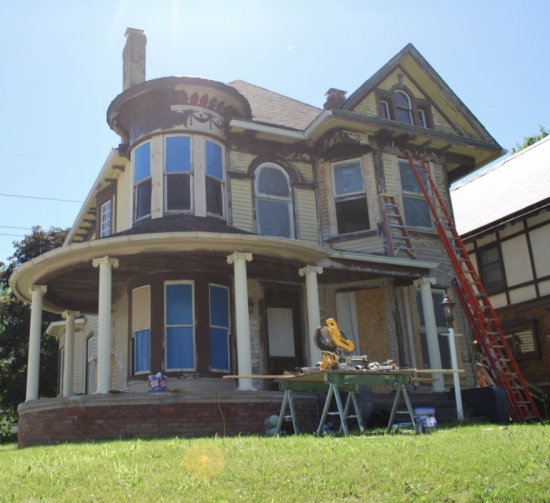 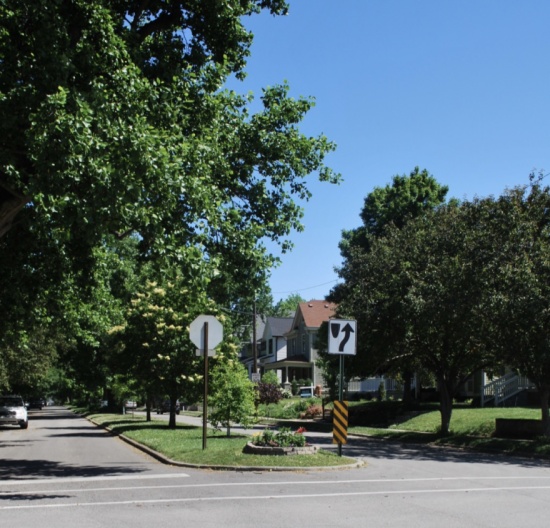 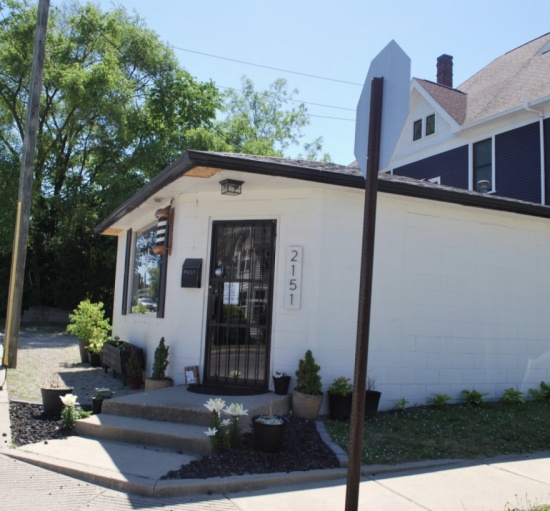 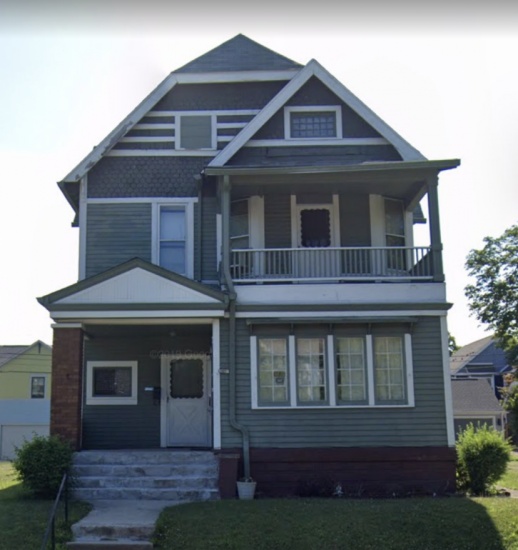 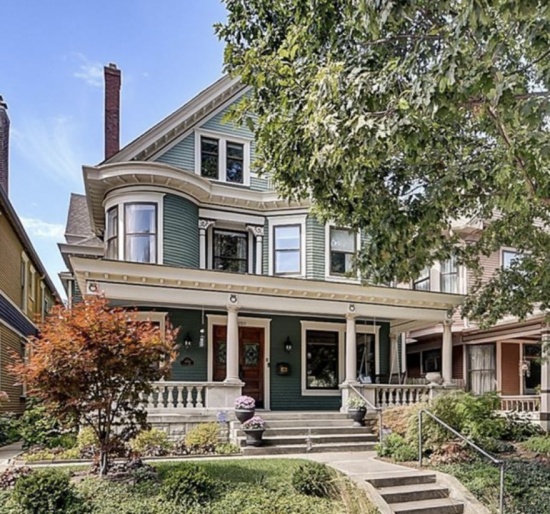 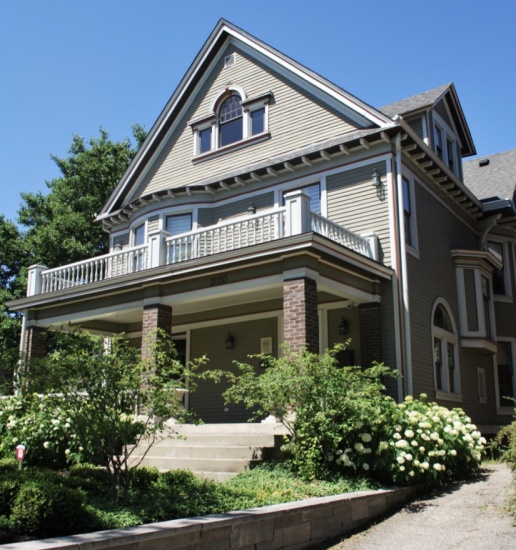 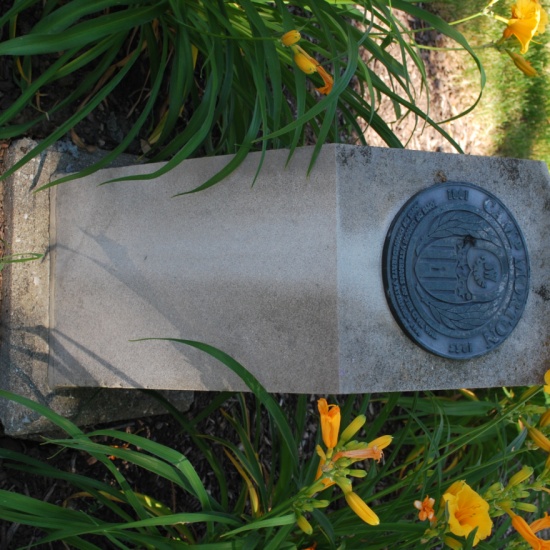 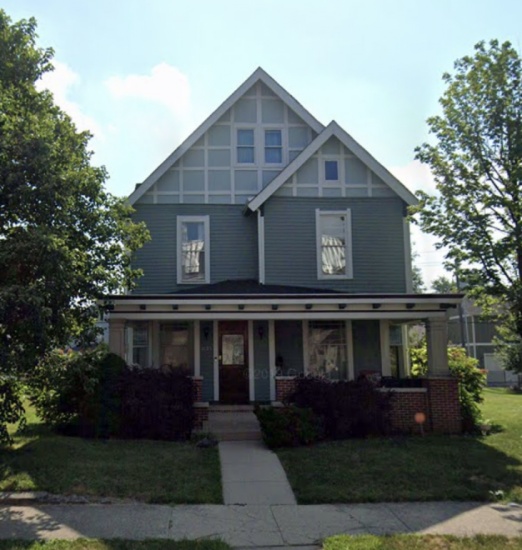 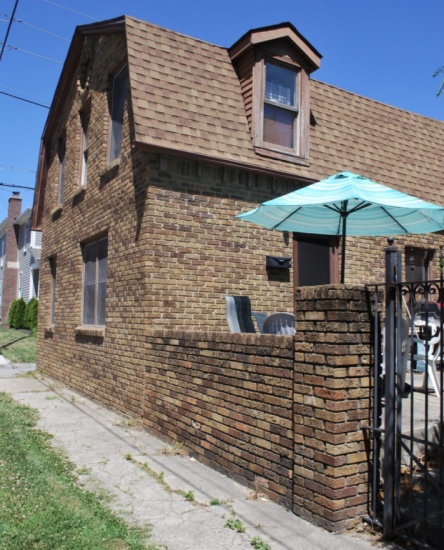 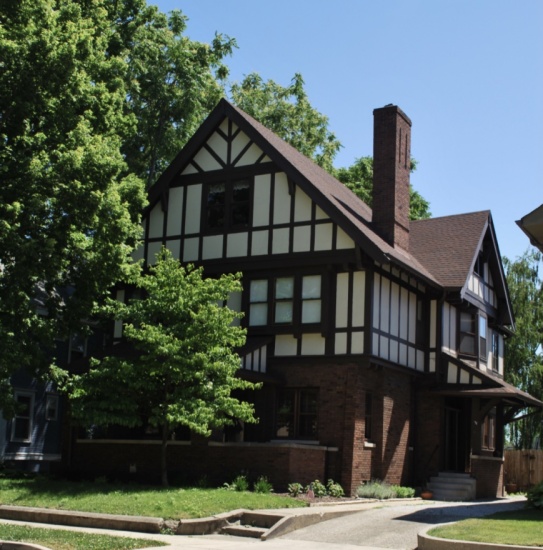 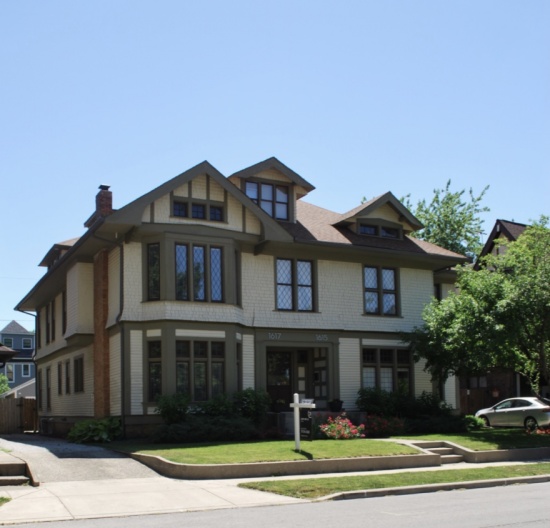 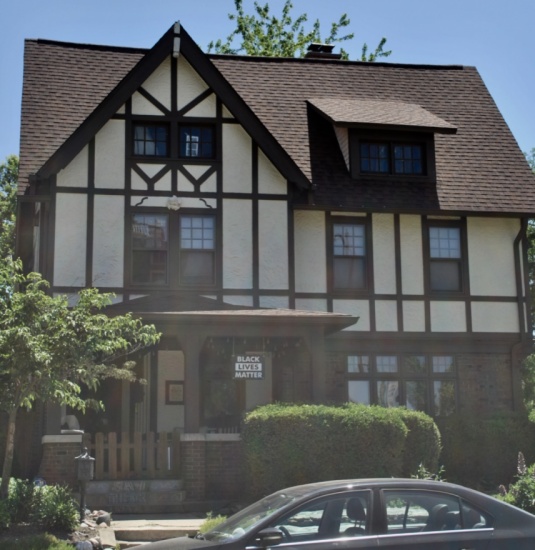 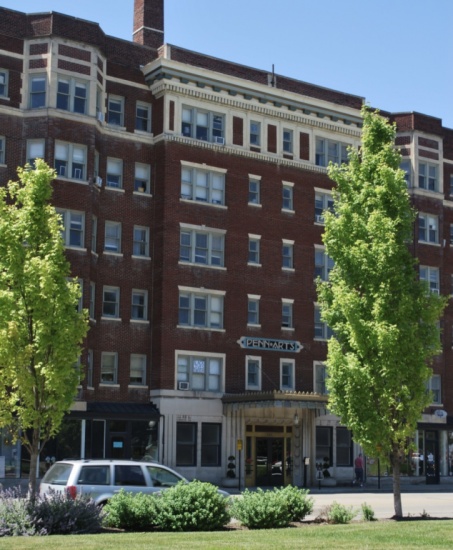 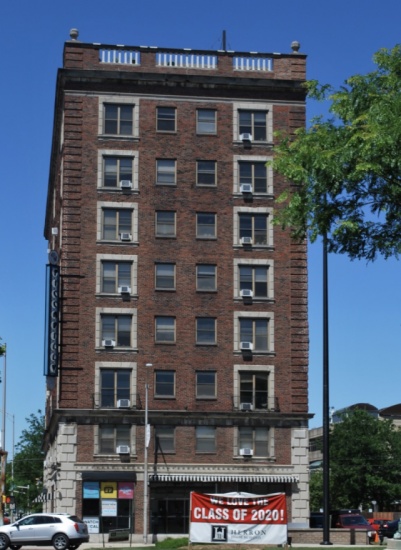 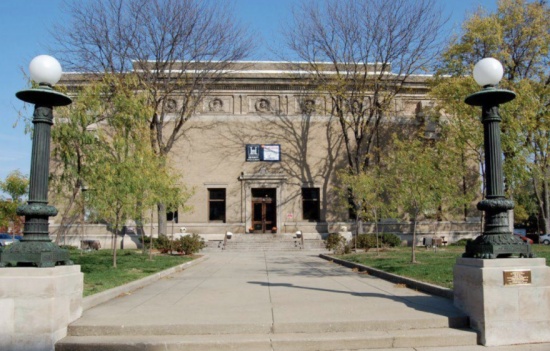