Visit 4 homes in each of 3 Ithaca neighborhoods, learning about the buildings, residents, and neighborhoods in and around 1910.

The History Center in Tompkins County's HistoryForge initiative was the inspiration for this tour (see: https://historyforge.thehistorycenter.net/). On HistoryForge Day on October 7, 2017 (sponsored by M&T Bank), four houses in three Ithaca neighborhoods--Fall Creek/DeWitt Park, Henry St. John, and Southside--were selected to share information about who lived there in 1910. While tour attendees did not enter the homes, docents had a series of questions to engage participants about the lives of the residents of 100 years ago.

From information gleaned from the 1910 census, docents shared details about family relationships, age, race, occupation, literacy, employment, and other attributes. Participants also learned about the buildings and neighborhoods in which these families lived.

The decade from 1910 to 1920 was one of growth and trauma both here and abroad. World War I devastated Europe for much of the decade, and more deaths occurred from the influenza epidemic worldwide (known as the Spanish flu) in 1918-1919 than from the war itself. Americans entered the war in 1917, and more than 40 soldiers from Tompkins County were killed before the armistice in 1918. Dramatic transformations marked the era as well. Assembly-line production brought us automobiles like the Model-T that were accessible to people of modest means. Americans became avid travelers and tourists and some became commuters as jobs could be reached from burgeoning suburbs. Radio and movies helped spread popular culture beyond the regional to national audiences. Suddenly everyone loved Charlie Chaplin and drank Coca-Cola. Democracy reached underrepresented portions of the population as women throughout the country won the right to vote. New York women won the right to vote in 1917, and all American women were granted that right in 1920 as the 19th Amendment to the Constitution was ratified. The National Association of the Advancement of Colored People (NAACP) had been founded in 1909, and steps toward equality for African Americans came with the work of civil rights leaders like W.E.B. DuBois and A. Philip Randolph.

In Tompkins County a terrible fire in 1912 destroyed the Ithaca High School, and in 1915 flooding ravaged homes along Six Mile Creek. The Ithaca Municipal Airport opened near Cayuga Lake and the Thomas Morse Aviation Company built the famous “Tommy Scout” biplane for the British Admiralty and the US Army Air Corps for training pilots in the war. Cornell University expanded with the construction of new dormitories, and the Ithaca Conservatory of Music moved to quarters around the DeWitt Park area of downtown, where it would make its home until the early 1960s. The glamour of the movie industry captivated locals with the popularity of the Wharton Studios. The company leased a large section of Renwick (now Stewart) Park, and local venues were used as open-air sets for filming silent movies. Stars such as Pearl White and Lionel Barrymore stayed in Ithaca while filming, and a lucky few residents were used as “extras” on some films. Trolley rides around the city cost 5 cents, and two major railroad lines connected travelers to the larger nation.

While the cataclysm of World War I and the flu epidemic mark the decade, the larger context of social and cultural change also make it a transformative and noteworthy period for the families highlighted on this tour.

The Fall Creek neighborhood is located near the northeast corner of the City of Ithaca. It lies on Military Lot 94 and on parts of Military Lot 88 and what was once known as the Bloodgood tract. Several waterfalls, including Ithaca Falls, p... Read more
2

130 E Mill/Court Street Built in 1832 or 1833 on property purchased from Simeon DeWitt, this residence incorporates both Federal and Greek Revival details. The stepped gable is common to Federal structures in row-house situations, where it ... Read more
4

DeWitt Park has been the heart of Ithaca's religious, educational, and governmental activities from the community's earliest days and is one of the oldest residential neighborhoods in the city. It received both local and National Registe... Read more
5

Beebe-Halsey House ​Located at: 308 North Cayuga Street This former residence is one of the oldest still standing in Ithaca. It was built in 1820 by Jeremiah Beebe, a prominent banker and one of three partners who built the Clinton Hous... Read more
6

Williams House 306 North Cayuga Street Roger B. Williams, president of the First National Bank, engaged Ithaca architect Clinton L. Vivian to build his home in 1906. Although it could be labeled Colonial Revival, the architectural style is ... Read more
7

This two-and-a-half-story house of frame construction was built prior to 1851 in the Greek Revival style. It is rectangular in plan, with two additions to the west and a small shed-roofed addition on the south façade. It has a wide cornice... Read more
10

This ca. 1881 home is primarily in the Stick style, but it also incorporates elements of Gothic Revival, Eastlake, and Colonial Revival. The large eaves have exposed rafter tails, and the main façade's gable features a decorative truss and... Read more
11

This unique Gothic Revival house was built in 1881 and maintains a high level of architectural integrity. It is a very late Gothic Revival, with massing and form more like a Queen Anne. This building has a number of interesting details, in... Read more
12

Born a slave in 1820, Thomas Jackson escaped from Virginia in 1842 and finally reached Ithaca in 1850. Soon thereafter, the Fugitive Slave Law was passed, and he moved to Toronto for a brief time. Upon returning to Ithaca, Jackson worked as... Read more
14

The residence at 119 Cleveland Avenue was once the home of Sylvester Suzy.  Suzy was born in 1839 in Ontario County, New York. He joined the 8th United States Colored Troop (USCT) in 1863. At the end of the Civil War, he came to live in ... Read more
15

This home located at 501 W. Green Street was the residence of Levi Spaulding, Ithaca’s first African American police officer. He served from 1919 until 1930. He died in the line of duty in 1930 after apprehending a murder suspect near the... Read more
16

Home and Office of Dr. and Dr. Galvin

Located at 401 W. State Street was the residence and office of Dr. Emma Corrine Galvin and Dr. G. Alx Galvin. Dr. Emma Galvin was an accomplished academic and teacher from Richmond, Virginia. She received her Bachelor of Arts from Shaw Univ... Read more 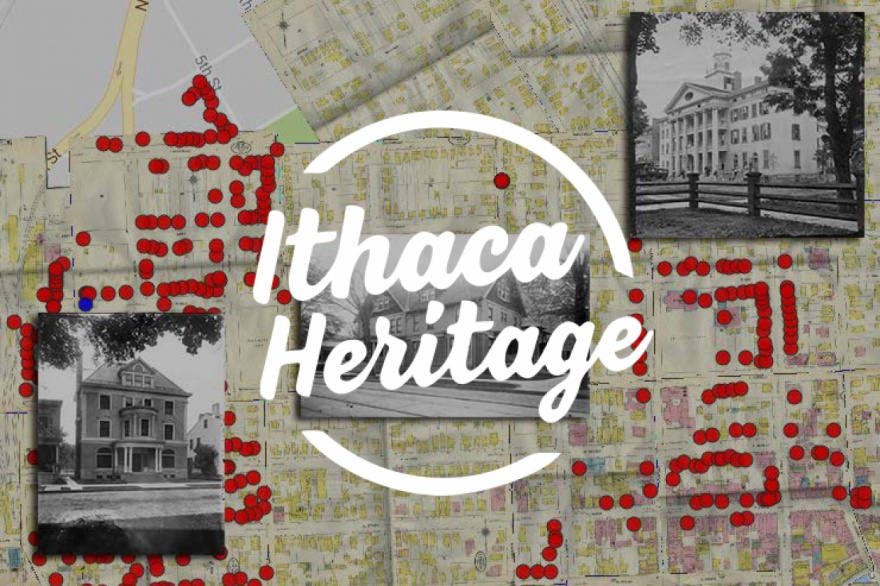 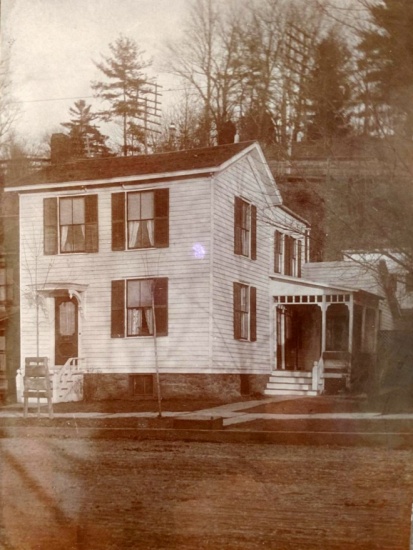 127 Linn Street
Photo By: The History Center in Tompkins County 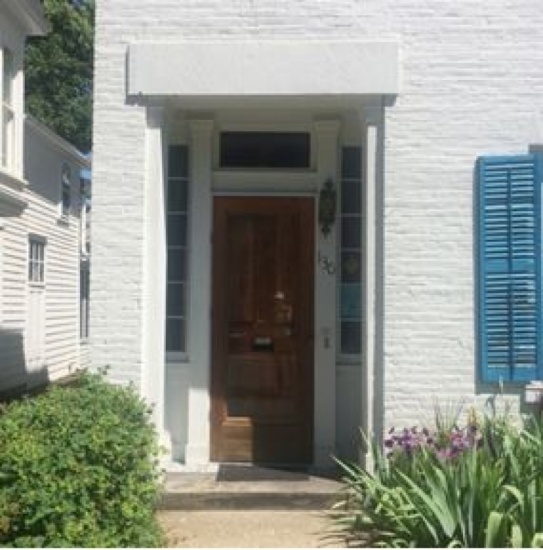 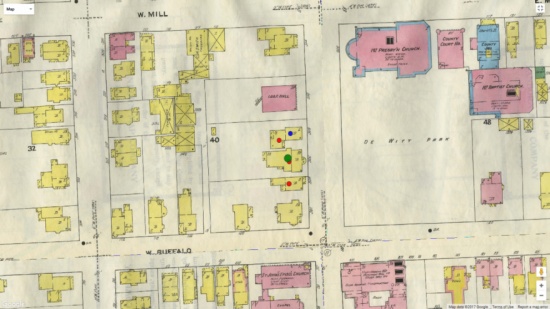 DeWitt Park
Photo By: The History Center in Tompkins County 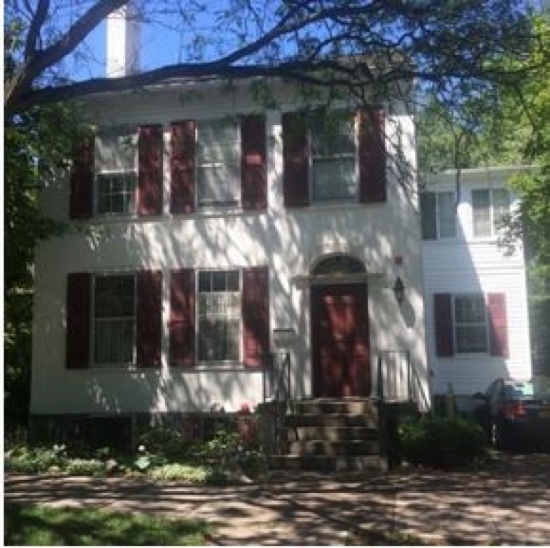 Beebe-Halsey House
Photo By: The History Center in Tompkins County 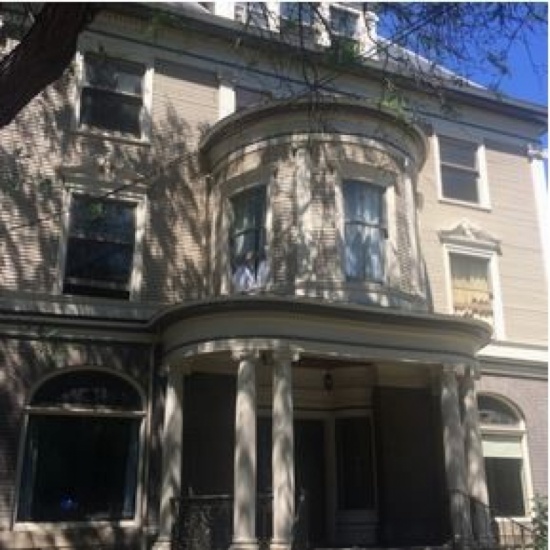 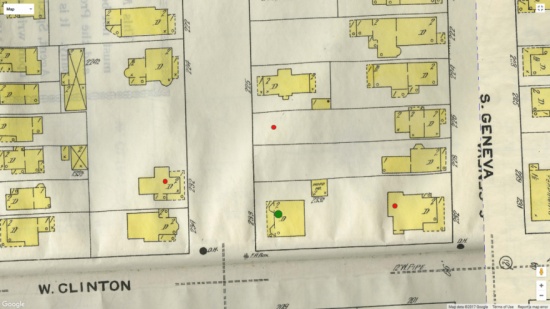 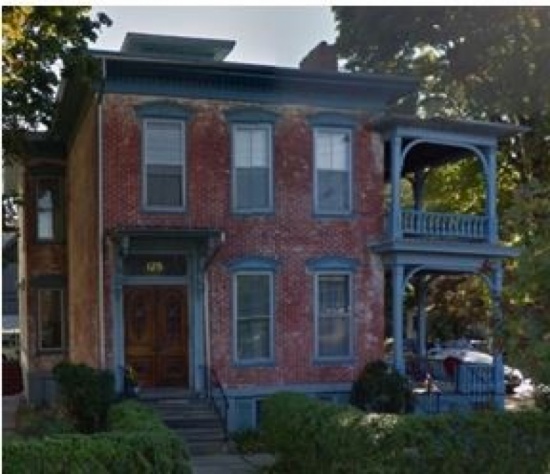 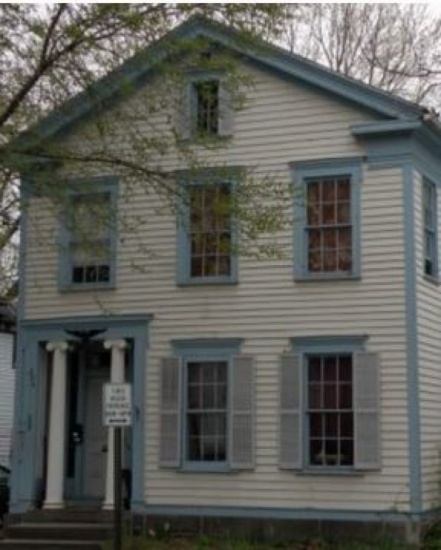 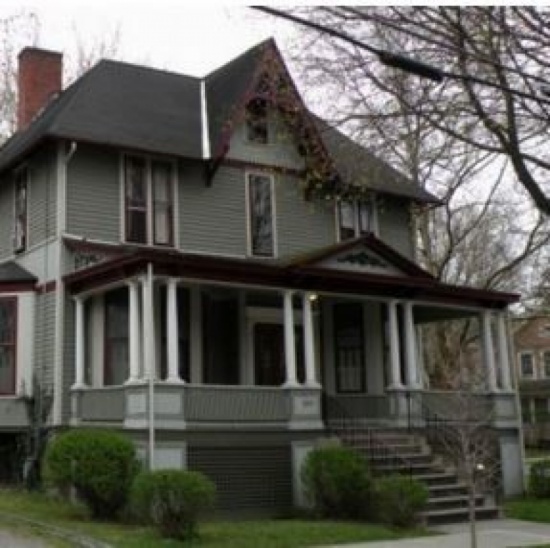 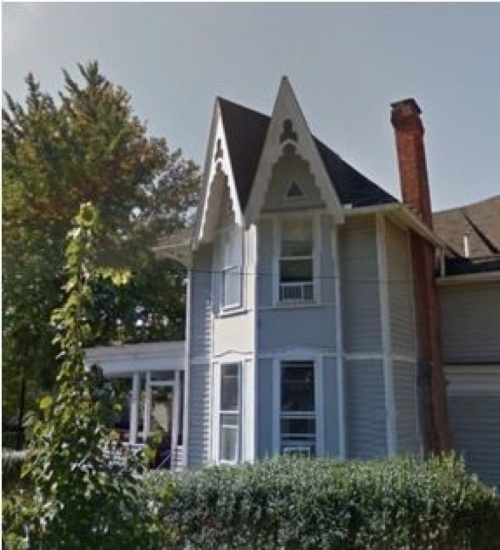 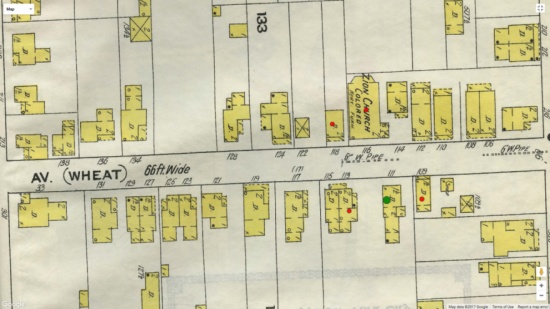 Southside Neighborhood
Photo By: The History Center in Tompkins County 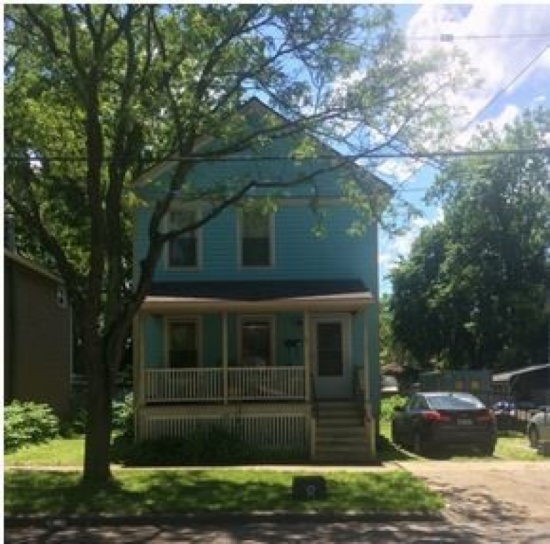 Home of Thomas Jackson
Photo By: The History Center in Tompkins County 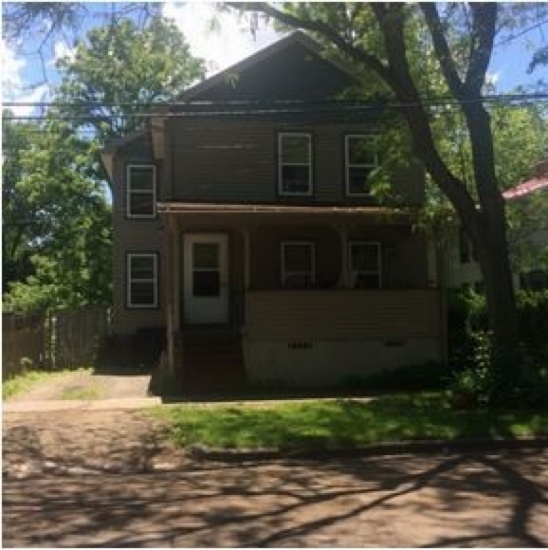 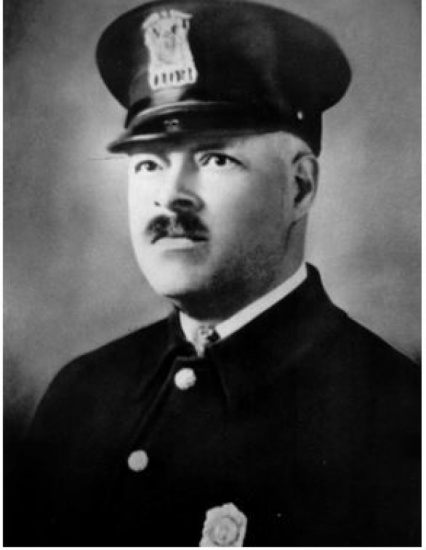 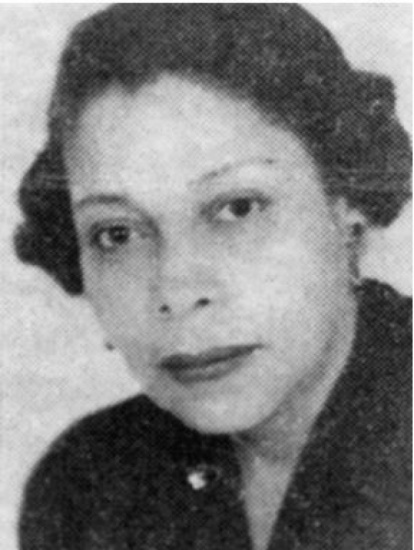 Home and Office of Dr. and Dr. Galvin
Photo By: The History Center in Tompkins County