Explore various sights on campus and around Newport News uncovering the history of William R. Walker Jr. and the emergence of Christopher Newport College

After graduating Walker returned to his hometown with the hopes of finding a job in the area. However, Newport News, like much of the United States, was still recovering from the Great Depression. This economic devastation, coupled with Southern racism and discrimination, made finding a job near impossible for Walker. He returned to his alma mater at Huntington High School and became a mathematics and chemistry teacher.​

After three years at Huntington, in 1936, Mr. Walker became the Community Manager of Aberdeen Gardens, one of the first federal housing community projects launched under the New Deal. It became a great source of pride in the community as it was organized by African-Americans for African-Americans. Here Walker fully utilized his business and engineering expertise. He skillfully managed the program until the 1940s when the project successfully ended, and the homes were sold to its residents.

Wishing to stay in Newport News, Walker created a thriving insurance and real estate business. Through his work with the local chapter of the NAACP, his real estate and insurance ventures always aimed to help African-American families attain better and more affordable housing. ​

William R. Walker, Jr.'s lifelong political activism for social justice was instilled in him by his parents. His father, William Walker, Sr., was one of the few African-American attorneys on the Peninsula. His mother, Letitia Walker, a former teacher, fought hard to get the city to build a high school for African-Americans. Growing up in such a politically active household most certainly influenced Walker in every stage of his life.

In 1957, Walker and other African- American businessmen established the Community Federal Savings and Loan Association. It primarily helped African American families in the city's East End save their money and obtain mortgages to buy their own houses, which they were often unlikely to attain from banks or larger financial institutions. This enabled some families to settle in Shoe Lane, where Walker himself moved around the same time.

As a real estate broker, Walker hoped to establish a "quality subdivision" around Shoe Lane specifically for middle-class African-American families. However, the idea of an African-American community right next to the whites-only James River Country Club unnerved many on the City Council who hoped to uphold the racial status quo within the city. When the city expressed interest in purchasing the Shoe Lane property, Mr. Walker knew that his community would have to come together to fight the decision. ​

In early 1961 the city of Newport News expressed interest in obtaining the Shoe Lane property, with the possibility of making it the permanent campus of the emerging Christopher Newport College. Walker and others in the community banded together to form the Morrison Association in order to speak as one against the potential seizure of their homes.

Despite the community’s best efforts to draw attention to the racial motivations of the decision and that other plots of land were much better choices, the City Council voted on May 29th, 1961, to use the Shoe Lane property for the new campus. The Shoe Lane Controversy, as it has been called, strained race relations in the city and fueled tensions between local residents and Christopher Newport College, which would not see a steady enrollment of African-American students until the early 1970s. ​

Despite losing to the city, Walker had never opposed the establishment of Christopher Newport College itself. Like others, he knew that an institution of higher education would greatly benefit the community. As Walker learned to live with the decision and recognized the positive effects that a successful public college had on Newport News, Walker agreed to later serve on the Christopher Newport College Board of Visitors for four consecutive terms from 1978 to 1990.

In 1990 the College once again sought to expand into nearby residential areas. Walker, who was at the time on the Board of Visitors, was in an awkward position of understanding both sides. Although the situation was resolved when the college instead purchased Ferguson High School from the city, this event revealed the important role that Walker played on the Board of Visitors—both as a representative of the community and the College. ​

William R. Walker, Jr. earned much success throughout his life, but he never forgot his community. Walker served as president of the NAACP Newport News Chapter, the Newport News Teachers League and Federal Credit Union, and the Virginia Association of Real Estate Brokers. In addition, he was a board member to over twelve organizations, including the Community Savings and Loan Association, the Hampton Roads Boys Club, the Virginia Council on Human Relations, and the Peninsula Fine Arts Center. ​Walker also served first as a trustee, and then as a deacon at Carver Memorial Presbyterian Church.

His extensive leadership within these organizations highlight his dedication to civic participation and social justice. Walker was widely regarded as an exceptional community leader. On his 90th birthday, U.S. Representative "Bobby" Scott of Virginia's Third Congressional District recognized his achievement and service above self. Mr. Walker’s actions throughout his life showed his dedication to the belief that everyone should have the chance to learn and succeed. ​

This is the site of William R. Walker, Jr.'s former home at 72 Shoe Lane. Walker had moved here in the late 1950s. As an experienced real estate broker, Walker saw potential in the underdeveloped interior region of Shoe Lane. He planned to... Read more
2

In 1989 Christopher Newport College again sought to expand. Then president of the College, Dr. Anthony Santoro, looked towards the outlying neighborhoods to make this happen, reaffirming an expansion plan drafted in 1979. Homeowners in th... Read more
4

This is the former site of the Roy's Lane tract, the other option that was considered for Christopher Newport College's new campus in 1960. Like the Shoe Lane tract, the property was 60 acres and located off Warwick Boulevard.  The Ro... Read more
5

As a result of the population boom after the Second World War, there was an increasing demand for institutions of higher education in the Hampton Roads area. The city of Newport News and the Commonwealth of Virginia decided that a junior c... Read more
6

This is the former site of the Collis P. Huntington High School, established in 1927. Located in the East End of Newport News, it was an African-American school during the era of segregation. William R. Walker, Jr., who was born and raised ... Read more
7

Aberdeen Gardens was one of the first housing projects started under President Roosevelt's New Deal legislation, the Subsistence Homestead Project. The project began in 1934 when the Hampton Institute, now Hampton University, secured a $245... Read more 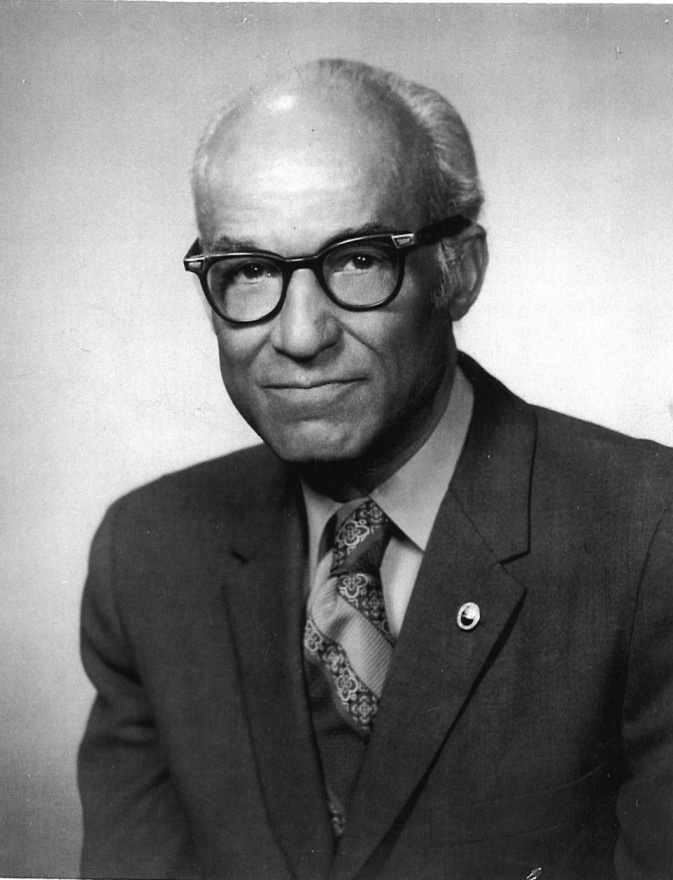 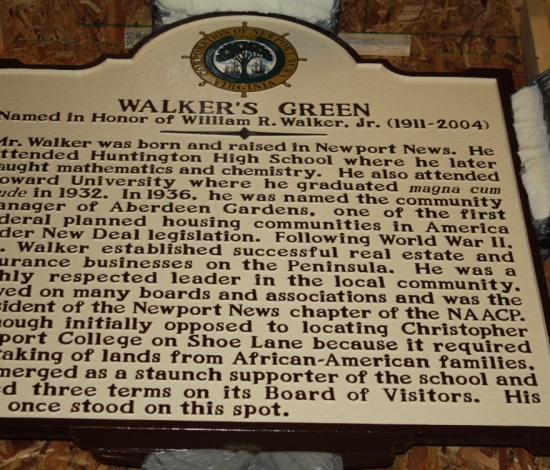 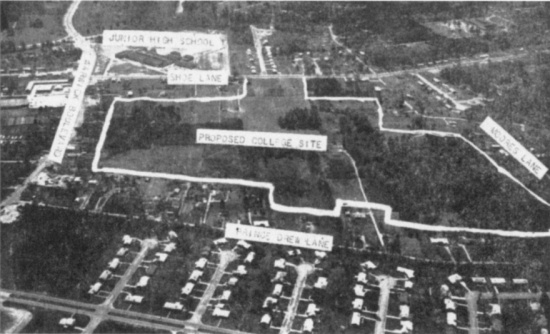 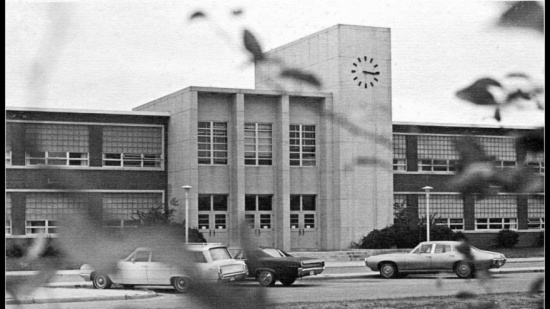 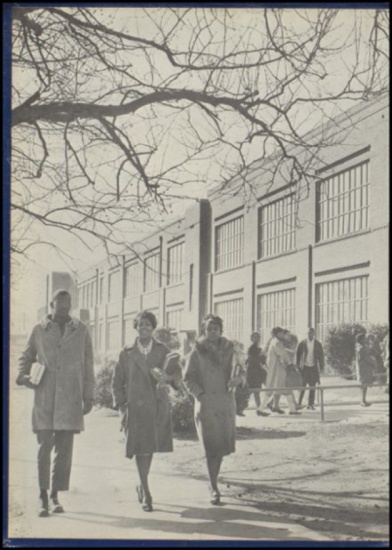 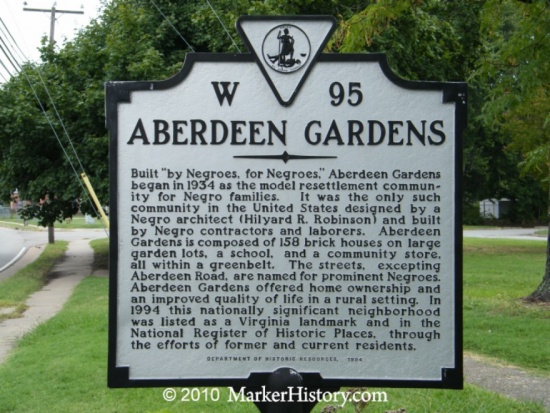