Furman's landscape, ranked frequently in the top ten most beautiful colleges in the country, tells quite a few stories if you know where to look and have this map to help guide you.

The tour will start at Cherrydale Alumni House, a symbol of our antebellum start. Founded in 1826, we’re the oldest private university in South Carolina. The school is named for Richard Furman, a clergyman considered the most important American Baptist leader in the U.S. South.

His son, James C. Furman, whose plantation home has been converted into the alumni house, was the school's first president.

Both of these men have plenty of rhetoric for unpacking, but we’ll also look at campus from the perspective of the native people who first called the campus home, the enslaved and laborers, the women who pushed against the Furmans' views, the eventual students and faculty who pushed desegregation forward, and the Baptists who eventually broke with their own Convention. We'll see much of this history is "hidden" in the current landscape, and note changes suggested by the Task Force on Slavery and Justice report (released July 28, 2018).

Funding and Background the Project

We start at Cherrydale Alumni House because of the inspiration for this history: Abraham. A former slave, Abraham worked for the university’s first president and yet all we know about his life is a blurry photograph of him beside the house and his name handwritten on the back of the same photo. Sponsored by the Seeking Abraham Project (started in 2017) and a grant from the Associated Colleges of the South (ACS), this digital humanities project seeks to investigate and understand the university’s historical associations with slavery, and then make connections in the present and repair historical harms. In other words, this tour is part of the campus reconciling its current views with a past that is often ignored or even hidden. We hope we’ll prompt conversations within our community about a sense of equity and justice that we can start living today.

A special thanks for the help of Jeffrey Makala and Julia Cowart in Furman's Special Collections & Archives.

The places you'll visit were inventoried and described by Furman students in Communication Studies, both in an independent study and Introduction to Rhetoric. Now… let’s begin!

Stand on the front porch of this beautiful antebellum home. Admire the red maples lining the drive. It’s the best view on Furman’s entire campus. Straight ahead is Paris Mountain, on the left is "Blue Wall" of the Blue Ridge Mountains, ... Read more
2

Coming down the hill from Cherrydale, you might have noticed the ROTC complex on the left. To the right, the Paladin on his steed, representing Furman athletics. Between the two, you've hopefully found the Furman Doughboy, a tribute to the... Read more
3

See the long rows of pews extending before you. Let your eyes trace the massive organ from the floor to the ceiling, where you’ll find a beautiful crisscrossing of wooden beams looking down on everything below. Charles E. Daniel Chapel is... Read more
4

The Cross and Mother Church

On the left side of the chapel's interior, look for a prayer room. Inside, high above, you'll find boards affixed into a cross. These boards were taken from Richard Furman's key church, First Baptist of Charleston, after Hurricane Hugo (198... Read more
5

You’re currently standing outside of the Admissions Office. This granite slab is taken from the Faculty Residence in Winnsboro (image attached as it looks today, with granite slabs as hitching posts for horses out front). It's humorous--a... Read more
6

The "James C" in Furman Hall

The Furman campus moved to downtown Greenville, above the Falls of the Reedy River, and remained there for a century. You're standing in front of the oldest academic building on the "new campus," built in the late 1950s, here near Traveler... Read more
7

John E. Johns and the Split

Passing through Johns Hall en route to our next stop, we might contrast the changing values of the university since the time of James C. Furman. The buiding is named for John E. Johns, who served in the Army Air Corps during World War II... Read more
8

Standing in front of the Eugene Stone Soccer Stadium, you’ll see a male soccer athlete statue kicking a ball on the grassy patch in front of the stadium entrance. Step closer to the statue.  Who is this statue representing? These “un... Read more
10

John Plyler and the New Campus

John. L Plyer, the longest serving president of Furman University, oversaw the construction of the entire new campus, serving from 1939-1964. So it makes sense that he is honored in this largest, most opulent academic building on campu... Read more
11

A Fountain of Women Leaders

As we round the corner to end the tour,  we can reflect on the fountains dedicated to two prominent first ladies of the university, Beatrice Dennis Plyler (chapel side) and Elizabeth Lyles Blackwell (library side). In this photo from Cou... Read more
12

Library: Bringing It Together

James B. Duke Library is the last site of the tour, the center of the Furman world. The reflections connect the quad of four academic buildings that stand to its side. To the south of the fountains is Daniel Chapel, representing the religi... Read more 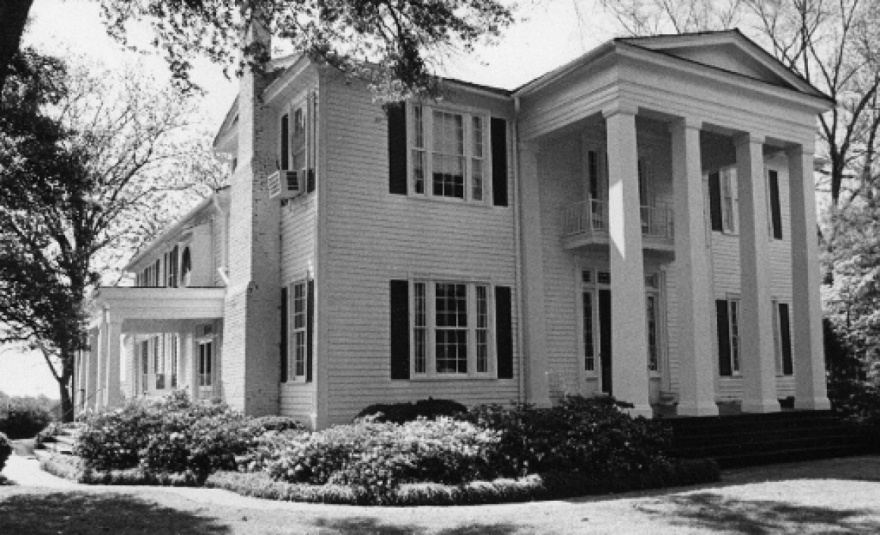 Seeking Abraham at Furman University
Photo By: The home in the 1950s 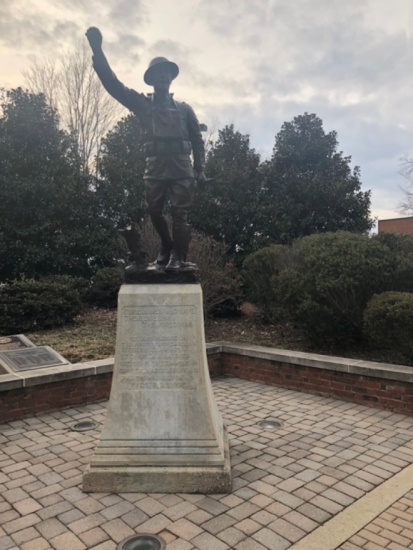 The Doughboy
Photo By: The American Doughboy 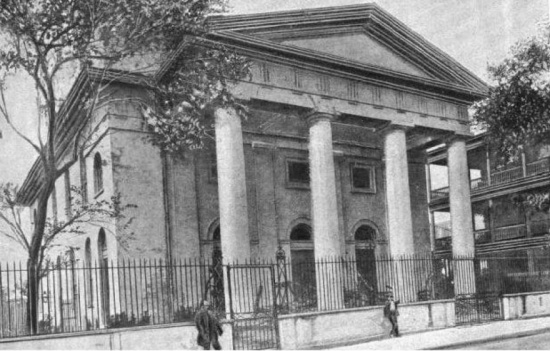 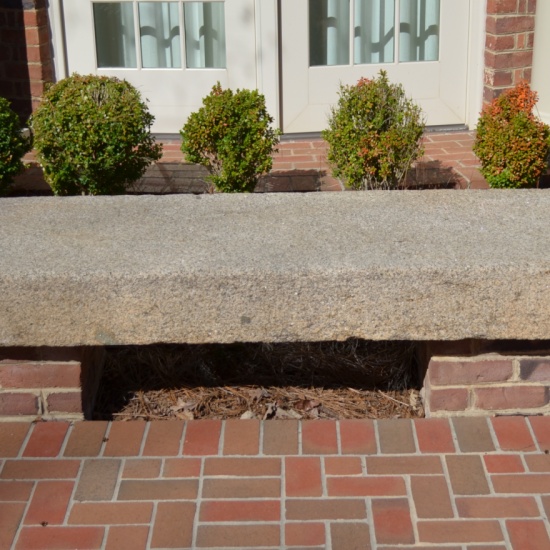 The "James C" in Furman Hall
Photo By: <a href="http://www.ls3p.com/projects/higher-education/furman-university-furman-hall/">Furman Hall </a> 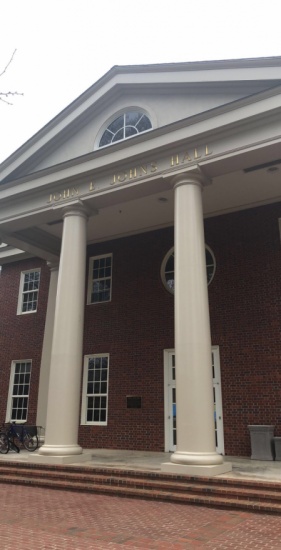 John E. Johns and the Split
Photo By: Johns Hall 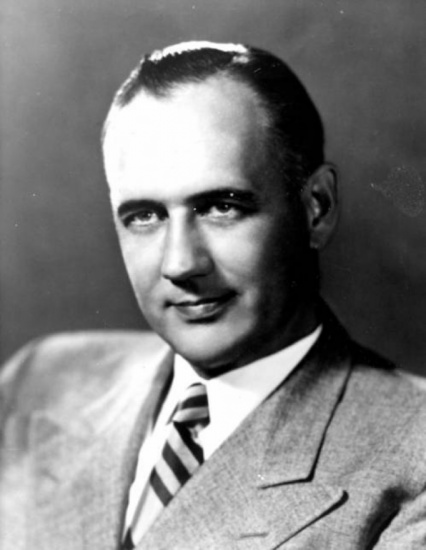 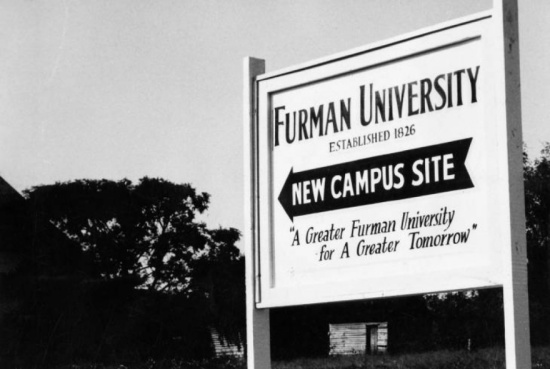 John Plyler and the New Campus 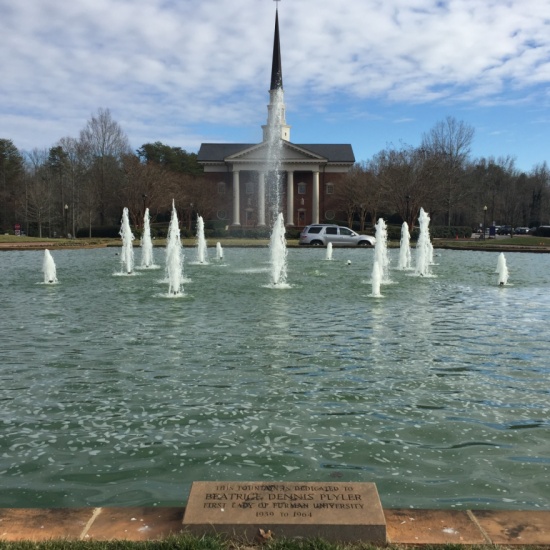 A Fountain of Women Leaders 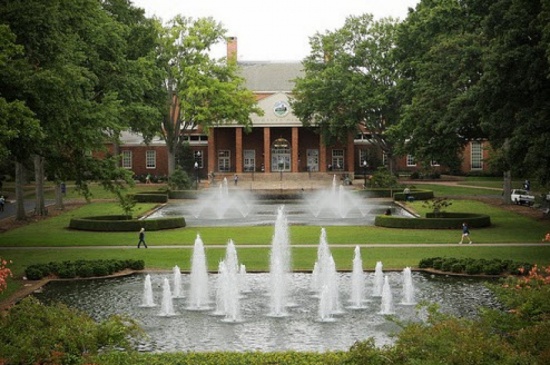 Library: Bringing It Together