This year most of the awarded properties, with the exception of the new paddle hut at the Knollwood Club, are over a century old. The handsome red brick traditional two-story center-hall home at 1350 North Green Bay Road, designed by Winnetka architect Ernest A. Benkert, dates only from 1953, less than seventy years ago. Its classic form, with a forward central symmetrical portion and two recessed wings south and north recalls homes of the Country Place Era, 1893-1942, such as the much-larger red brick center hall colonial at 1050 Walden Road, designed by Ralph Milman for Francis Beidler II, 1942. That late estate era masterpiece appears to be based on a floor plan published in Hermann Von Holst’s 1913 Modern American Homes, PL. 91 (a Boston area colonial house). But postwar inflation and even higher taxes in 1953 dictated the smaller example of the style. By the 1960s the house’s brick exterior was white-washed or painted, then emphasizing its colonial/Federal character, while disrupting its link to the local estate era. The current owner in 2009 with Muran Architects undertook a major rehabilitation, including the return of the original brick’s red color, typical of the period. At a moment when Midcentury Modern has captured the imagination of many homeowners, this example of mid 20th century continuity with the earlier estate era is worthy of serious attention, representative of the large local impulse that was expressed also in smaller classic designs by locals Jerome Cerny and Stanley D. Anderson. 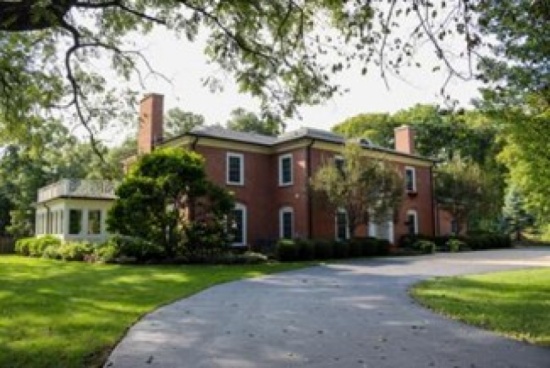