This ca. 1900-constructed house, its design attributed to Frost & Granger, is notable for its distinctive roof design, bow windows, center-hall façade, and front terrace. The roof plan’s origins are described in a 2019 book on Frank Lloyd Wright’s Penwern cottage on Delavan Lake by Mark Hertzberg, with an introduction by Paul Kruty. This roof, like Penwern, employs Japanese Shinto temple flared and partially hipped roof features adopted from the 1893 World’s Fair, Chicago, Japanese pavilion. This roof pattern also is found on the 1903 Trowbridge house by Frost & Granger, 621 College Avenue, and on the 1916 tea house for Nettie Fowler McCormick, East Illinois Rd., expanded by I.W. Colburn, 1958. This home of Rommy Lopat and architect John Drummond was painstakingly rehabilitated by them with Ruggles Architecture ca. early 2000s, preserving the exterior of the house as they found it, with the bow windows by Jerome Cerny and other changes by I.W. Colburn. 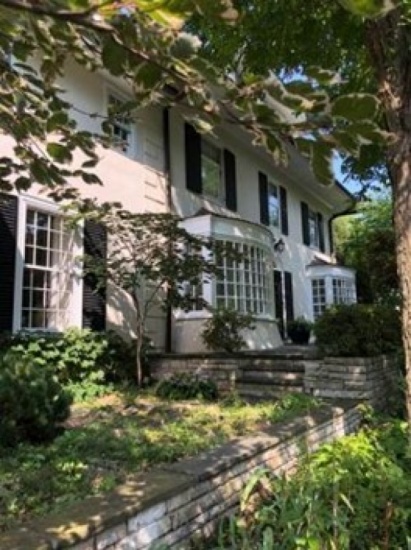