One of the most charming of the smaller homes of the Shaw-designed “Green Bay Addition,” now the West Park National Historic District, is this two-story gambrel-roofed house a few doors in from Green Bay Road on Woodland, facing West Park’s tennis courts. This lot was purchased by C. B. Fitzgerald, a local small businessman and member of the Young Men’s Club, formed in 1905. The 1906 plan by estate owners involved purchase of the east side of Green Bay Road 1830s Atteridge farm to create a neighborhood for local small businessmen and their families, with five-year loans at no interest, the sale taking place in the summer of 1907. Fitzgerald acquired a pre-cut kit for his home, probably assembled by James Griffis, a son-in-law of farmer Atteridge, who lived three doors doors east. The house’s Queen Anne intricate shingle-work on the second floor gable was a key feature of the rehabilitation with a new addition and garage recently completed. 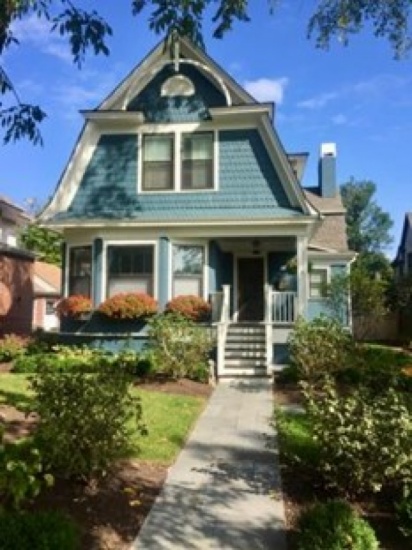