Djamaa El-Djazair is as much a testimony of Algerian independence as it is a testimony to the faith of Algeria’s people. First envisioned by Abdelaziz Bouteflika, This Mosque is the third largest in Africa and has the largest minaret in the world. Prior to 1962 the largest houses of worship within Algiers were the Christian Churches visited predominantly by European immigrants and Peed Noirs. This massive engineering accomplishment is a testimony to the post-colonial cultural shift Algiers has experienced since independence. Construction on the site started in 2012 and would not finish until 2020.

Since the departure of the French from Algiers, it has been the goal of each Algerian administration to remove the French cultural permeation of the city. The impressive stature of the mosque will act as a beacon of faith and help with tourism in the city. Furthermore, its large compound helps meet the dynamic needs of the rapidly expanding and increasingly diverse population with a prayer room, large enough to host 36,000 people. The mosque features a first of its kind fully invasive audio system. This system allows for 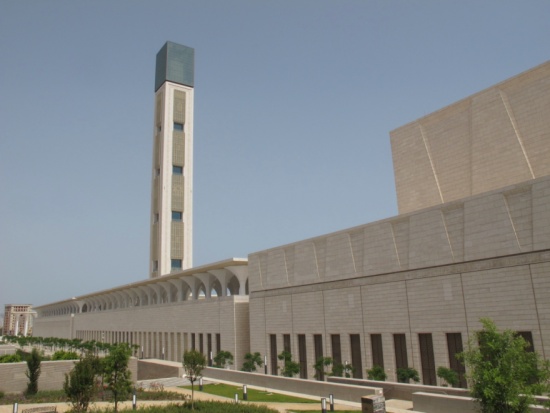