Emir Abdelkader Place Is a large and beautifully landscaped tribute to the last Algerian Sultan to resist the French invasion in the early 1830’s. Emir Abdelkader whose full name was ʿAbd al-Qādir ibn Muḥyī al-Dīn ibn Musṭafā al-Ḥasanī al-Jazāʾirī, was projected as a national hero by the administration of the early Algerian state, to which he is accredited for founding. Outclassed by French technology and combat training Abdelkader and his followers relied on rural populations and the Moroccan Sultanate for support in their struggle against the French. In 1846 Abdelkader surrendered himself to the French serving a short prison term before migrating to the middle east and writing Rappel à l’intelligent, avis à l’indifférent. This statue was erected to honor the heroic past of Abdelkader and his struggle that would not culminate into independence until 1962 roughly 80 years after his death.

This monument is an important representation in the national story of Algeria. There never was a doubt within any colonial territory that the colonial power administrating that land, was far better armed and trained to kill. By erecting monuments to Algerian history, and shaping its future through historical and cultural investments, monuments like the place of Emir Abdelkader help to shape Algeria’s global identity. At its core, the statue represents the enduring legacy of a nation whose history was put on pause for French expansion, memorialized forever through art. While its location of the statue just one block from the MaMa, creates a hub of culture at the heart of the city. 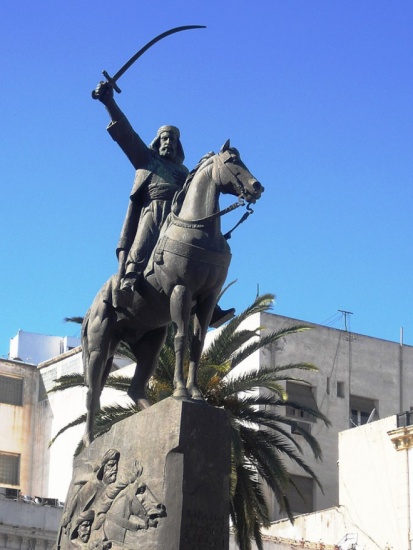