Martyrs' Square places you in the heart of the Casbah of Algiers close enough to the sea to feel it’s cool breeze. What make the sight unique is its metro hub and the Roman, Ottoman, and Byzantian ruins that rest beneath the earth. Located in 2009 during the construction of the Place des Martyrs metro station. Spanning an area of almost two acres the Square is an architectural treasure trove of lost Algerian history and Culture. The Es Sayida mosque, by the Ottoman Empire, the structure was reduced to ruin in 1831 by the French. Further estivation and construction hope to discover more coinage and pottery to better develop a picture of Algiers past.

This intermixing of modern development with the activity of an archaeological dig is providing valuable insight as to how to intertwine these two opposing forces in a rapidly urbanizing world. Furthermore, this site marks a point in history deeply tied to Algiers, within its very soil; point in which its people were not subjugated to French colonialism. In this hidden gem, 7th century Byzantine ruins are being skillfully removed by eager, non-European archaeologists and piecing together a piece of history suppressed by western colonialism until Algeria gained its independence in 1962. Furthermore, this may be the most valuable archaeological project conducted by the post-French government and shows the government’s commitment to national heritage. Today the name Myters' Square is used to honor of those who made sacrifices for Algeria. 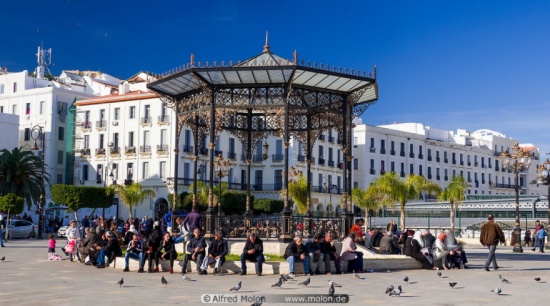