The museum was founded in 1960 and consists of two rooms and an atrium. Entry is only 3€

The important exhibits of the museum include:
-Marble statue of Gorgon (Museum No. 1285), height 1.35 meters. It is almost entirely preserved. Dating from mid 6th century BC, the statue was the central ornament of a temple and was found in an ancient public building in Parikia.
-Two marble relief plates (Museum Nos. 758-759), from the Memorial of Archilochus. Archilochus is depicted on his deathbed on one of the plates, while a lion devours a bull on the other. The relief plates were found embedded into the floor of the atrium of Katapoliani, and date back to the 6th century BC.
-Colossal marble statue of Artemis (Museum No. 1251) from Delian of Paros, height with plinth 2.74 meters. It was the worship statue of the temple, of the same type as the Archaic kore with chiton, and dates from 480-490 BC.
-Marble statue of Nike (Museum No. 245), height 1.35 meters. The head, arms and wings of the statue are missing. It was found in the Kastro of Parikia, Paros, and dates from 470 BC.
-Marble statue of an enthroned goddess (Museum No. 162), height 1.57 meters. The head and arms of the statue are missing. It was found in Agairia, Paros in 1885, by Loewy.
-Marble Ionic capital dating from the 6th century BC (Museum No. 733). Crowning of a votive column from the Memorial of Achilochus. It bears an inscription referring to the foundation of the monument by Domikos (4th century BC).
-Neolithic figurine of a woman sitting with crossed legs with her hands under her chest (Museum No. 886), height 0.055 meters. Found on Saliagos island.
-Marble statue of a kore with chiton (Museum No. 802), height 0.86 meters. It was found at Protoria in Naoussa and dates from the 6th century BC. 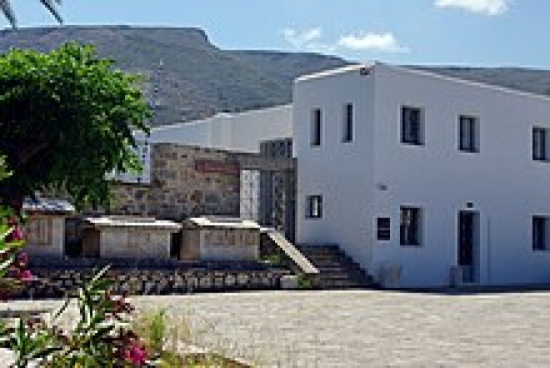