ROUBIDOUX SPRING CHEROKEE CAMPSITE, LAUGHLIN PARK, SPRING RD: Long before Waynesville was platted, Joseph Roubidoux II, a French fur trapper and trader from New Orleans, built a camp cabin near this spring that is now named for him. Many years later, in 1837, and again in 1839, detachments of Cherokee who were forcibly marched from their homelands of Georgia to what is now Oklahoma camped at the spring and on the land that comprises Laughlin Park. This removal became known as the Trail of Tears. In 2015 the National Park Service, along with the City of Waynesville, and the Missouri Trail of Tears Association partnered to install seven interpretive signs detailing this ugly period of history between the spring and the North Street ford. This site is one of only seven certified Trail of Tears sites in Missouri.

This trail connects the (north)Waynesville City Park to Laughlin Park (south). If you take the path to the north the path will take you along the tree-lined Roubidoux River with areas to fish and wade in the river. The walking tour will take you to the south, towards Laughlin Park. Along this trail, you will see National Park Service storyboards that tell the story of the Cherokee's trials along the Trail of Tears. 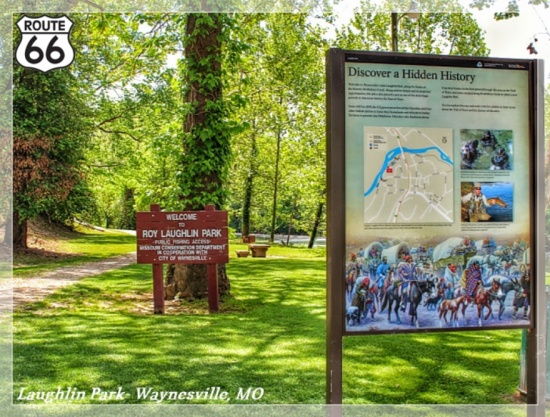