The name Wilson has been associated with a number of buildings in Utica, including multiple “Wilson Blocks.” Abel Wilson, his brother Jesse, and Peter Sperry founded the First National Bank of Utica in 1871. Abel Wilson would eventually become the sole owner of the bank as well as four large buildings in the village. The Wilson family residence still stands on North Main today. The Old Wilson Block was on the northwest corner of Main Street and Spring Street. It was destroyed in a large fire that devastated downtown Utica in December 1909. This surviving Wilson Block on South Main was built in 1910 in the wake of that devastating fire that destroyed the entire east side of Main Street. The new construction worked in tandem with the Wright Building next door to create a more cohesive street front on the north end of town. By May 1910, construction of the new Wilson Block was underway with three stories of brick and concrete, four planned rooms on the first floor with a barber and jeweler shop, seven rooms on the second floor, and a hall on the third floor. The four storefronts on the bottom floor have been home to a variety of businesses over the years. The Wilson Block was nearing completion at the time of Abel Wilson’s death in December 1910. At Wilson’s death, Miss Cora Clark, the National Bank of Utica’s head cashier, became the first woman president of a national bank in the United States.

Image 1: The Wilson Block and adjacent Wright Building shortly after their construction in the 1910s. Visible in this photograph, but no longer surviving, are the projecting bay windows, also called oriel windows

Image 2: One of the "Old Wilson Block" buildings at the northwestern corner of Spring Street and Main Street

Image 3: Barbers before their storefront at the Wilson Block on South Main Street in the 1910s 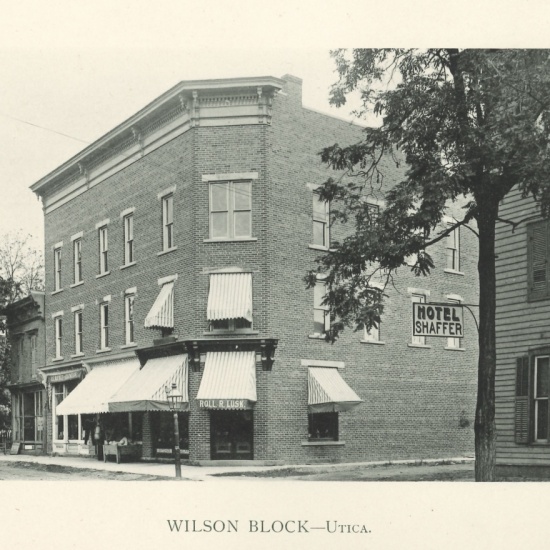 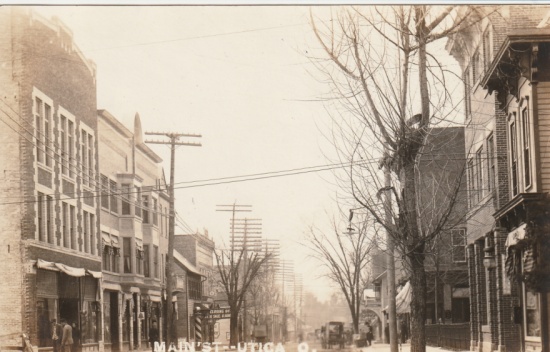