The traditionally whitewashed windmills characterize the Greek islands and mainly the Cyclades, working as symbols of local architecture. In Paros particularly, such windmills are found all around the island. Some are kept in the traditional form and are not used today, while others have been renovated and work as hotels, cafeterias or art galleries.

In the past, these windmills were of vital importance for the locals. Using the power of the wind, which is so strong in the Cyclades, people used to grain the wheat, the most important nutritional element at that time. Most windmills were constructed in the 19th century and fell in disuse after the mid 20th century when technological advancement and quick transport eliminated the need of them. A nice traditional windmill can be seen today at the port of Parikia, the busiest spot of the island.

Driving around the island will also bring you in front of many such windmills, particularly in the region of Naoussa, Marpissa, Lefkes, and Alyki, making them a very integral element of local architecture.

End the tour here and get ready to board your ferry! 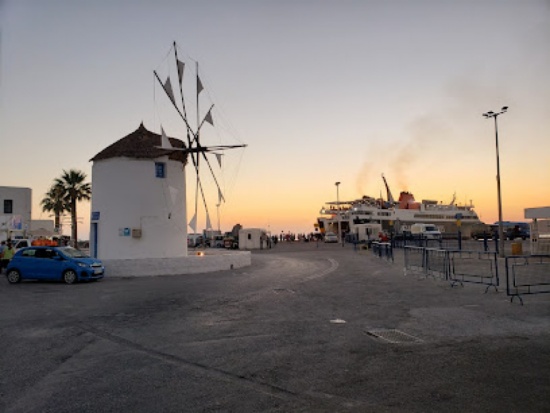