Tour of East side of LaGrange Historical District

The Village of La Grange was incorporated in 1879, just nine years after its founder, Franklin D. Cossitt, began his program of organizing a quality residential community. The success of his plan has continued to be a source of civic pride and has resulted in the enduring attractiveness and stability of the community. According to architect Wilbert R. Hasbrouck, “Village of La Grange Historic District as a well preserved suburban community with excellent examples of domestic architecture dating from the late 19th century to the early 20th century.” In his statement requesting that the La Grange Historic District be nominated to the National Register of Historic Places, architect Hasbrouck wrote:

“In its totality, the La Grange Historic District represents a period of architectural development of high artistic value and significance to the history of the region. Furthermore, the buildings have survived intact while continuing to be used for their original purpose.”

The La Grange Area Historical Society offers four different one-hour tours of this landmark area. Tour one, which extends from La Grange Road to east to Eighth Avenue, features four homes designed by Frank Lloyd Wright. All tours include commentary about the history and style of the buildings, which represent a variety of architectural styles and which were often designed by such notables as Frank Lloyd Wright, J. C. Llewellyn, E. H. Turnock, and J.N. Tilden.

In order to limit the length of each tour, the Society has highlighted only homes of the very highest degree of historical and architectural significance. However, the beauty of the Village lies in the overall quality of all of its residences. If you have an extra few minutes to devote to your tour, you might also want to study some of these other fine houses.

The residence identified as vernacular is not designed according to any specific rules and may be a product of several different styles. Nevertheless, it may be a fine example of form, scale, and materials.

429 South La Grange Road: is a fine example of the vernacular. It was built in about 1905 for Dr. Puffer. Notice the terra Cotta roof, which is rarely found in the Midwest.
2

425 South La Grange Road: is also vernacular because of the use of many elements from several architectural styles. This “castle” which would be unique anywhere, is ornamented by “towers” with battlements, leaded windows, and an unu... Read more
3

403 South La Grange Road: was designed by W.H. Drake for C.M. Babbitt in 1892. It is still often called the “Connell House” after the family of Jean Connell Linklater. Mrs. Linklater’s husband William, Village attorney for many years,... Read more
4

327 South La Grange Road: Was built in 1904 and is an example of vernacular architecture. Notice the ornamentation under the eaves and the pediments (often used in classical temples) over the dormers. Palladian windows are located in the up... Read more
5

321 South La Grange Road: was also designed by Llewellyn and was built in 1906 for John E. Windsor, who was Village president from 1909-1911. The House is largely vernacular, but you can see Colonial Revival elements such as the gracious fr... Read more
6

211 South La Grange Road: is an 1892 Victorian designed by Frank Lloyd Wright which was built for J. Irving Clark, a La Grange builder and contractor. It was among the first houses that Wright designed and is considered one of the best of h... Read more
8

First Congregational Church. We invite your attention to the west wing, the portion that includes the bell tower. A wooden church which had stood on the site gave way in 1892 to the west wing, which is the only remaining evidence of early c... Read more
9

308 S 6th Ave – This house was originally built on the northwest corner of Maple and LaGrange Road and was moved to its present location in 1889. This home is of the Folk Victorian style. The roof is a front gable type. The porch is a par... Read more
10

311 S 6th Ave – This Colonial Revival was built for $15,000 in 1908 by J.C. Llewelyn for E.K. Boisot, vice-president and manager of the First Trust and Savings Bank. The exterior facade is clapboard and the roof is a hipped with extended ... Read more
11

316 S 6th Ave – This house was built in 1908 by J.C. Llewelyn for Charles Vial, the grandson of Joseph Vial, and was a charter member of the LaGrange Area Historical Society. It is a Colonial Revival style with aluminum siding over clapbo... Read more
12

321 S 6th Ave – The style of this home is Spanish Eclectic The exterior is stucco and the roof is flat with pseudo front. The porch is an open terrace area. The Spanish Eclectic style uses decorative details borrowed from Spanish architec... Read more
13

324 South Sixth is an interpretation of Classic Revival by architect joseph Llewellyn in 1894. It has a symmetrical and orderly arrangement of door and windows and the pediment style gable. The suggestion of a Palladian window appears on th... Read more
14

338 South Sixth: was designed by J.N. Tilden for the James Kidston family in 1906. This vernacular house, which combines elements of the American Foursquare and Prairie Styles, has had only four owners. The Kidstons lived here for fifty yea... Read more
15

344 South Sixth,: the Lucius Yale House, was built in 1913 and was cited by the Illinois Historic Structures Survey for its architectural significance. It is a vernacular house that included elements of the American Prairie School. Notice t... Read more
16

345 South Seventh: is the home used in our illustration of the Prairie Style for this tour. It was designed by Frank Lloyd Wright as his Third Ladies Home Journal House, “A Fireproof House for $5,000,” in 1906. Wright executed the plan ... Read more
17

300 South Seventh: is architecturally interesting as an example of the Queen Anne style. The design incorporates many geometric shapes, natural bays, and specially blown glass in the turret windows. The wide porch, fishcale decoration, and ... Read more
18

212 S 7th Ave - This home was built in 1887 as a traditional Victorian home. In 1896 Otto Heppes, one of LaGrange’s leading citizens purchased the house. In 1913, Mr. Heppes had the house remodeled into the current English Tudor style. Th... Read more
19

124 South Seventh,: With its canopy over the door and its dormer and sunburst motif in the south side gable, is a fine example of Queen Anne style. George M. Vial built the house in about 1902 and lived in it until his death in 1915. The ex... Read more
20

116 South Seventh: was built in about 1890 by Franklin Cossitt for his son, F.D. Cossitt, Jr., Who was also prominent in the development of the Village as Director of the La Grange State Bank, Village trustee, and Village President from 190... Read more
21

111 South Seventh: was the residence of State Representative Farley and was built in about 1892. The Farleys’ son Charles was Postmaster of La Grange from 1953-1958 and was one of the organizers of the La Grange Citizens’ Council. Mr. F... Read more
22

108 South Eighth: is a vernacular home that closely resembles the American Foursquare. In 1894 Frank Lloyd Wright designed it for the original owner, Mr. Goan, who built the house as a gift for his bride. The house has wide overhangs, simpl... Read more
23

109 South Eighth: is a landmark because of its historical and architectural significance. R.G. Emmond commissioned Frank lloyd Wright to design it for him in 1892, and it is known to be one of Wright’s very first designs. Various geometri... Read more
24

203 S 8th Ave – This home was designed by John Tilton  in 1898 for Charles W Good.  Mr. Good was a special agent for the German American Insurance Company. This is a Colonial Revival influenced home with clapboard siding. The hipped roo... Read more
25

339 S 9th Ave – Illinois Masonic Orphans Home – (now Meadowbrook Manor) –The Illinois Grand Lodge selected a tract of land in LaGrange to be the location for their New Orphans Home. On March 15, 1911, seventy eight children from all o... Read more 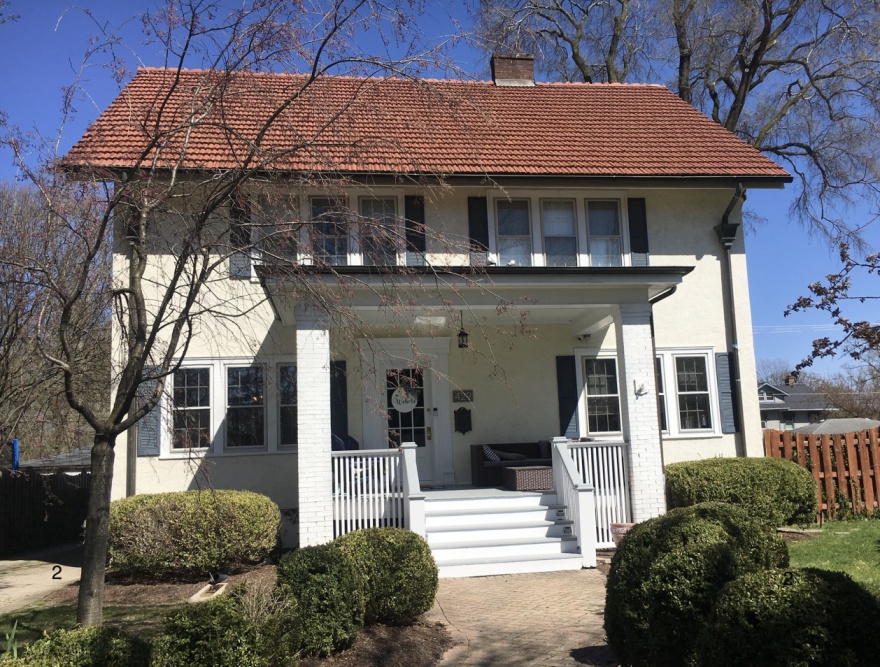 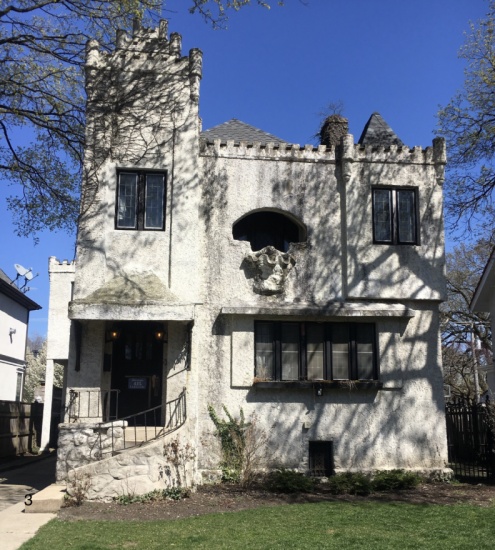 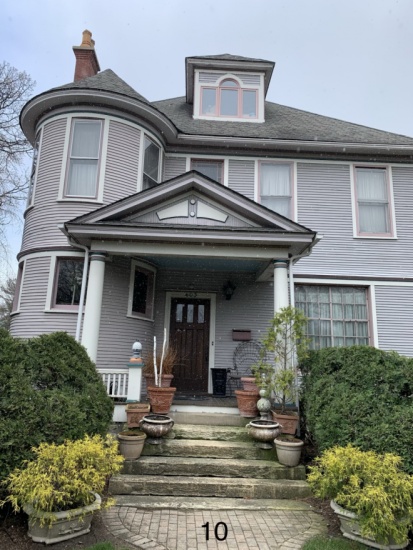 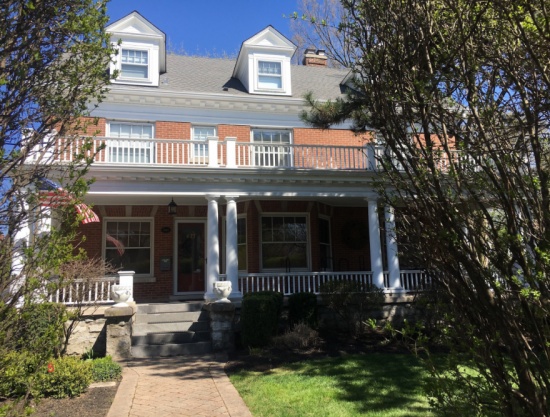 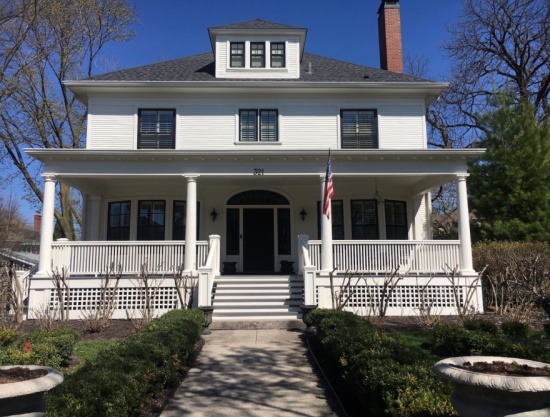 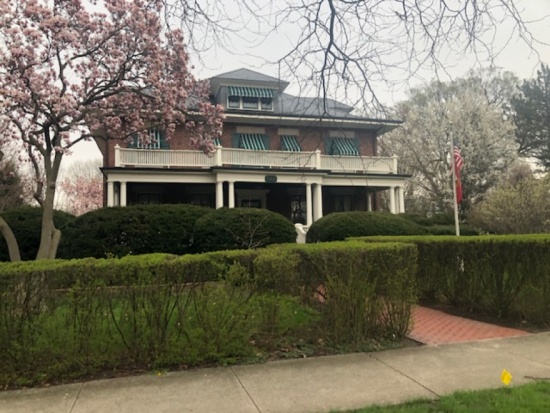 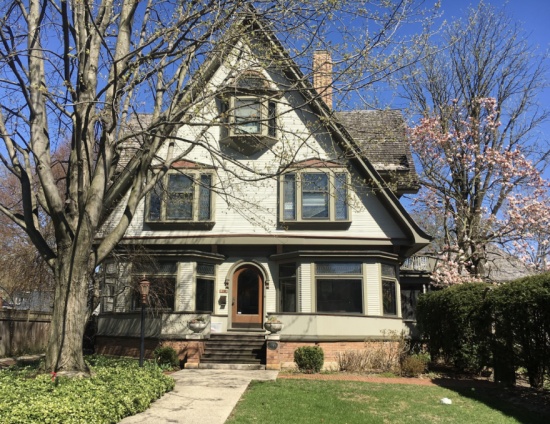 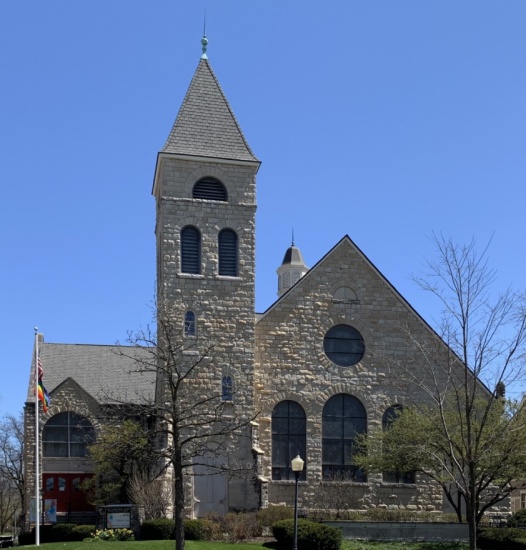 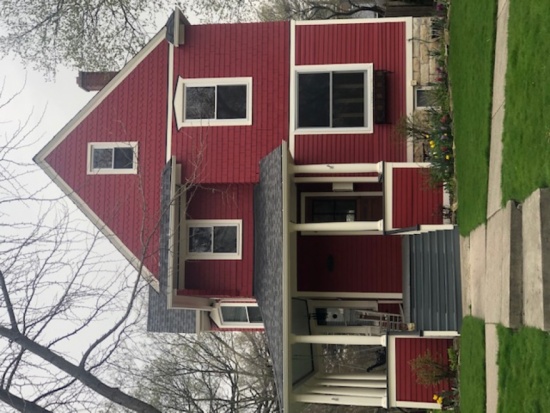 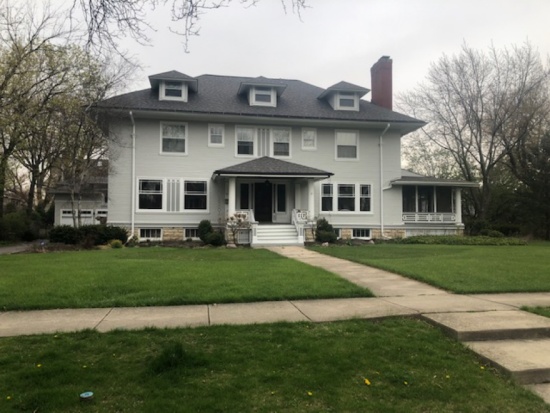 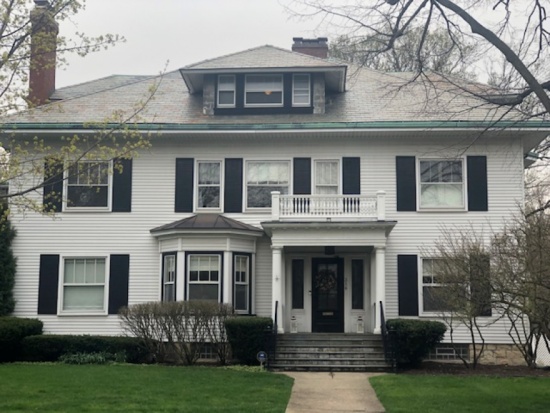 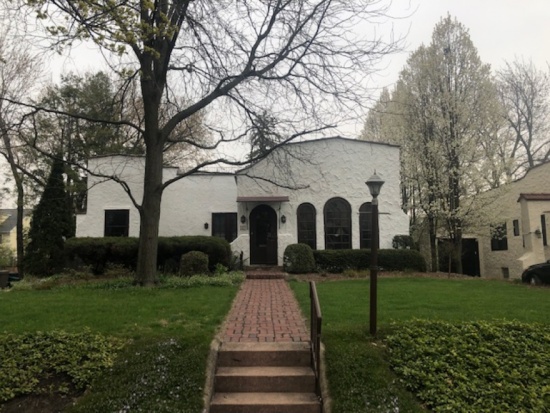 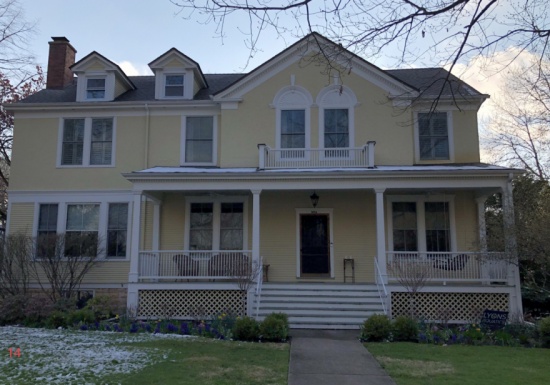 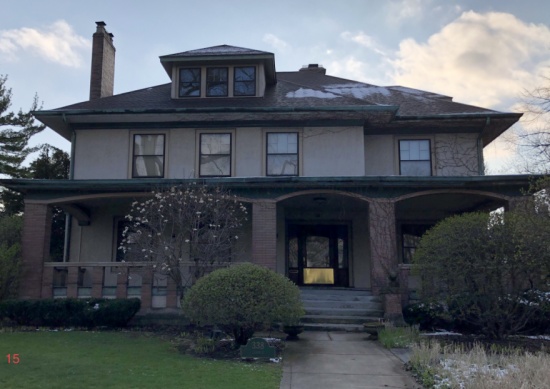 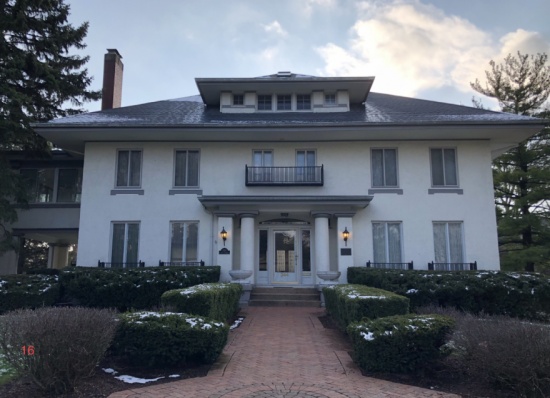 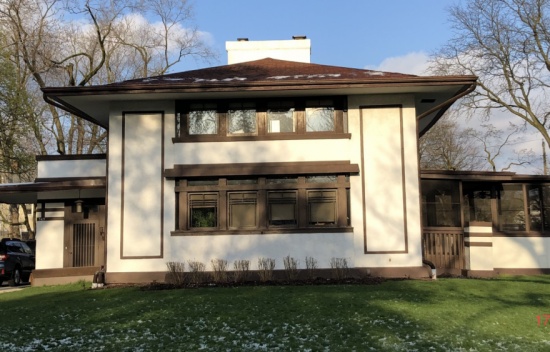 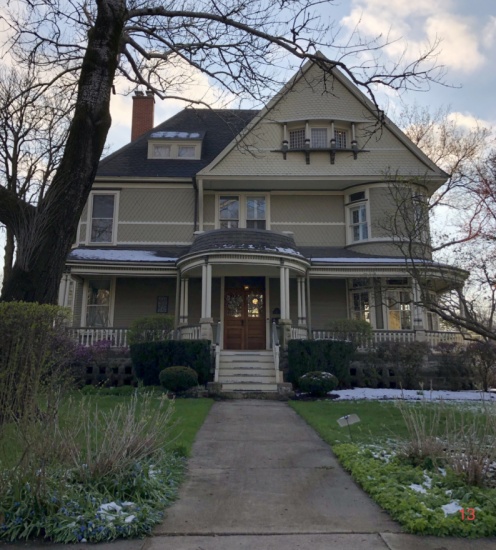 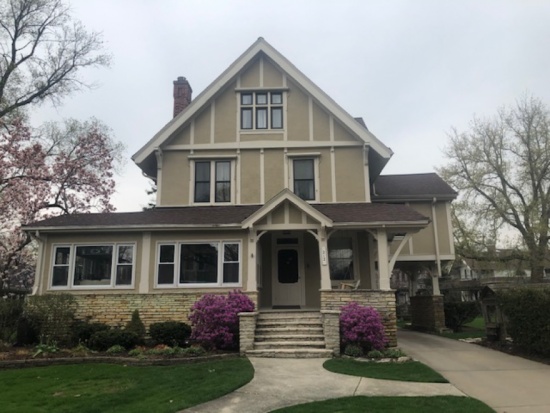 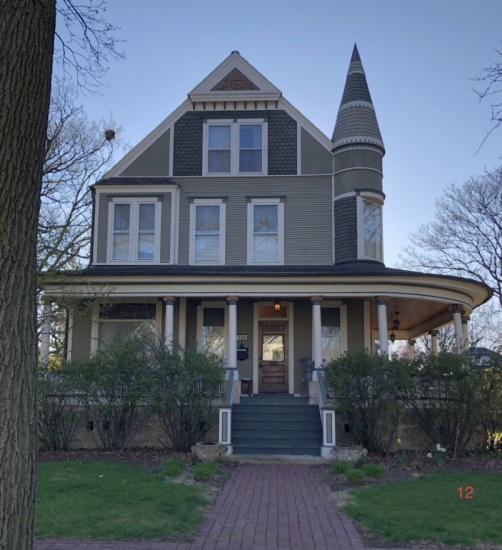 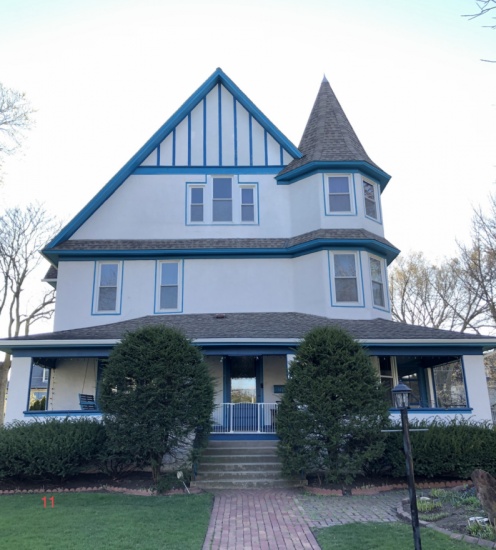 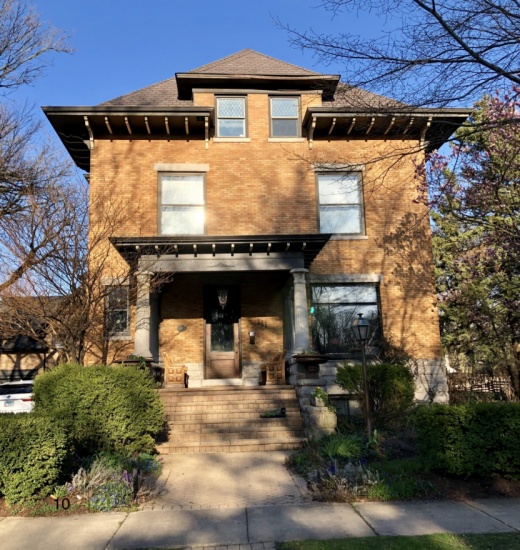 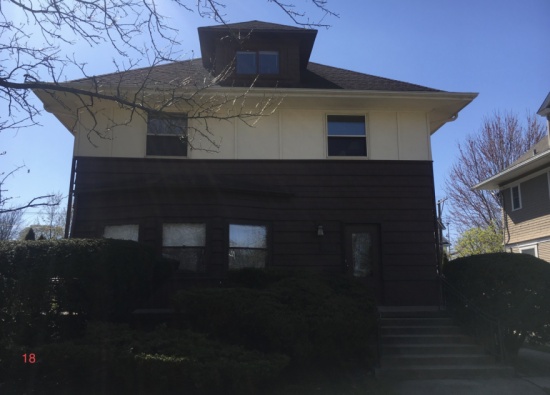 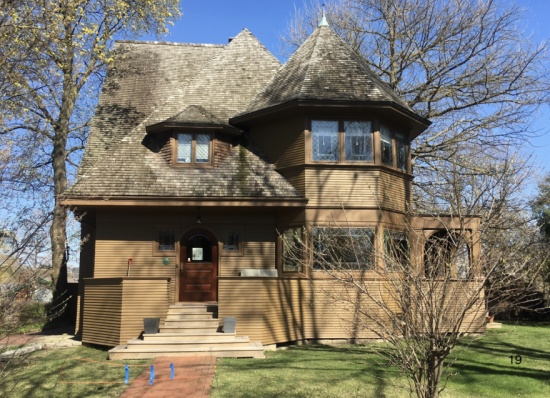 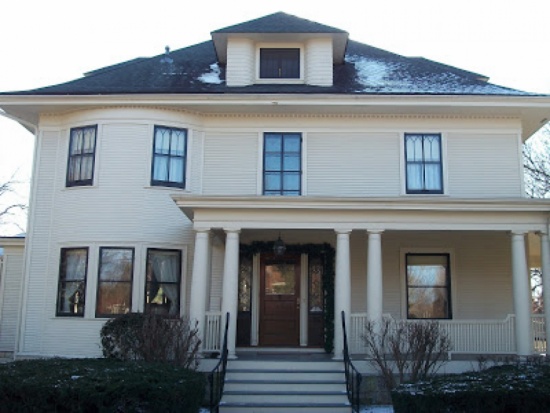 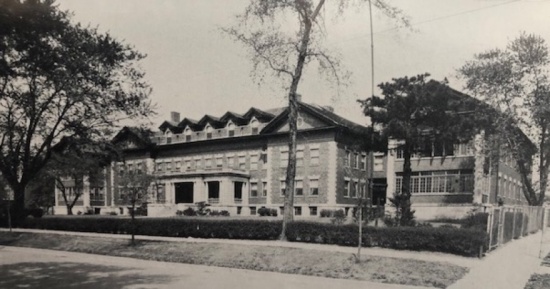