This tour was developed by Historic Ithaca Inc.

The Village of Trumansburg, settled in 1793, is a lively community on the western shore of Cayuga Lake. Prior to European settlement, this area had long been inhabited by the Cayuga Nation of the Haudenosaunee Confederacy. It was not until after the Revolutionary War that the first non-indigenous settlers arrived in the area. Abner Treman (1761-1823), the village's namesake, received an allotment of 600 acres as payment for his military service. He and his brother-in-law, John McLallen (1773-1844), brought their families here in 1793. Because of its productive mills and exceptional soil--and after the completion of the Ithaca-Geneva Turnpike (now NYS Route 96)--Trumansburg grew rapidly as a population center during the nineteenth century. Today, the village boasts a vibrant Main Street, an active music and arts scene, and a top-notch location in the heart of Finger Lakes wine country.

This wide-ranging tour features some of Trumansburg's noteworthy historic and architectural landmarks, including the homes of some of the village's earliest residents and several structures listed on the National Register of Historic Places. Each site highlights a unique aspect of Trumansburg's story. Join us on a tour through the village's vibrant landscape, where past meets present!

Please use discretion when approaching private property. Thank you, and we hope you enjoy the Village of Trumansburg Tour!

Welcome to Trumansburg! Our first stop is the First Presbyterian Church of Ulysses, located at 69 East Main Street. Trumansburg is home to one of the oldest Presbyterian congregations in Tompkins County, with regular services beginning as e... Read more
2

Located at 59 East Main Street is the former Trembley House Hotel. The Trembley House, named for Leroy Trembley (1830-1901), was constructed in 1871, just one month after a disastrous fire destroyed most of downtown Trumansburg. Trembley ch... Read more
3

Located at 47 and 49 East Main Street is the former site of the R.A. Moog Company, producer of musical instruments and the first electronic synthesizer. Numbers 47 and 49, which currently serve as a single unit, are two of five Italianate-s... Read more
4

Located at 5 McLallen Street is the Trumansburg Conservatory of Fine Arts. The Conservatory is one of the finest examples of high-style Greek Revival architecture in Tompkins County. The building was constructed in 1851 to serve as the Firs... Read more
5

Located at 6 McLallen Street is a modestly scaled Greek Revival-style structure. This building is remarkable both for its architecture and the disparate uses it has served. Number 6 McLallen Street was originally constructed as a lecture ro... Read more
6

The original owner of this Federal-style home, built in the 1810s, was Oliver Comstock. A doctor, Comstock went on to fill several important positions in village, county, and national affairs. Comstock served as a member of the House of Rep... Read more
8

This elegant red brick Federal-style residence was built circa 1835. It was constructed for the family of George Spink (1804-1877) and Martha L. Congdon Spink (1806-1885). George Spink was a merchant who was also involved with the founding ... Read more
9

Ithaca architect Clinton Vivian (1861-1930) designed this charming Colonial Revival home for the Isaac Holton family in 1905. A rounded, two-story bay capped with a gable with fish-scale shingles and an elliptical window under the eaves are... Read more
10

Located at 29 Washington Street is the Tower House. This L-shaped residence was constructed between 1856 and 1861, on land formerly associated with John McLallen’s farm. The design of the home embodies elements of the Gothic Revival style... Read more
11

Located at 34 Seneca Street is the William Austin House. This elegant Second Empire-style home was constructed in 1870 for William Austin (1832-1909) and his family. Austin served as a lieutenant colonel of the 109th Volunteer New York Volu... Read more
12

Of these joined buildings, 4 Washington Street is the older structure, built circa 1835. The transitional Federal/Greek Revival-style home was the residence of the John McLallen (1773-1844) family, tied by marriage to Abner Treman (1761-182... Read more
14

Built around 1820, this Federal-style home is one of the oldest structures in Trumansburg. It sits above Old Main Street, which was originally the Ithaca-Geneva Turnpike.  A two-story Italianate "high style" carriage house at the back of ... Read more
15

As many of New York’s villages and cities have grown over the course of the twentieth century, numerous main streets have lost their historic fabric. Such is not the case in Trumansburg. Numbers 1 through 23 West Main Street comprise a ch... Read more
16

Located at 16 Elm Street is the present site of the Juniper Hill Bed & Breakfast. Hermon Camp (1787-1878), one of Trumansburg’s earliest and most formidable businesspeople, was the original owner of a large tract of land of which Jun... Read more
17

This private residence is quite possibly the grandest building on our tour: the Hermon Camp House, located at 2 Camp Street. The Camp House, designed by Geneva architect Thomas Judd, was built between 1845 and 1848 for Hermon Camp. Camp wa... Read more
18

Originally built in the mid-1850s, this Federa-tyle home was transformed in the 1880s into an exuberant Gothic Revival mansion topped with a three-story tower. In the early twentieth century, a fire destroyed the tower; the entire house was... Read more
19

The Gothic Revival-style United Methodist Church was completed in 1857. The church has been maintained over the years, with major renovations in 1911 (addition of a raised floor for the main sanctuary space), 1959 (a basement was excavated ... Read more
20

Built in 1828, these double apartment buildings were originally warehouses. Notable owners included Abner Treman and Hermon Camp, and secret Masonic society meetings were held in #64 in the early 1800s.
21

The current Trumansburg Village Hall was originally the residence of the Henry D. Barto Sr. (1788-1857) family and built some time between 1820 and 1840. Henry D. Barto was a noted judge, lawyer, and banker. The Barto home was built in the... Read more 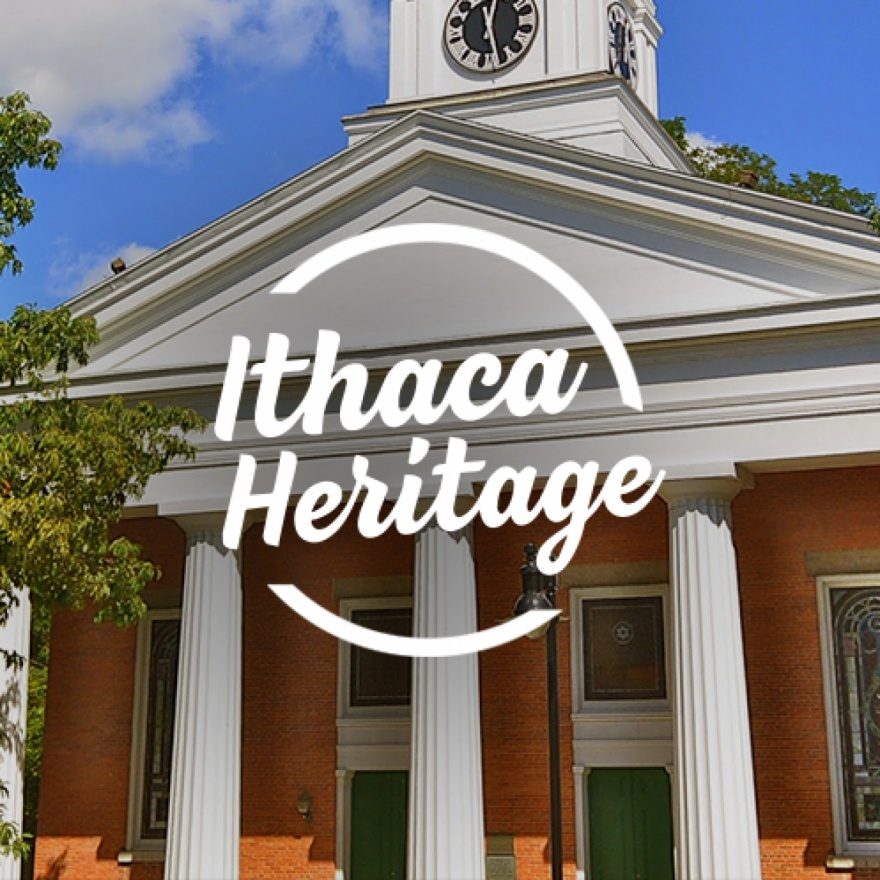 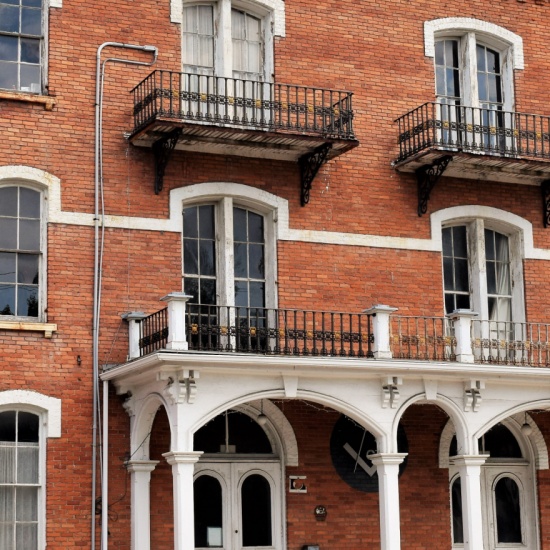 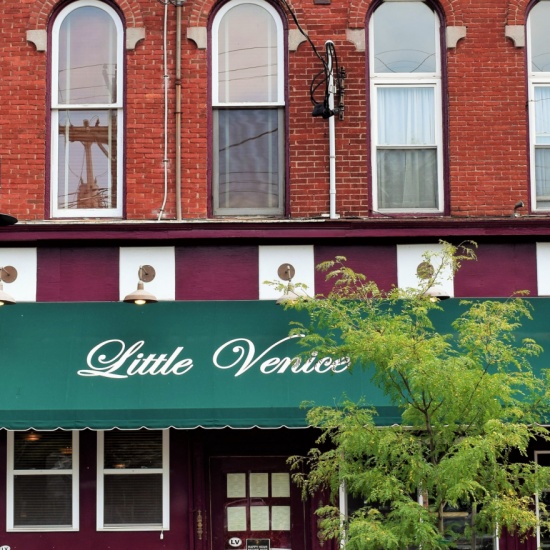 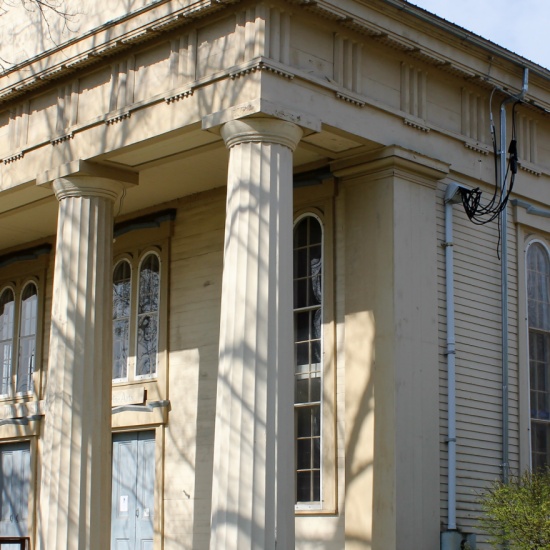 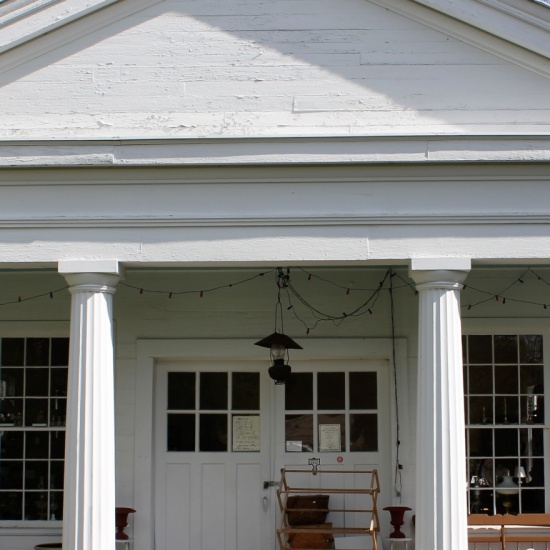 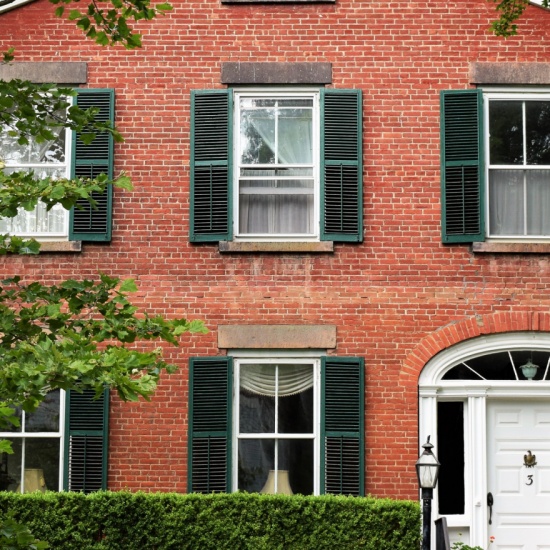 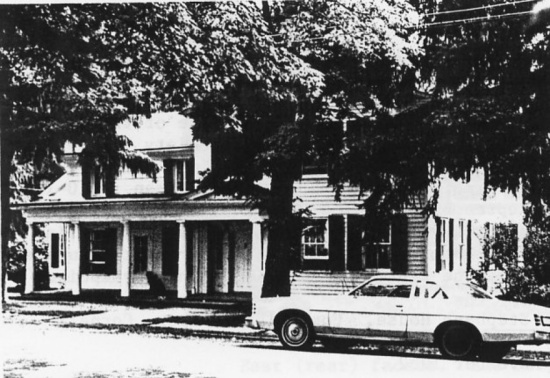 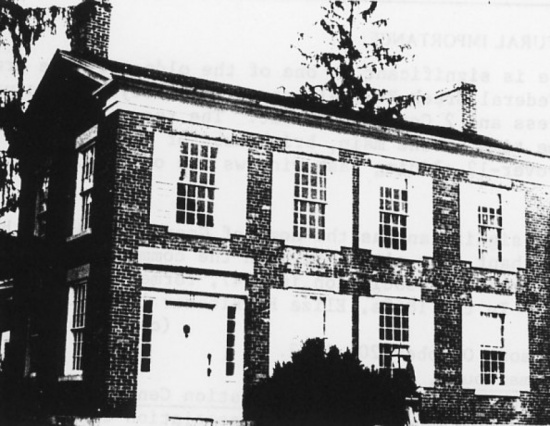 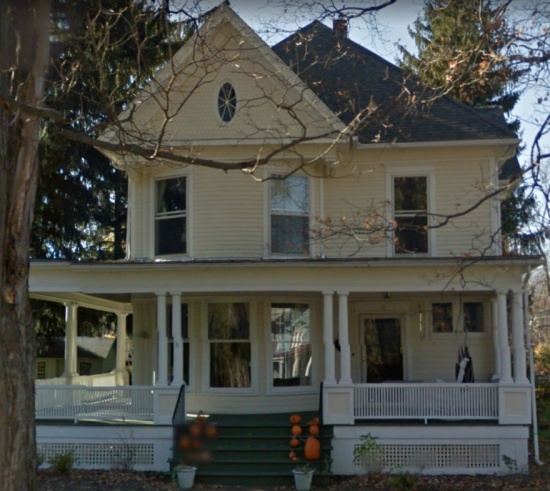 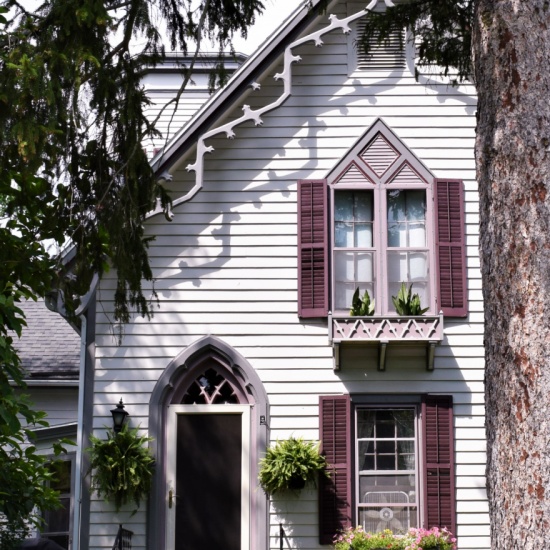 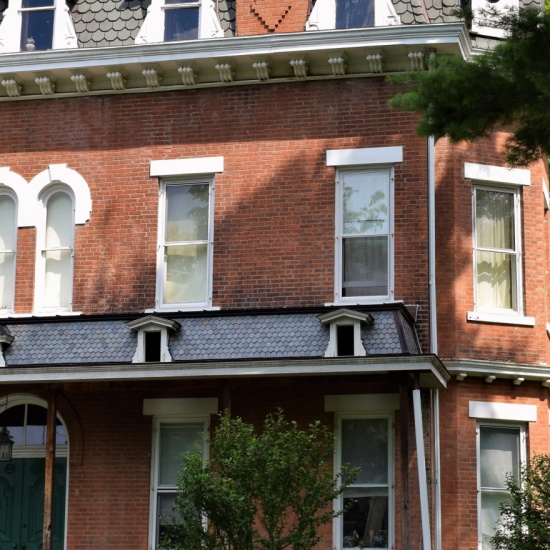 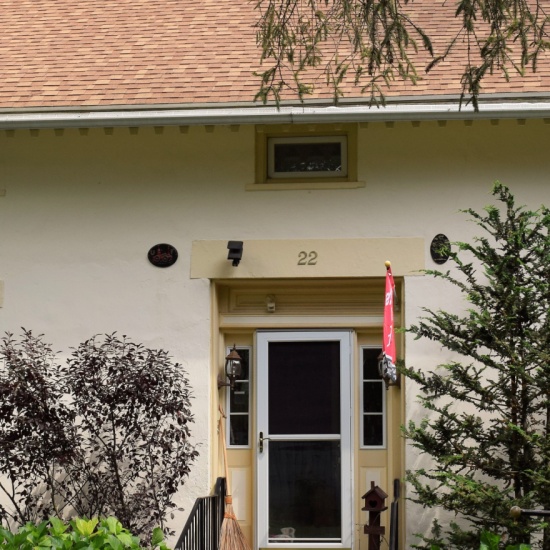 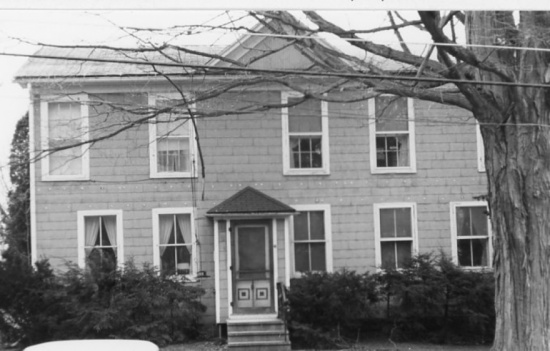 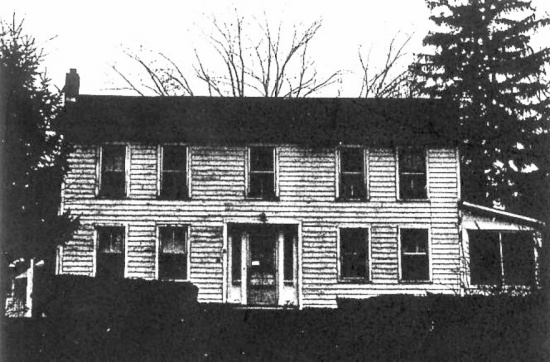 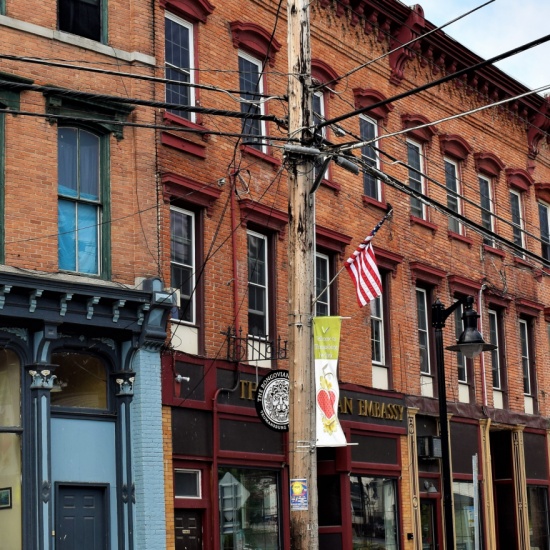 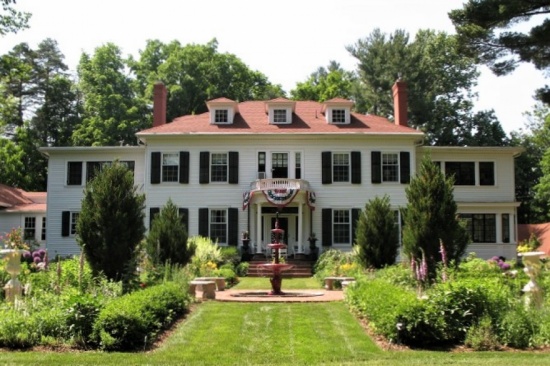 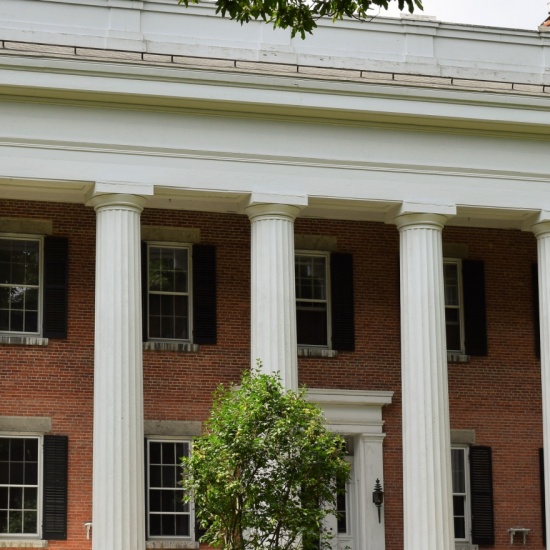 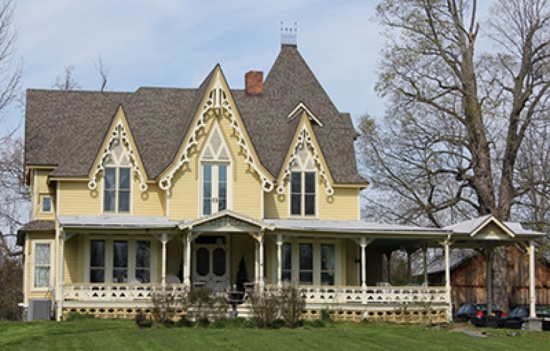 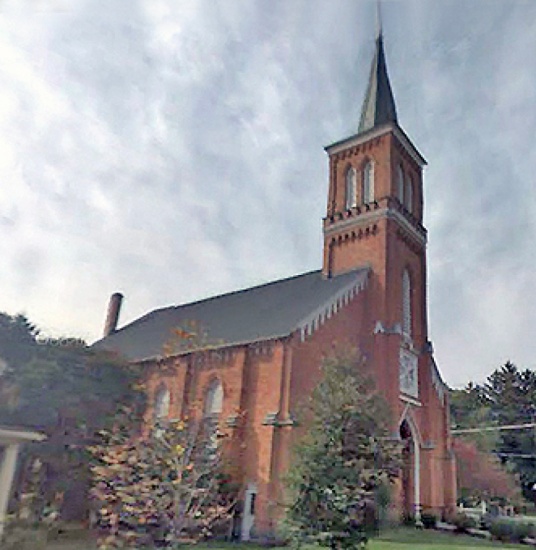 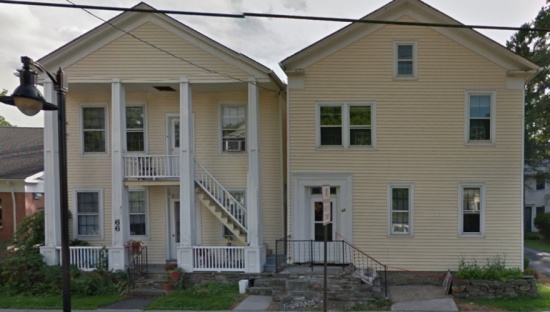 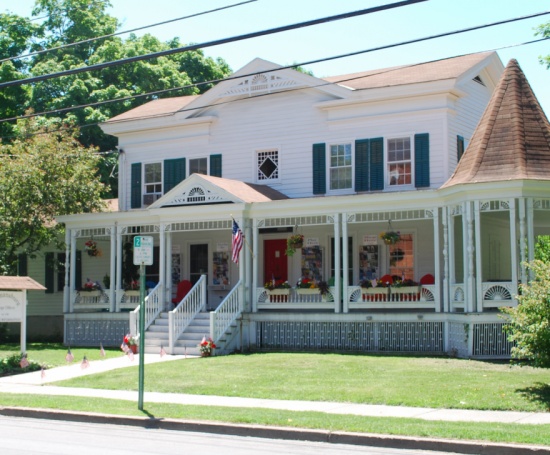