Enjoy as we take you through one of Winston-Salem's most historically rich neighborhoods, Belview.

Although the Waughtown area to the east of what is today known as the Belview neighborhood dates to around 1800, this section of the combined Waughtown-Belview National Register Historic District was not platted until 1891, and was more an outgrowth of recent development in the nearby Sunnyside and Washington Park neighborhoods. (These adjacent southeast Winston-Salem historic districts have traditionally been known collectively as “Southside.”) Waughtown developed mostly along the Plank Road (now Waughtown Street), slowly moving outward onto side streets as the century progressed. But in 1890, the Winston-Salem Electric Railroad opened: running down Main Street, turning onto Cascade Avenue in what is today the Washington Park neighborhood, then returning back over Main and up to Sprague Street in today’s Sunnyside/Central Terrace historic district.

Just three months later, the Winston-Salem Land & Investment Company was incorporated by fourteen investors that included Henry Elias Fries, Adolphus H. Eller and Henry Bahnson. (Each would eventually build a significant home in Washington Park.) The company quickly hired Civil Engineer Jacob Lott Ludlow to design a planned development that included much of today’s Washington Park and Sunnyside neighborhoods, although the plat was not registered until early 1892. Concurrent with the incorporation of several other development companies and expansion of the streetcar system (by now reconstituted as the Winston-Salem Railway and Electric Company) was the construction of the Roanoke and Southern Railroad, completed by 1892. It ran along the western edge of Waughtown, separating it from the new Sunnyside development, but spurring industrial growth in both neighborhoods.

[Ludlow came to Winston-Salem from his native New Jersey in 1886 and started a general civil engineering practice in municipal, sanitary and hydraulic problems. Over time, he helped design water supply and sewerage systems throughout the South. From 1889 to 1892 he served as Winston's first city engineer, and appears to have been instrumental in initiating a sewerage system and street-paving program. He received his Masters degree in civil engineering from Fayette College in Pennsylvania in 1890 while working for Winston. In that same year he was asked to draw the plan for the West End suburb, and concurrently or shortly thereafter, drew the plan for what is today Washington Park and immediately east, Sunnyside. They were developed on land that was originally part of the Good Spring Estate, and later, the Sunny Side Plantation as well.

The West End plan more closely adheres to the teachings of Frederick Law Olmsted, with a large hotel on a hill (the lost Zinzendorf Hotel) and residential lots along curvilinear streets, interspersed with small parks. The curvilinear pattern used there was a major departure from the grid patterns of Winston and Salem. Ludlow's plan for Washington Park, however, contained the more customary grid pattern in the center moving west into curvilinear streets which heeded the topography of the ridge overlooking the floodplain of Salem Creek.]

This fortuitous combination of economic factors prompted the creation of the Wachovia Development Company in 1891, whose investors included Henry E. Fries (again); Salem postmaster Robert William Belo; F. M. Simmons, president of the Winston-Salem Land & Investment Company; and Jacob L. Ludlow himself. It appears few lots were sold by the actual company, but rather individually by company investors.

For example, Belo began selling lots in the Wachovia Development in 1891. Some of the earliest lots he sold were located along Sprague Street, the route of the streetcar line, although lots on Monmouth and Devonshire streets were also sold in the first year. Belo sold a number of lots each year through about 1908 with most sales for one or two lots to individuals, both African American and White. These early houses in Belview are for the most part vernacular or modest popular-style architecture.

One early purchaser was Lewis Hege, an African American who bought a lot on Morsinie Street in 1908. By 1910, Hege appears in the City Directory as a laborer living in Bellview (the name was sometimes spelled with two l’s as well) indicating that he may have built a house on this lot. There were also a few people who purchased large numbers of lots from Belo. The most prolific was George Crowder, a blacksmith at the Spach Brothers Wagon Works, who bought numerous lots between about 1900 and 1905.

Many of the lots sold to African Americans during the late nineteenth and early twentieth centuries were located in the area of Aureole, Moravia, and Morsinie Streets. This southern part of the Wachovia Development plat became known as Belview, an English adaptation of the French belle vue or "beautiful view," and with time, most of the area within the Wachovia plat came to be called by that same name.

It appears that Belview was well developed by 1910, when it was first listed in the City Directory as a "suburban settlement southwest of Southside.” The Wachovia Development, or Belview, became a place where both whites and blacks lived together in the early 1900s and this pattern extended into the 1940s and early 1950s. The southern part of the community, however, did become a center for African American life with an orphanage, school, and black-owned businesses developing from the early 1900s through the 1920s near the site of the 1913 Waughtown Baptist Church at 828 Moravia Street. (Because there were separate black and white Waughtown Baptist Churches, the black congregation chose to rename itself as First Waughtown Baptist Church in 1989.)

Similarly, the northern section of the Wachovia Development plat was primarily occupied by white residents by the 1910s. The extant houses in the 600- 800 blocks of Devonshire Street offer an excellent picture of the occupations of these white residents in 1915. Residing here were several transportation employees including a hostler for Southern Railway, a conductor at street railway, and two car repairmen for the street railway along with a clerk at the Frank C. Brown Company, two chair makers, a traveling salesman, an employee of Arista Mills, a clerk at the Smokers Den, a shipping clerk at Southside Roller Mill, a foreman at Winston Vehicle Company, three carpenters, a contractor, a painter, and a farmer.

By 1915, Waughtown and the Belview/Wachovia Development neighborhood had become closely linked as residential development filled the gap between them. These two areas were also increasingly tied to the industrialization and economic prosperity of the burgeoning city of Winston-Salem. While wagon making and the building trades continued to be the dominant occupations in Waughtown throughout the 1900s and 1910s, the first fifteen years of the twentieth century brought about significant growth and change in Winston and its sister town of Salem through the tobacco and textile industries.

Because most local histories spend far more time on the Waughtown neighborhood than the Belview area, we will now turn to the history of First Waughtown Baptist Church for greater detail on itself, the Old and New Belview schools, the now demolished Belview Cemetery, and the Belview Colored Orphanage. (We are deeply indebted to historian Spencer McCall Jr. who drew on numerous individuals, staff of the North Carolina Room of the Forsyth County Public Library, and the North Carolina Baptist Archives at Wake Forest University in writing his history of First Waughtown Baptist Church,

Although listed as being “officially” organized in 1900, black Baptist and Methodist congregations began worshiping in the Waughtown area as early as the 1820s. Shortly after the Civil War, newly emancipated John and Mary Linebach Fries... Read more
2

This row of mid-century modernist structures were likely built by the same contractor. Similar designs can be found scattered throughout county neighborhoods, often in a small group like these. This particular grouping includes the ranchett... Read more
4

A one-story frame front-gabled Craftsman bungalow that features a hipped-roof porch supported by paired square posts on a stepped balustrade. The house sits on a rusticated concrete block foundation and is clad in vinyl. 1930 CD: C. D. Carr... Read more
5

A one-story side-gabled Craftsman Bungalow. The jerkinhead-roof porch is supported by battered columns on brick piers with what was an unusual eight-over-one front window in 2004, now lost. False beams and knee braces feature in the side ga... Read more
6

The description for this house was written while using Google Maps, which we use to double check house styles when not onsite. The house described below is still on Google Maps (2012), so it was a disappointment to discover in person… tha... Read more
7

A one-story tri-gable cottage with a hipped-roof porch supported by turned posts and sawn brackets. The structure is clad in asbestos shingle siding with exposed purlins and a diamond attic vent in the side gables. 1930 CD: (911) J. Frank a... Read more
8

1007, 1009, and 1010 Goldfloss Street are all Pyramidal Cottages from 1910-1915, yet have been altered in very different ways. A half- to full-width porch was common. A pyramidal roof is simply an equilateral hipped roof: some with a center... Read more
10

A one-story brick Modernist Ranch that features classic Ranch details of deep, overhanging eaves along with picture and horizontal windows. The 2004 owner stated the house originally had a flat roof and was built for the Sink family who liv... Read more
11

A one-and-a-half side-gable structure with cedar shake cladding that features a shed-roof dormer; a steep-pitched front gable; and a picture window with sidelights. A front-gable addition with side entrance and facade chimney is attached. 1... Read more
17

In 2004, when the National Register nomination was written, this lot contained an early I-House with Queen Anne details. Sadly, the lot is recently vacant. The house is still visible on Google Maps. (TWO 1900 I-Houses lost just since 2004.)... Read more
19

A one-and-a-half story Period Cottage with vinyl siding and painted brick. It features a steeply-pitched front-gable projection that includes a tapered facade chimney and diamond-light casement windows along a side porch. 1940 CD: not liste... Read more
20

A one-story side-gable with rear ell house fronted by a three-quarters porch with metal awning supported by metal posts, topped by a projecting gable. The cottage windows have a small decorative six-light upper over a large single light. 19... Read more
22

A one-story front-gable Craftsman Bungalow with a front-gable projection that features knee braces in each gable. There is also a large side-gable wing. The recessed porch included a shingled balustrade and post at the time of the nominatio... Read more
23

A one-and-a half-story Minimal Traditional with Tudor elements. There is little to no eave overhang and minimal detailing outside the steeply pitched projecting front-gable and the brick facade chimney and entryway. Aluminum cladding. ... 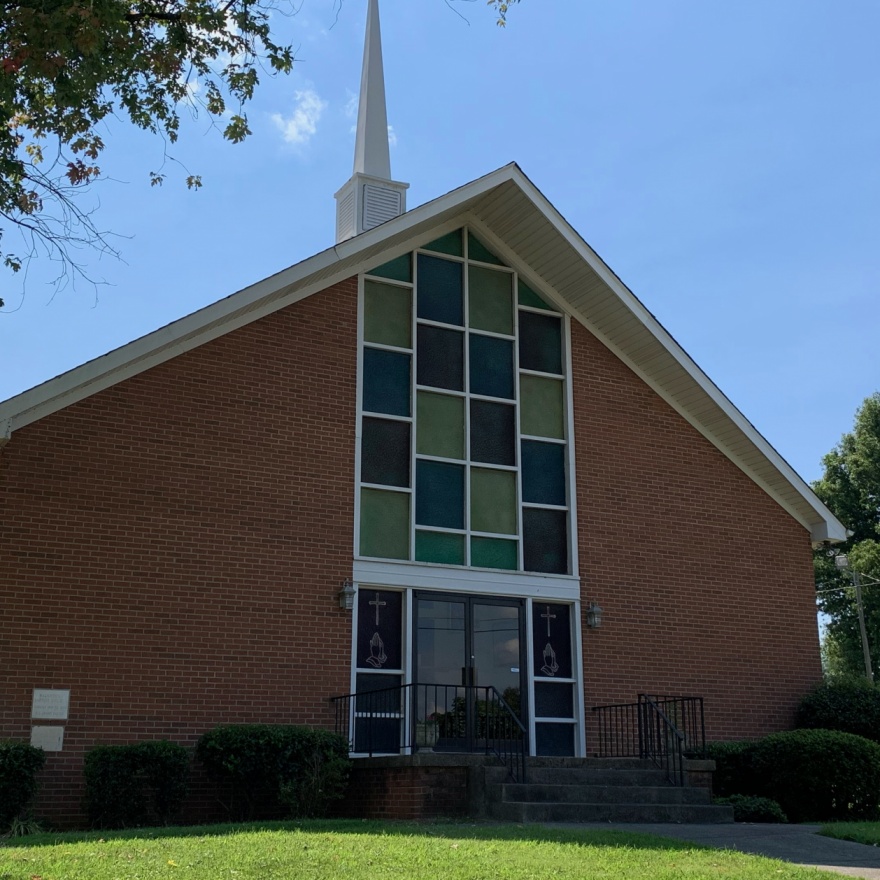 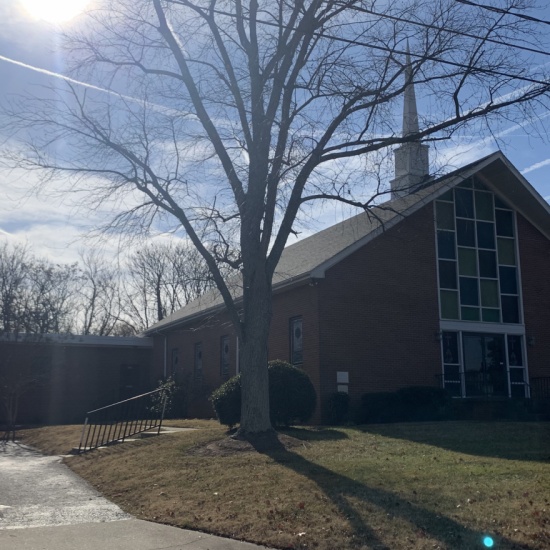 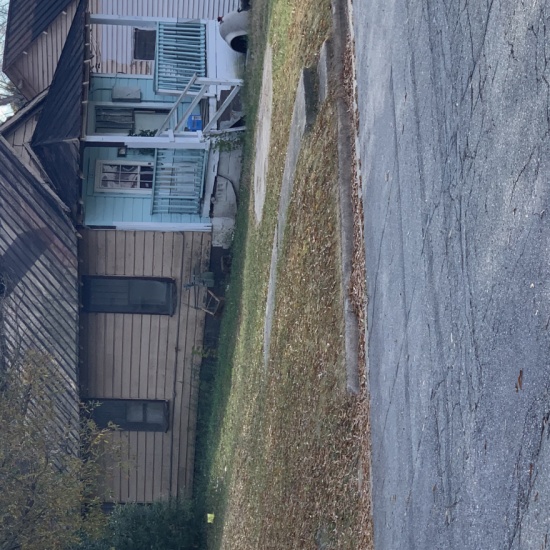 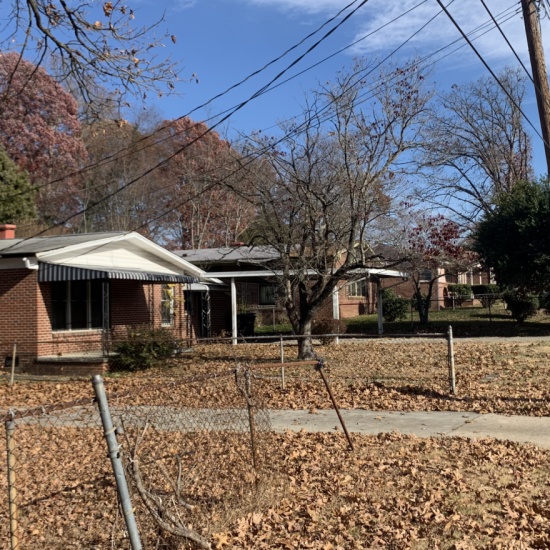 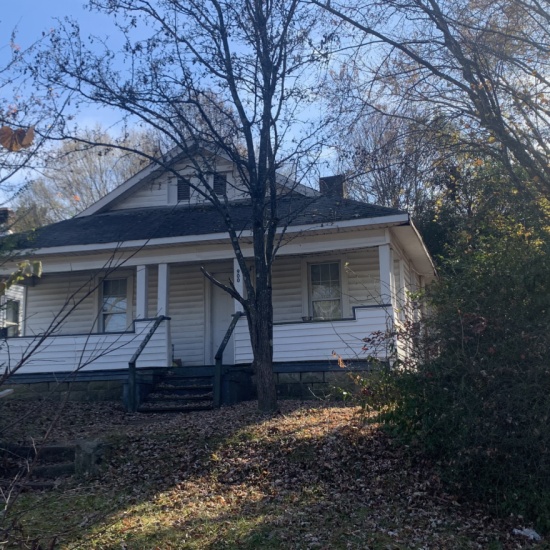 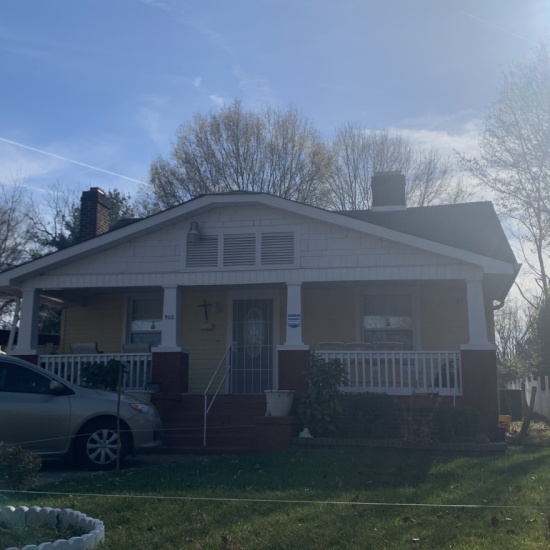 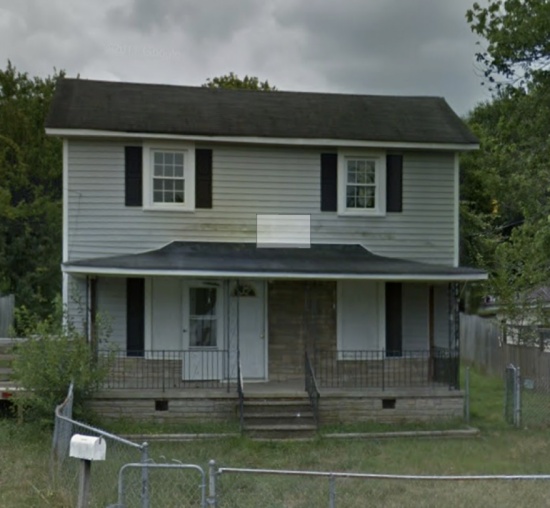 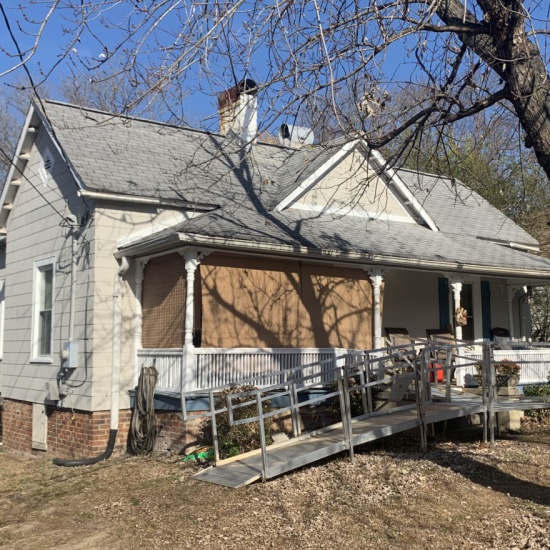 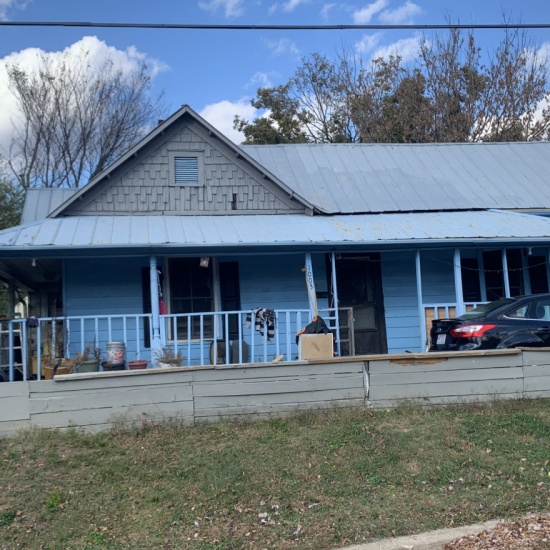 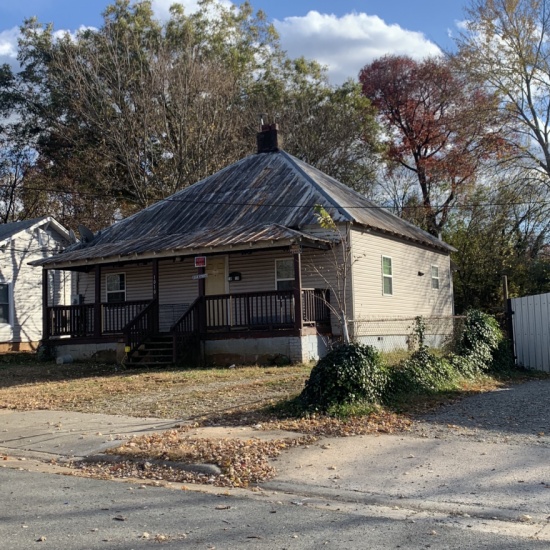 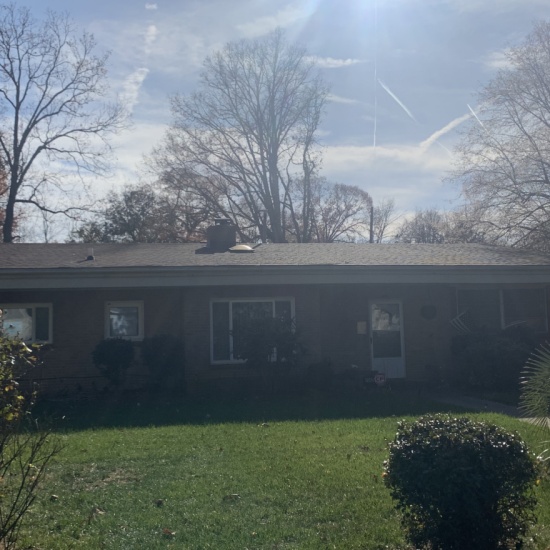 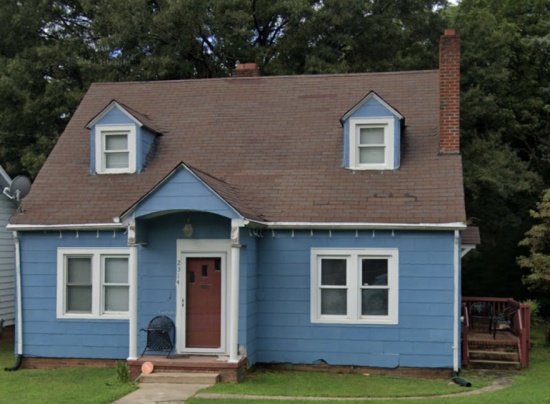 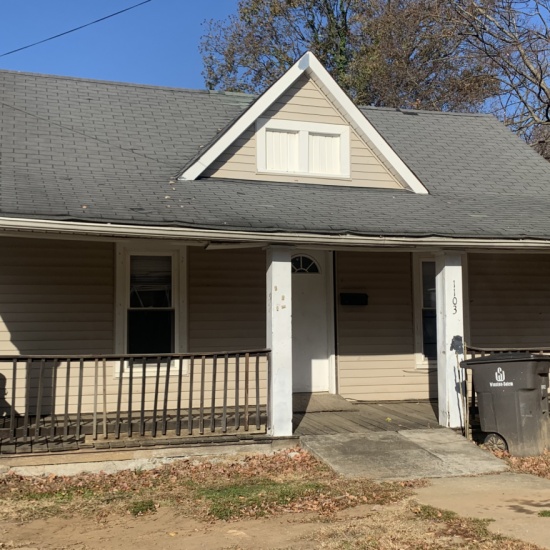 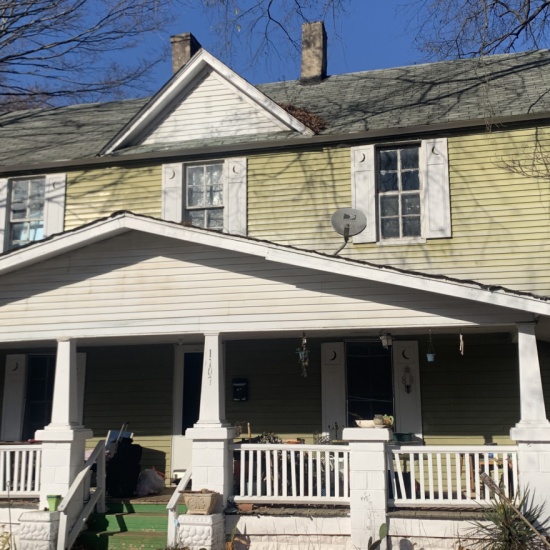 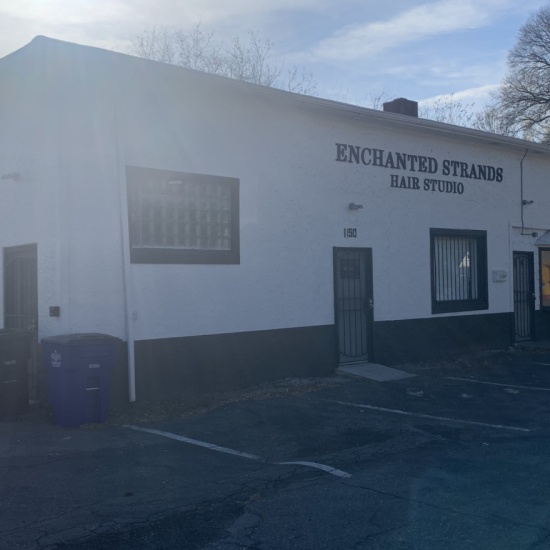 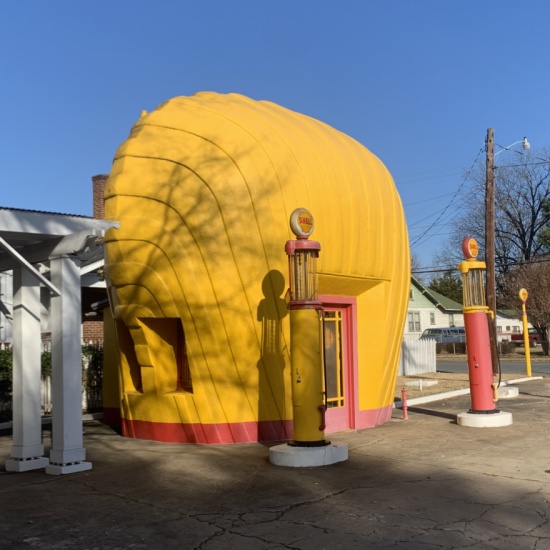 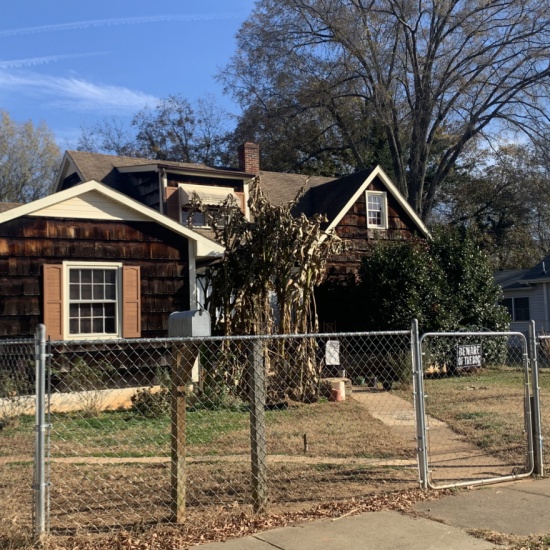 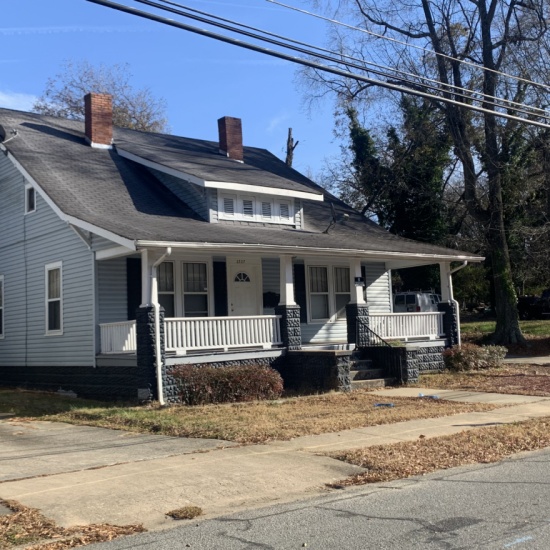 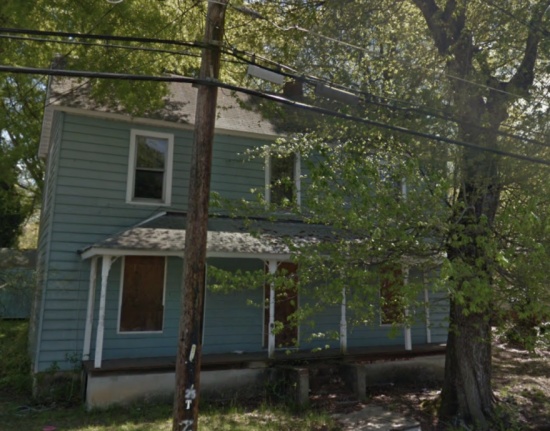 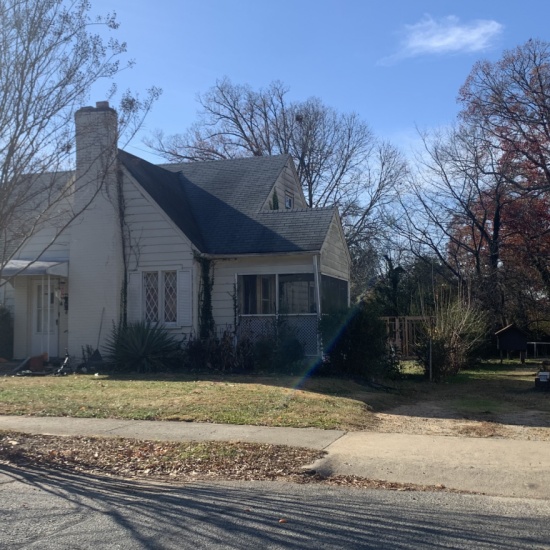 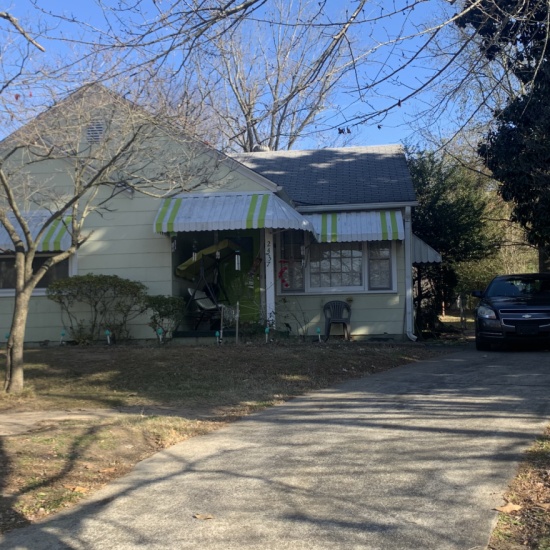 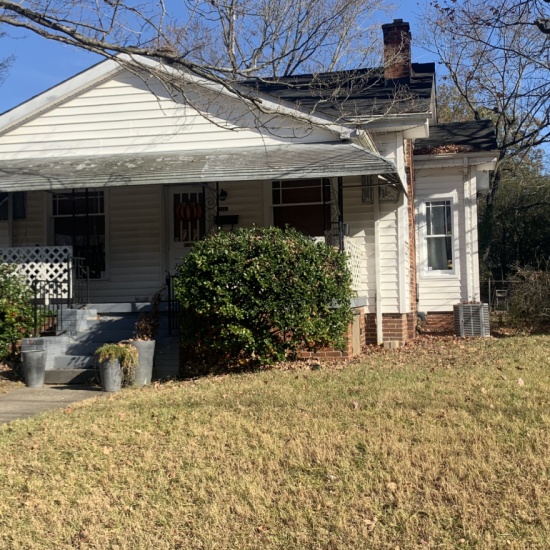 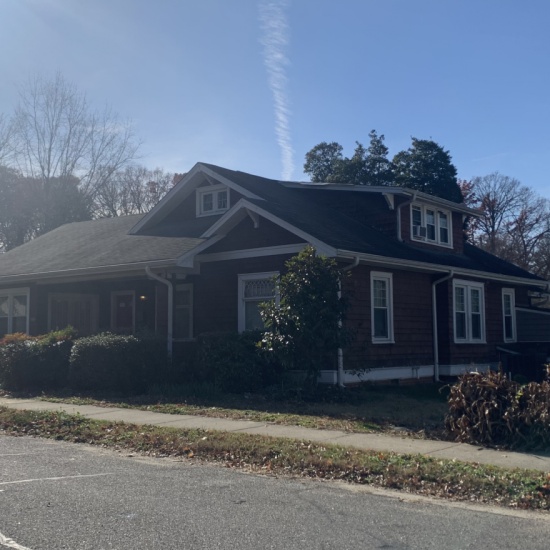 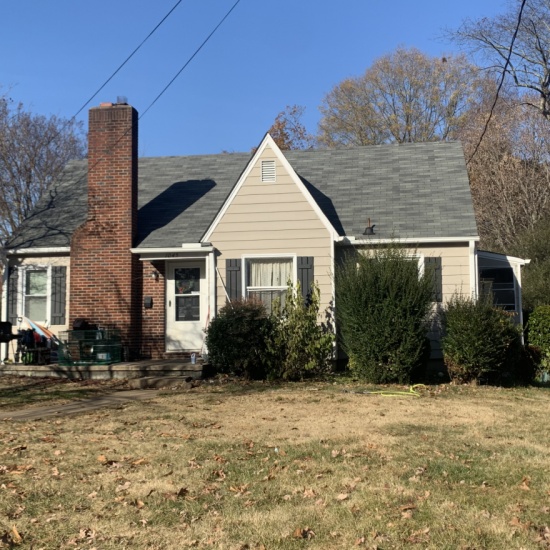