In 1791, George Washington traveled north from Salisbury to Salem through what would become, over a century later, a planned suburb and a dedicated greenspace aptly named Washington Park. Once a hilly hunting ground for the Moravian settlers of Salem, Washington Park is now a quiet, tree-shaded neighborhood with broad lawns and a wide variety of architectural styles. It is significant in the history of Winston-Salem as one of the early residential suburbs developed as a result of the streetcar, reflecting the city's evolution from a small business center to one of the leading manufacturing centers of the South, and contains the residences of many of Winston and Salem's most prominent leaders from that period.

Located on steep lands at the crest of a ridge overlooking Salem Creek to the north, the Washington Park neighborhood was approximately one-half mile south of the early Moravian community of Salem (1766) and one and one-half miles south of the central business district of Winston (1849). Initially consisting of a limited number of rural farmhouses on large tracts and uninhabited wooded land on the steep hills, the neighborhood was eventually subdivided into smaller parcels, with multi-acre parcels assembled by the wealthy.

In 1870 Winston was still a small town with a village atmosphere, having been established a little over twenty years earlier in 1849. Its population was 473, but just ten years later its population had multiplied to 2,854 and then almost quadrupled by 1890. This rapid growth was driven partly by the establishment of the railroad, but also by the optimism of energetic entrepreneurs who built early factories and warehouses. Winston's boom gained speed in the 1880s when the burgeoning tobacco and textile industries spawned numerous new residential areas. The first suburb, West End, was developed in the 1890s, quickly becoming the neighborhood of choice for prominent families. The plan for its development was designed by Jacob Lott Ludlow who also drew the Washington Park/Sunny Side neighborhood plat.

[Ludlow came to Winston-Salem from his native New Jersey in 1886 and started a general civil engineering practice in municipal, sanitary and hydraulic problems. Over time, he helped design water supply and sewerage systems throughout the South. From 1889 to 1892 he served as Winston's first city engineer, and appears to have been instrumental in initiating a sewerage system and street-paving program. He received his Masters degree in civil engineering from Fayette College in Pennsylvania in 1890 while working for Winston. In that same year he was asked to draw the plan for the West End suburb, and concurrently or shortly thereafter, drew the plan for what is today Washington Park and immediately east, Sunnyside. They were developed on land that was originally part of the Good Spring Estate, and later, the Sunny Side Plantation.

The West End plan more closely adhered to the teachings of Frederick Law Olmsted, with a large hotel on a hill (the lost Zinzendorf Hotel) and residential lots along curvilinear streets, interspersed with small parks. The curvilinear pattern used there was a major departure from the grid patterns of Winston and Salem. Ludlow's plan for Washington Park, however, contained the more customary grid pattern in the center moving west into curvilinear streets which heeded the topography of the ridge overlooking the floodplain of Salem Creek.]

Ludlow's plat gave no name to the area, but was titled "Plat of the property of the Winston-Salem Land & Investment Company (WSL&I) situated at Winston-Salem, NC, as developed by J. L. Ludlow C.E., Winston, NC." It is generally accepted that Washington Park was named in honor of President George Washington, who passed through the area on his way to Salem on May 31, 1791. His route from the south brought him along Old Lexington Road, today's Rawson Street within the Washington Park historic district.

The neighborhood and others nearby, however, were as a group simply called Southside for many years, apparently from the area’s earliest development. City directories used 'Southside' or 'S'Side' to identify the location of streets in Washington Park, Sunnyside, and elsewhere in the city's southern sector. The Sanborn Map Company's index maps of 1895 and 1900 provide no name for the neighborhood, but show the area with 'Winston-Salem Land & Inv. Co.' written across it. Real estate auctions in 1911 also advertised the area as Southside.

And the park itself has not always been called Washington Park, in fact, Ludlow's plan shows the name "Sunny Side Park" in the ravine. (Adalaide Fries notes in her history of the county that the name Sunny Side was derived from a plantation owned by Elias A. Vogler, sited where today’s Sunnyside neighborhood exists.) Over several decades, the name of the park morphed from Sunny Side to Washington Park to Southside Park, finally swinging back around to Washington Park. That was solidified in 1928 when the Daughters of the American Revolution (DAR) presented the stone gateway at the foot of Gloria Avenue with the name Washington Park in an iron arch above.

Like the West End neighborhood, the development of Washington Park followed Ludlow's plat with remarkable loyalty. A comparison of Ludlow's plat with the map on the title page to the 1895 Sanborn Insurance Maps shows few differences. By 1912 Wachovia Creek had been renamed Salem Creek. By 1917 the neighborhood was sufficiently developed to warrant inclusion of parts of eighteen blocks in detailed enlargements showing the residential development which had taken place in the area. (It’s important to note that the original plat included what is today both the Sunnyside historic district to the east with its rectangular grid pattern and the Washington Park historic district which incorporates a grid pattern along with the curvilinear streets surrounding the v-shaped park.)

Harold Macklin was a popular local architect who lived first on Gloria, then in a bungalow at 330 Vintage Avenue, although no buildings in the district have been identified as Macklin designs. J. T. Levesque, office manager for architect C.

Gilbert Humphreys (Southside Baptist Church), lived at 180 Park Boulevard. Like Macklin, Humphreys was born in England. He designed some of the grand houses for Winston-Salem's wealthy in the Stratford Road and West End areas, and it is possible that some of Cascade Avenue's large houses are his work as well. Finally, William F. Miller's son, William E. Miller, was an architect too. "Big Will" was a vice-president of Fogle Brothers Lumber Company; "Little Will" and his father built several houses together on Park Boulevard.

This corner has always been a commercial area in the neighborhood. Originally, a frame store owned by C. D. Couch housed Southside Grocery on the first floor with a private school run by Mrs. Poindexter above it. Maurice M. Brame bought the... Read more
2

A brick-veneer flat-roofed commercial building with large plate-glass display windows. When Conrad Stonestreet was preparing to expand his drugstore at 301 Acadia Avenue, he and cousin Ashley Stonestreet agreed that the latter would move to... Read more
3

A filling station with a glass-walled office and two automotive bays, set back to allow space for cars in the paved lot. Conrad Stonestreet bought this lot at auction and demolished the house, planning to  build a drugstore here. Instead, ... Read more
4

A flat-roof brick-veneer Art Deco commercial building with large display windows in the facade, a 9-section transom above them, and soldier course lintel. On the north and west elevations, which face Acadia Avenue and Hollyrood Street, is a... Read more
5

A brick gable-roofed Gothic Revival style church with a three-stage crenelated entrance tower on the diagonal at the corner and parapet gables with crenelation on the gable sides. The tower features a belfry with tall louvered vents and spa... Read more
7

A frame weatherboarded Queen Anne style house that features a hipped roof with a gable-roofed front wing at the north end. It is three bays wide and one room deep with a two-story rear gable ell and three interior chimneys. The front projec... Read more
8

This large frame Queen Anne style house sits on a prominent tree-shaded hilltop facing Freeman Street. It features classical details, decorative use of shingles between levels, and is an interesting example of an early version of German-typ... Read more
9

In 1892, the Winston-Salem Land & Investment Company dedicated a 17 acre tract originally mapped as “Sunny Side Park” for use as a public recreational area. The original v-shaped area flanked a creek that ran through the development... Read more
12

A weatherboarded gambrel-roofed frame house with a large shed dormer in the front. The front first story features four grouped nine-over-nine windows and a small engaged shed hood over the recessed entrance porch. There is a one-story sunro... Read more
13

A side-gabled Craftsman bungalow with a central shed dormer; a front-width porch supported by square posts on brick piers with cast stone caps; and a picket balustrade with heavy newel and railing. The structure has an unadorned central ent... Read more
14

A hipped-roof frame foursquare house with a full-facade hipped porch supported by square posts on shingled piers with a shingled balustrade, The facade features three asymmetrical bays on the first floor with two bays of paired windows on t... Read more 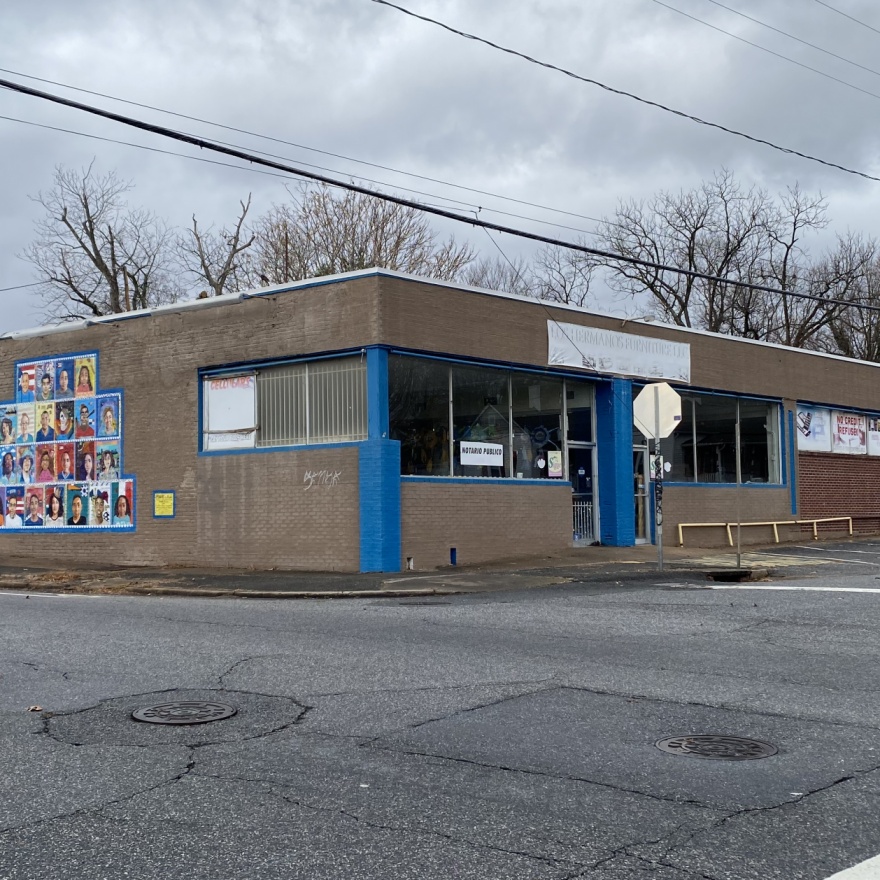 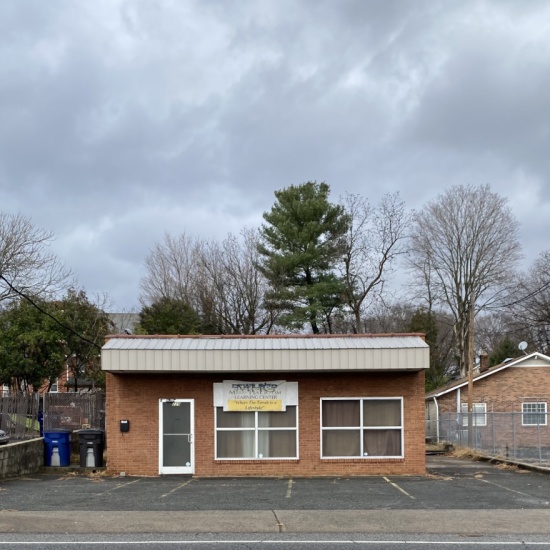 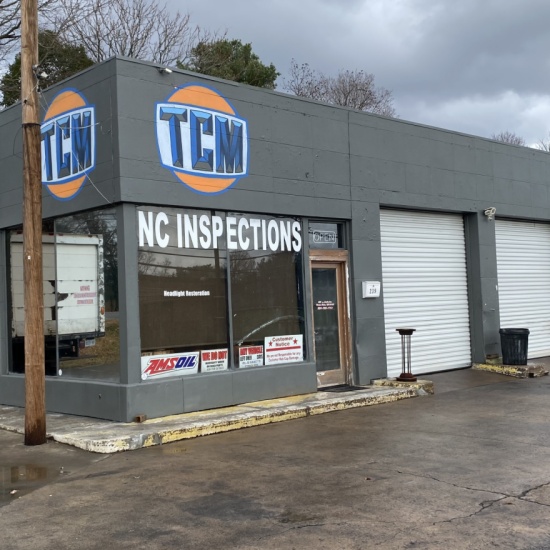 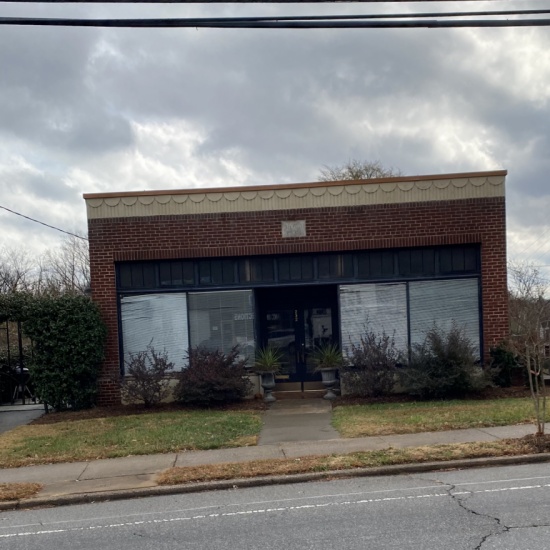 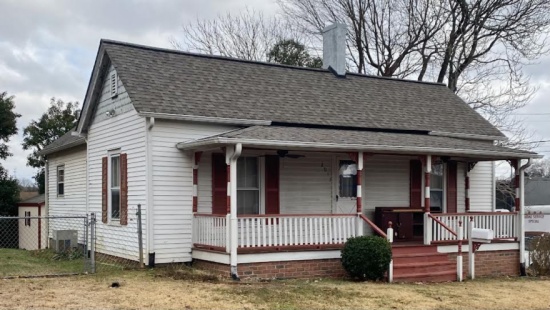 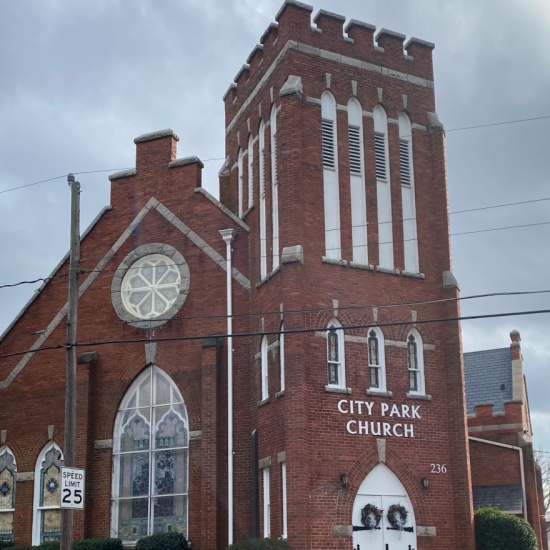 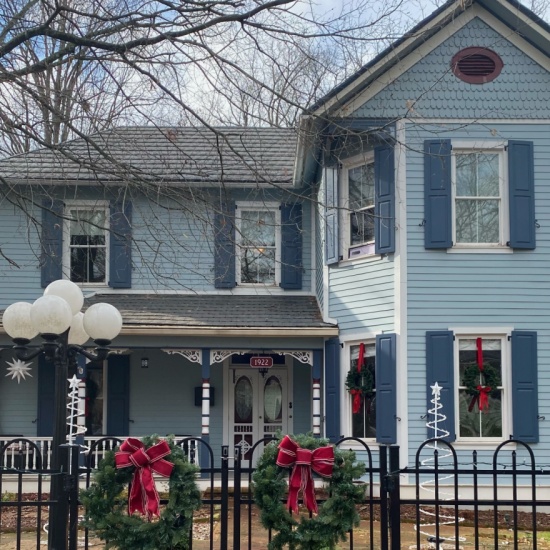 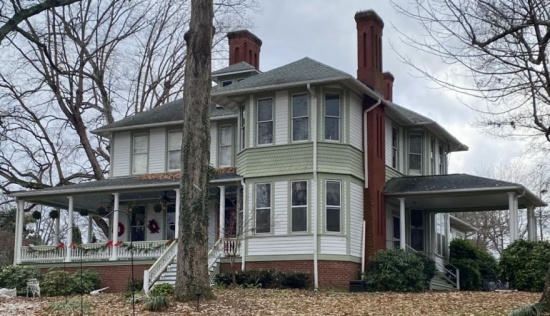 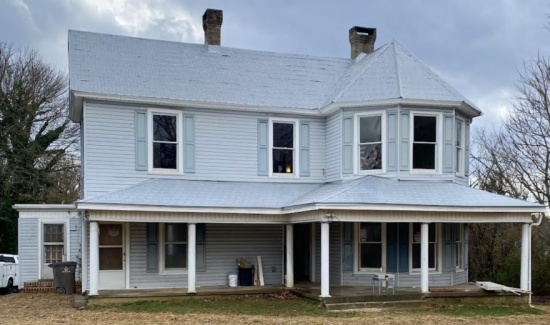 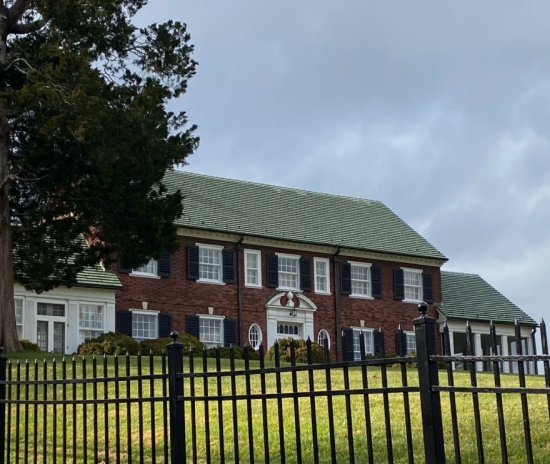 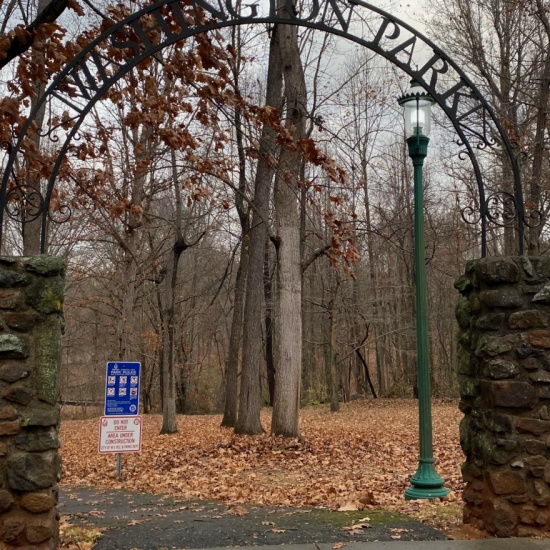 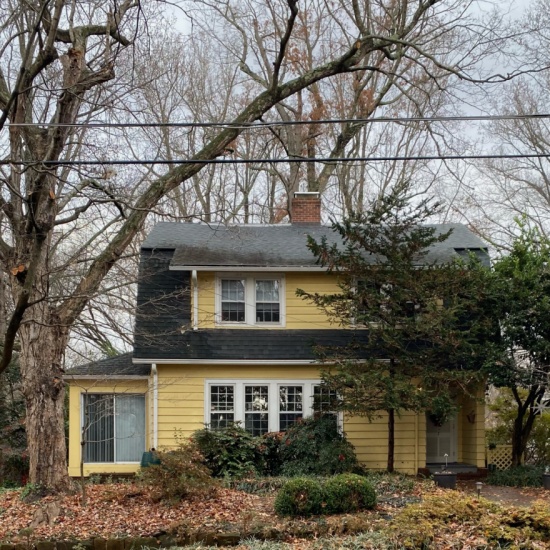 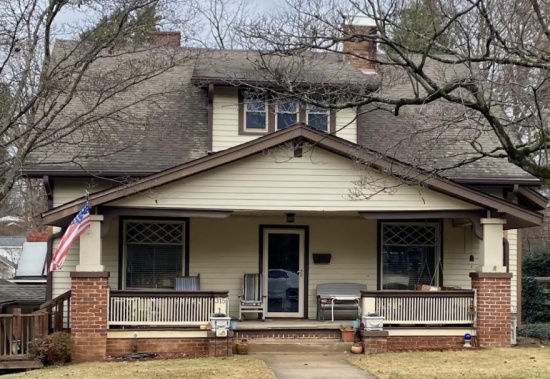 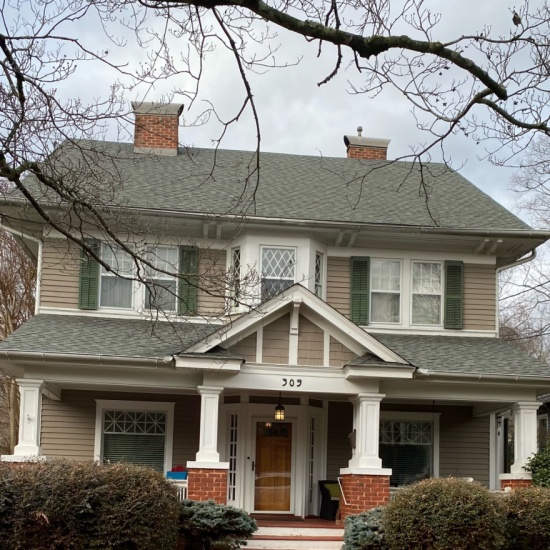 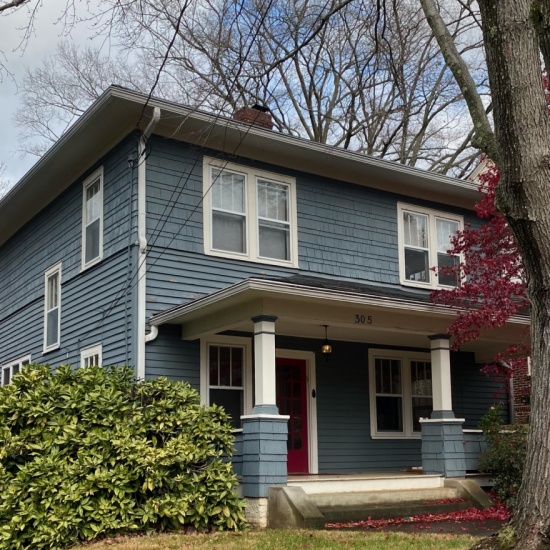