This tour was developed by Historic Ithaca Inc.

DeWitt Park has been the heart of Ithaca's religious, educational, and governmental activities from the community's earliest days and is one of the oldest residential neighborhoods in the city. It received both local and National Register Historic District designations in 1971. The district contains a wealth of architectural styles, reflecting the work of some of Ithaca's most distinguished architects.

The land on which Ithaca is situated belonged originally to the Cayuga Indians. The Cayuga, like the other Five Nations of the Haudenosaunee Confederacy, were forced off traditional lands in New York State during General John Sullivan's campaign of 1779. In 1789, the former Cayuga lands were ceded to the American government, subdivided, and awarded as payment to soldiers of the Revolutionary War. The first settlement in the area was near present-day DeWitt Park. Most early land use was residential, occurring to the east, west, and north of the park. The commercial district was conentrated to the south, serving traffic along State Street, which connected to the Owego and Catskill turnpikes.

Simeon DeWitt, after whom the park and district are named, was appointed surveyor general of New York in 1784 and later created the plan for Ithaca. The grid of streets surrounding the park today appears on a map drawn by DeWitt in 1806.

DeWitt Park has been the principal open space in downtown Ithaca through most of the city's history. Buildings face on the square rather than away from it, much like the traditional New England commons. In 1826, DeWitt confined new construction to the northern part of the park. The southern section was to be "at all times kept as a public walk and promenade, . . . that no houses or other buildings, except ornamental improvements, be erected . . . thereon, and that no dead bodies be interred therein." In 1827, additional legislation made it illegal to drive oxen or cattle on any part of the square other than the gravel walks.

Please use discretion when approaching private property. Thank you, and we hope you enjoy the DeWitt Park Historic District Walking Tour!

In 1817, Simeon DeWitt donated this land for a county courthouse. The current structure, the second on the site, was built in 1854. Union Springs architect John F. Maurice designed it in the Gothic Revival style, popular then for domestic a... Read more
2

The current church is the third on the site. The first was built in 1831. The present church dates to 1890, when the congregation outgrew its mid-century Gothic Revival building. Matching a $12,000 pledge from John D. Rockefeller, the chur... Read more
3

A Presbyterian society was founded in Ithaca in 1804. Members met first in a school where DeWitt Mall is now located, and in 1818 a wood-frame meeting house was dedicated on the present site. The second building was a Gothic Revival structu... Read more
4

This marker commemorates the Oregon Mission of 1834, dispatched by the Presbyterian church under the leadership of Reverend Samuel Parker to bring "the white man's book from heaven" to the Nez Perce Indians of Oregon. Two women missionaries... Read more
5

This marker honors Robert MacDowell and Jonathan Woodworth, who built their cabins near this site, as the earliest settlers in Ithaca. Some historians, however, maintain that Peter Hinepaw, Jacob Yaple, and Isaac Dumond, who erected log cab... Read more
6

This former residence is one of the oldest still standing in Ithaca. It was built in 1820 by Jeremiah Beebe, a prominent banker and one of three partners who built the Clinton House at 120 N. Cayuga Street. In 1850 the house was sold to Wil... Read more
7

Roger B. Williams, president of the First National Bank, engaged Ithaca architect Clinton L. Vivian to build his home in 1906. Although it could be labeled Colonial Revival, the architectural style is also referred to as American Renaissanc... Read more
8

This residence reflects the transition from Federal to Greek Revival with the later addition of a Colonial Revival porch. The five-bay rectangular main body, gabled central pavilion, and two-story pilasters all date from the original ca. 18... Read more
9

Built around 1875, this brick house is an example of the Italianate style prevalent in the mid- to late 1800s. Characteristic details include a wide overhanging cornice with modillions, tall, thin windows, prominent sills with curved brick ... Read more
11

This early residence (building records indicate 1828, but the cornerstone shows 1825) is another variant of the Federal style. Note the delicate detailing in the fanlight over the door. The two-story portico with Ionic columns, however, ref... Read more
12

Originally located at 113 W. State Street, where the State Theater now stands, this building was built ca. 1820 by local carpenter Luther Gere as both a residence and a bank. It housed Ithaca's first bank, a branch of the Bank of Newburgh,... Read more
13

Built in 1832 or 1833 on property purchased from Simeon DeWitt, this residence incorporates both Federal and Greek Revival details. The stepped gable is common to Federal structures in row-house situations, where it served as a fire stop b... Read more
14

Designed by Eli Goldstein of Buffalo, Temple Beth­-El was constructed in 1928. Though the first Jewish residents probably arrived in Ithaca in the 1850s, the first congregation was formed in 1906. The temple derives its form from Islamic a... Read more
15

The current Tompkins County Courthouse was built in 1932 in a neo-Georgian style popularized by restoration work in Williamsburg, Virginia. Authentic Georgian architecture prevailed in the English colonies from 1700 to 1780 but is not repre... Read more
16

Once a residential block, this part of Tioga Street has been converted to public and commercial uses. This 1886 Queen Anne brick-and-wood row house once served as six homes. Across the street, on the site of the current Tompkins County Cour... Read more
17

Construction of the post office building was authorized by an act of Congress in 1902 and undertaken in 1909-10. The Beaux Arts design reflects the return to classical and Renaissance architectural forms in federal buildings. U.S. Treasury ... Read more
19

Built in 1835, this Federal-style brick double building is the only one of its kind in Ithaca. Its stepped gables are similar to those at 130 E. Court and 307 N. Tioga streets. The three-bay facades and flat wall plane are typically Federal... Read more
20

The Boardman House, built in 1866-67, links the economic, educational, and cultural development of Ithaca. George McChain, publisher and twice mayor, built the house on land purchased from Ezra Cornell. When a fire destroyed his business i... Read more
21

Constructed in 1860, this church replaced the original brick church built on the same site in 1824. The adjoining parish house was added in 1888. In 1892 the church was enlarged, and in 1913 a new chancel was built. Like the Old Courthouse,... Read more
22

The DeWitt Building (1912) is another work by architect William H. Miller. It served originally as a senior high school and then a junior high school. The building style is referred to as Tudor Revival or Collegiate Gothic, emulating the me... Read more 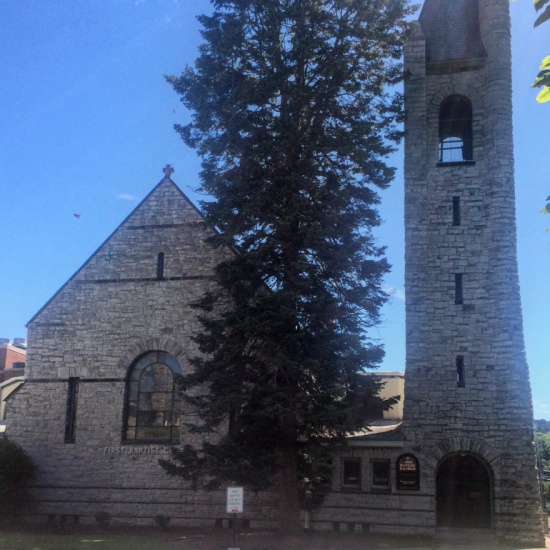 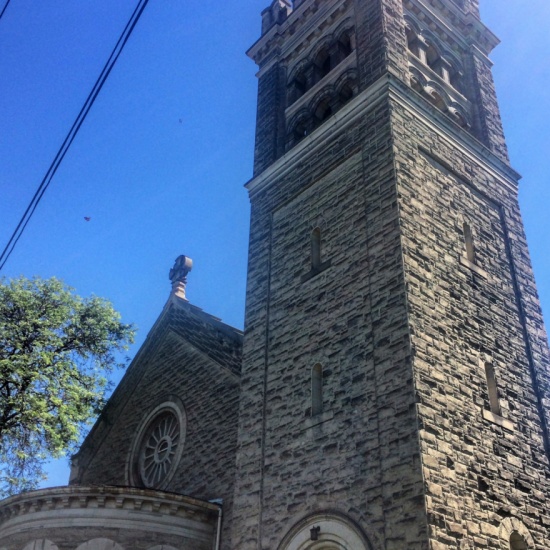 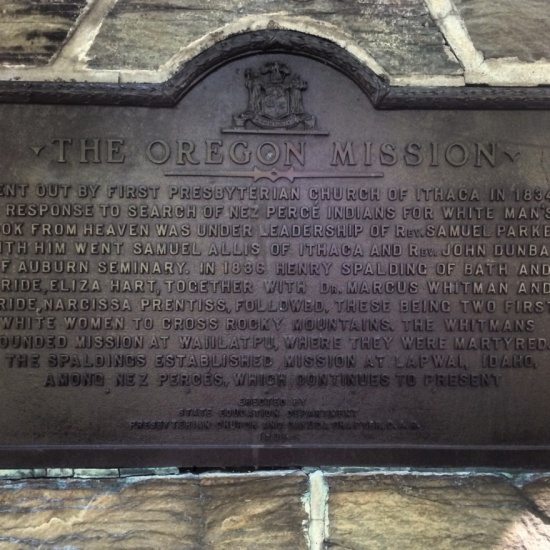 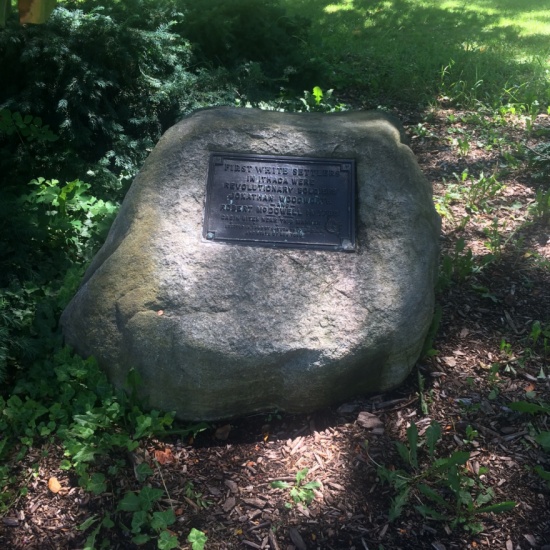 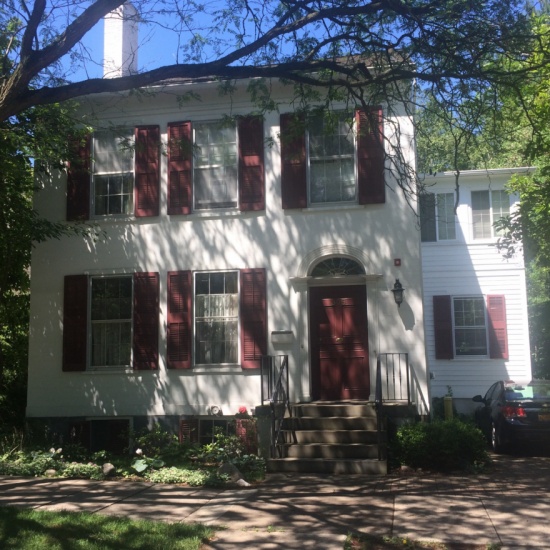 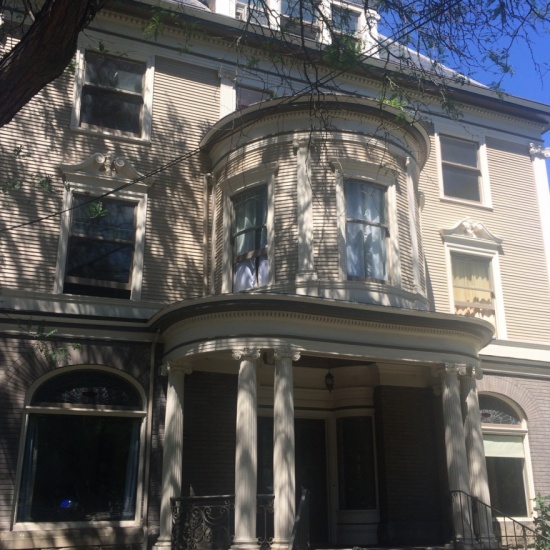 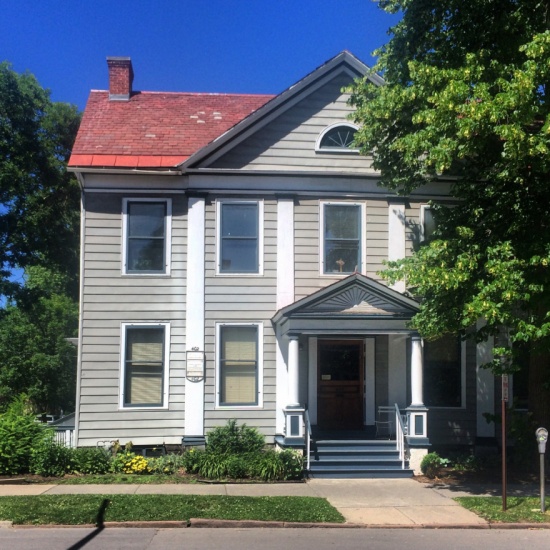 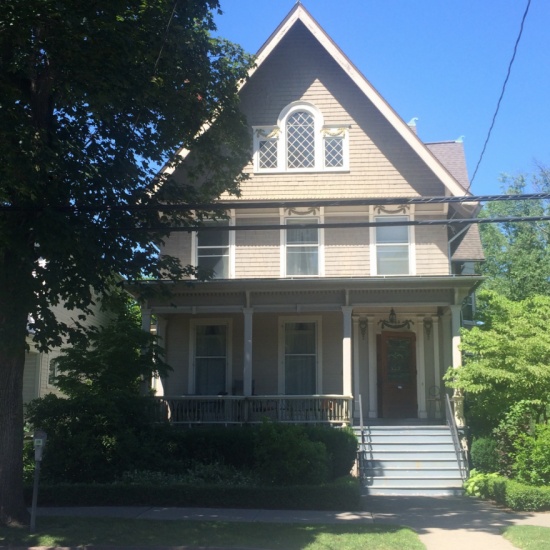 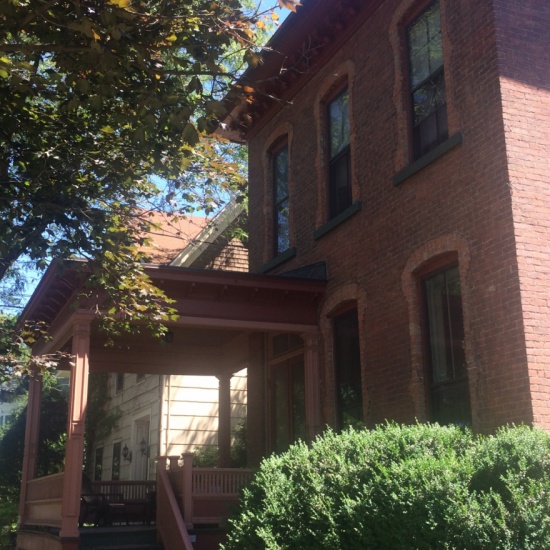 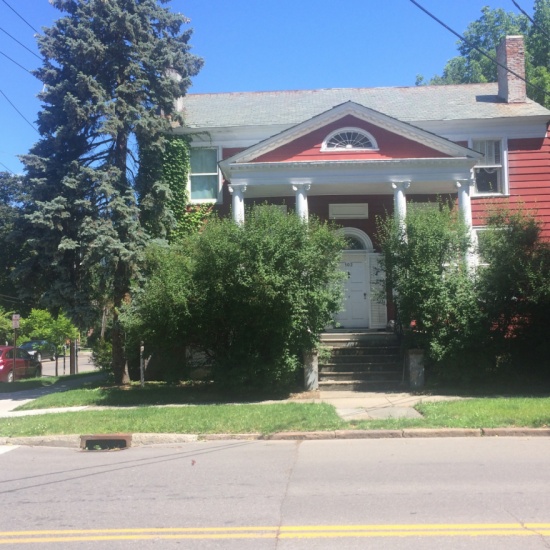 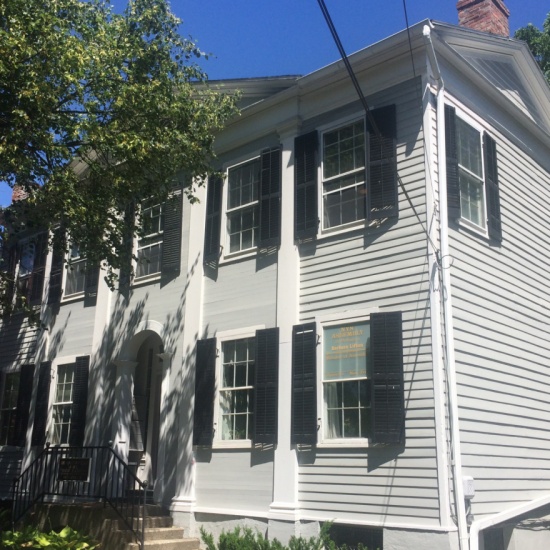 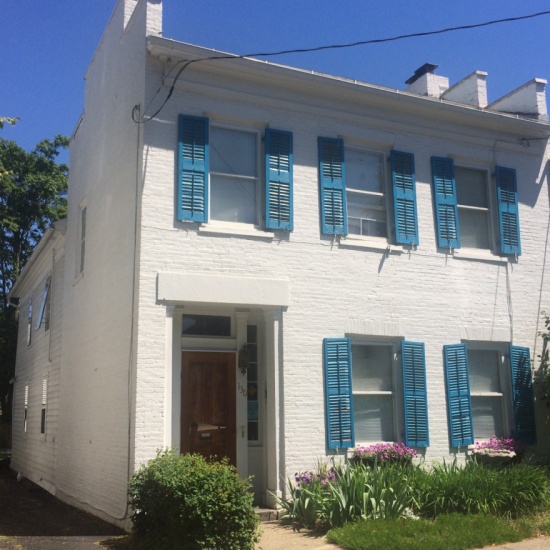 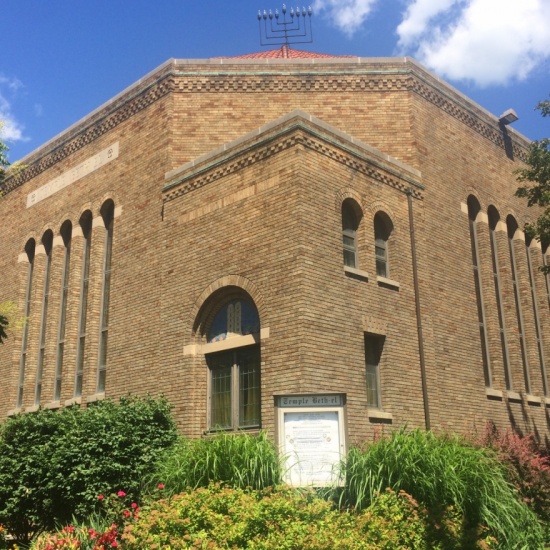 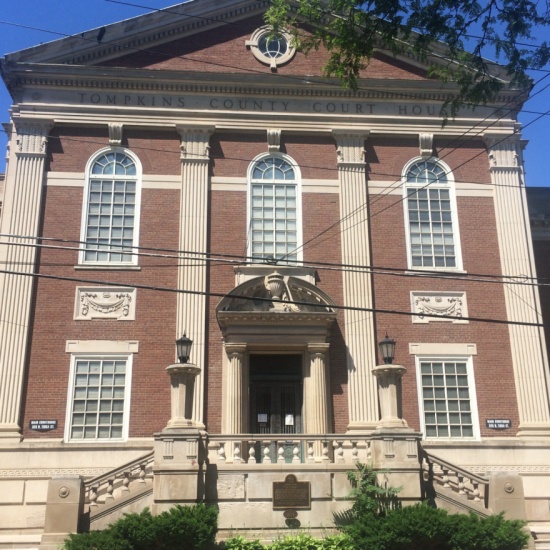 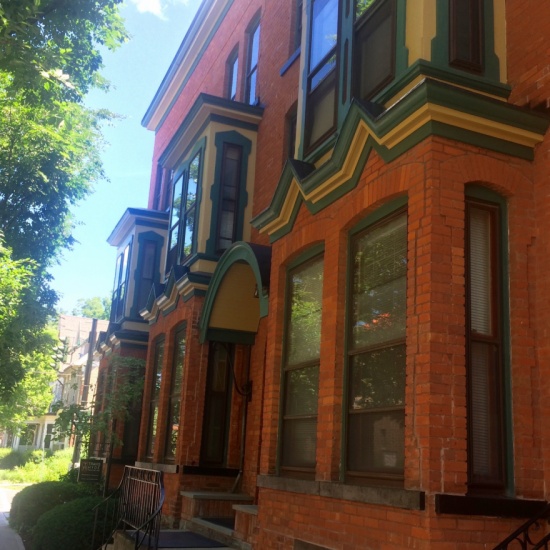 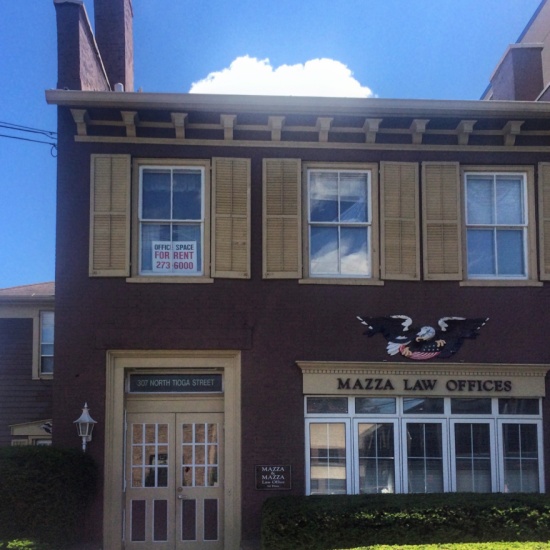 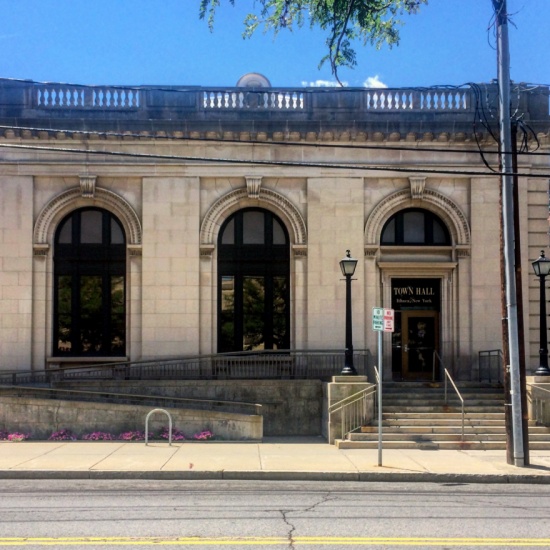 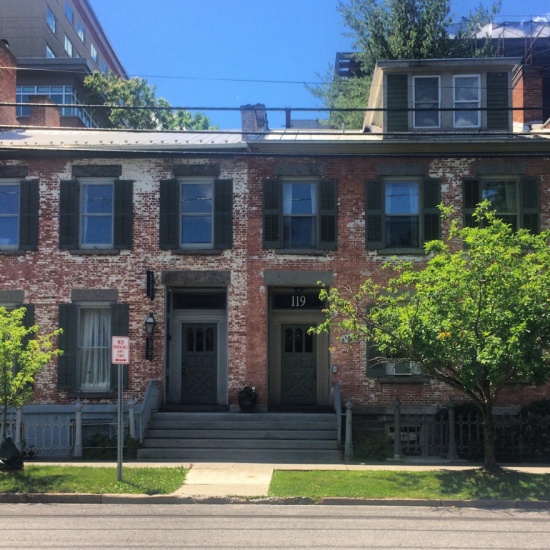 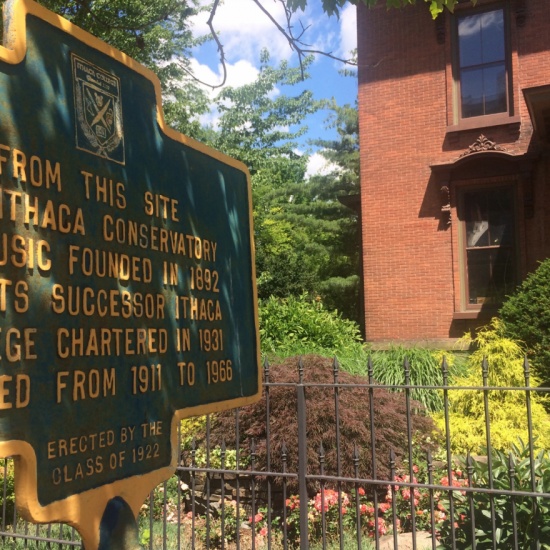 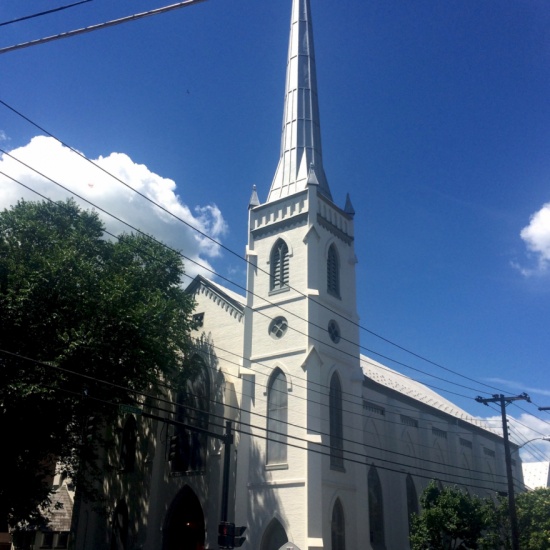 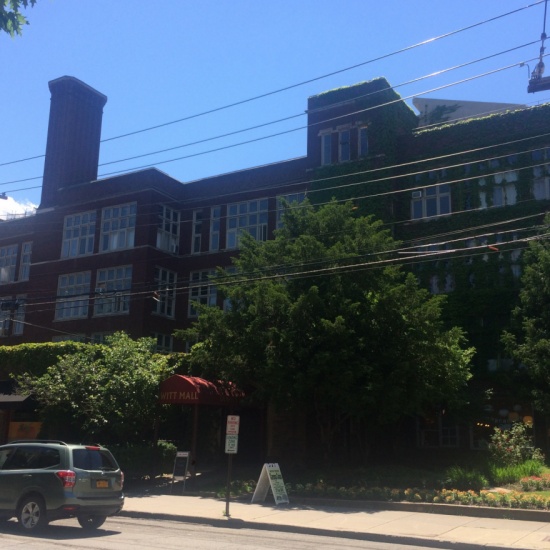