Historic McBean Street still has many surviving buildings from the last two centuries. This short tour highlights the bustling village life over that time.

Richmond is the oldest settlement in Carleton County. Laid out in 1818, it was to be a supply depot for one of the new townships being set up as a defence against American invasion. It was populated by soldiers of the 100th regiment of Foot, raised in Ireland for service in Canada, and renamed the 99th in 1816. It was named after the Duke of Richmond who paid a visit to the settlement in August 1919 and died nearby shortly afterwards from rabies, reportedly caused by the bite of a pet fox. The fox has become a humorous symbol of Richmond.

The new settlement straddled the Jock River which was then considered a useful transport route. However the building of the Rideau Canal made Bytown, (later named Ottawa), a more important centre for immigrants and new settlers. The military withdrew its support of Richmond in 1822 but the village continued to be the headquarters for the settlement of Goulbourn Township, and in 1850, it became the first municipally incorporated village in Carleton County.

3444 McBean Street This house, representative of a late 19th century village home and commercial building, was built was probably built around the 1870’s or 1880’s when the centre of the village moved north to the intersection of Perth... Read more
2

3452 McBean Formerly a Methodist church, this brick building was built in 1901 and was the third Methodist church in Richmond. Methodism came to Richmond soon after the founding of the village. Saddlebag preachers such as Rev. Ezra Healey p... Read more
3

3468 McBean Street This beautiful house was built about 1893 by prominent Richmond businessman Henry McElroy. He used three layers of bricks from his own brickyard. The house is based on the Queen Anne style of architecture with a two-store... Read more
4

3494 McBean The Richmond Lodge came into being on April 21, 1821 although Masonry had been practiced in the village right from the time it was founded in 1818. The name “Goodwood Lodge” was conferred in 1863. The early masons met origin... Read more
5

3506 McBean Street Joe Dallaire was born in Eganville, Ontario, attended barbering school in Renfrew and moved to Richmond in 1914. His business started in the rear kitchen of James McCarthy’s home (harness maker), then moved to a rented ... Read more
6

3550 McBean Street This stately pre-Confederation building was built by stone mason James Scott. It is in classical Revival style with gable roof, decorated corners, and an octagonal cupola centred on the roof. George Brown, a former reeve,... Read more
8

3556 McBean Patrick McElroy opened a general store here sometime during the 1840’s. He may not have actually owned the property at that time but in 1866 there is a record of him finishing  the inside of a second storey so the Masonic lod... Read more
9

3559 McBean This handsome building is typical of small commercial buildings from 1820 to 1850. Built for William Lyon in 1843, it is made of quarried stone with decorated corners and the main façade openings topped by fan-shaped arches. Al... Read more
10

3551 McBean Edward Malloch, MPP, land speculator, mortgage broker and county sheriff, purchased this lot in 1834.  But a house was not built on it until the 1860’s or 70’s, when an attractive wood frame, clapboard farmhouse was built, ... Read more
11

3537 McBean Street St. Andrew’s was the first Presbyterian congregation in Carleton County. Its ministers were mostly itinerant preachers until the first wooden church was constructed on this site in 1847. It was replaced by the present b... Read more
12

3499 McBean Street On March 27, 1924 the two-storey frame continuation school on Cockburn Street burned down. Eight months later, a new school was built, but on McBean Street, which was closer to the village centre by then. Meanwhile classe... Read more
13

3459 McBean Street Built around 1870, this clapboard building housed the McElroy family as well as Mr. McElroy’s office. William, the son of Patrick McElroy, operated his family store until the 1890’s. He was one of the most learned men... Read more
14

3451 McBean Street This handsome house owned by William H. Butler, was both residence and store. The store was in the front of the house under the street-facing gable, and Butler ran a tannery in the rear. He also made shoes and boots. The ... Read more
15

6092 Perth Street Built in 1855 by Edward Rielly, this 3 story, 22 bedroom hotel, was the largest building in the village. It was at the crossroads where travellers either turned north to Stittsville and the lumber camps, or continued along... Read more
16

6107 Perth Street The Dining Hall on the Richmond Fairgrounds was originally a two-storey building built in the 1850’s as the municipality’s Town Hall. It was used for meetings, banquets, dances and even a Model School. Its lower flo... Read more 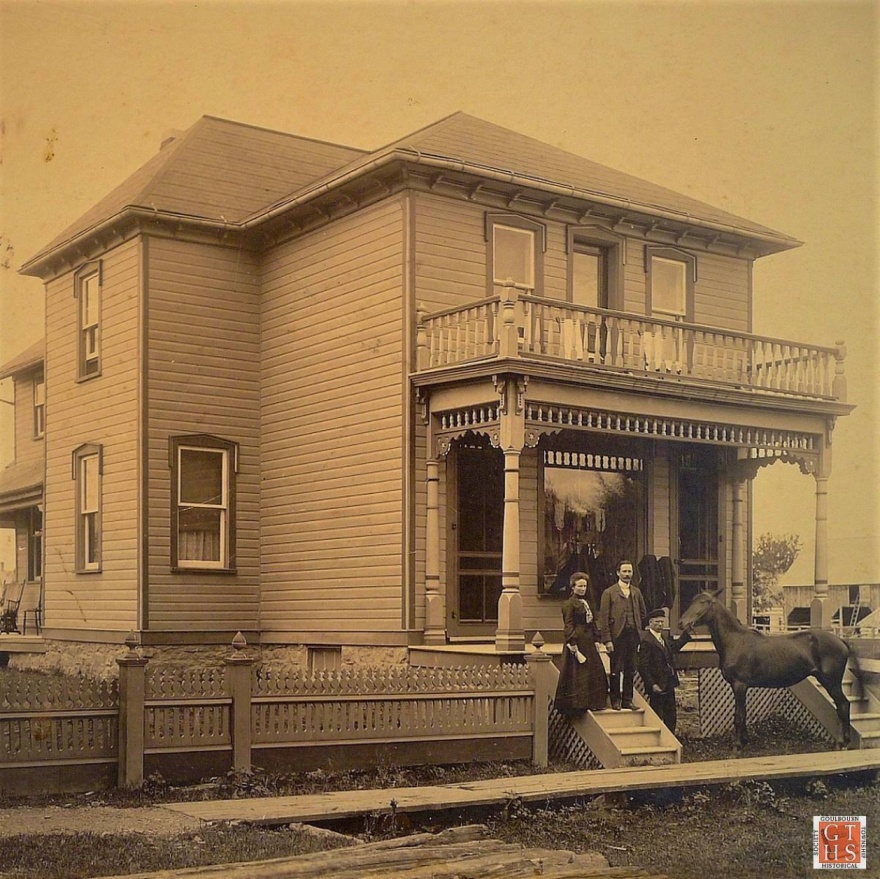 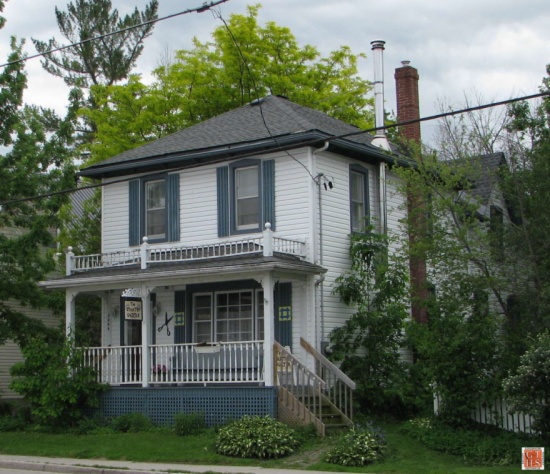 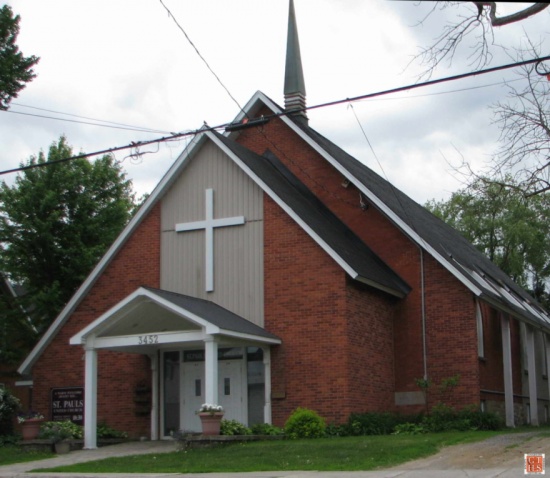 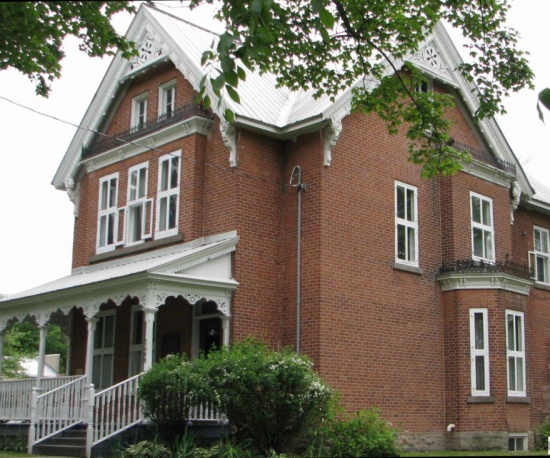 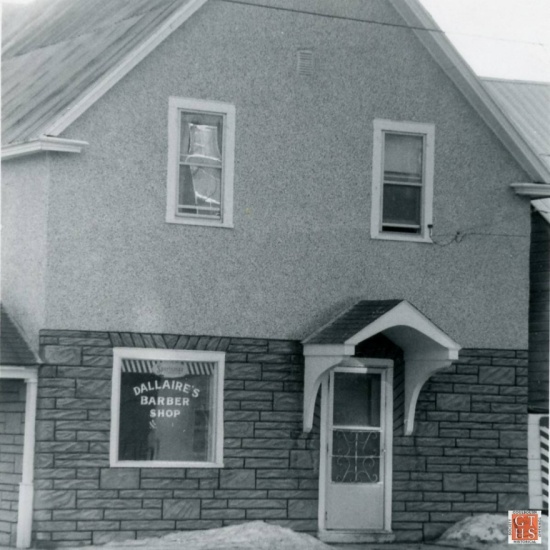 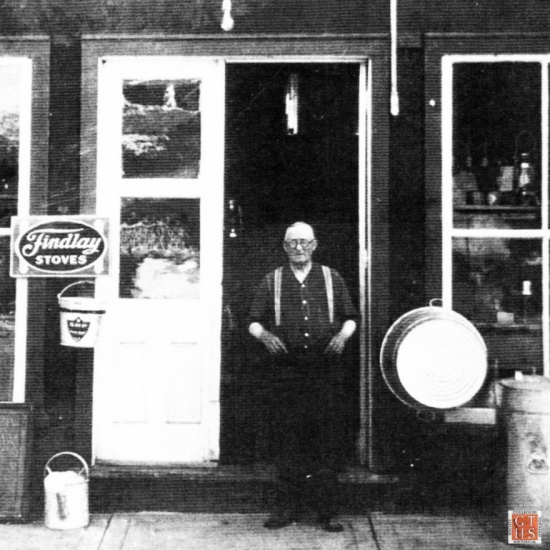 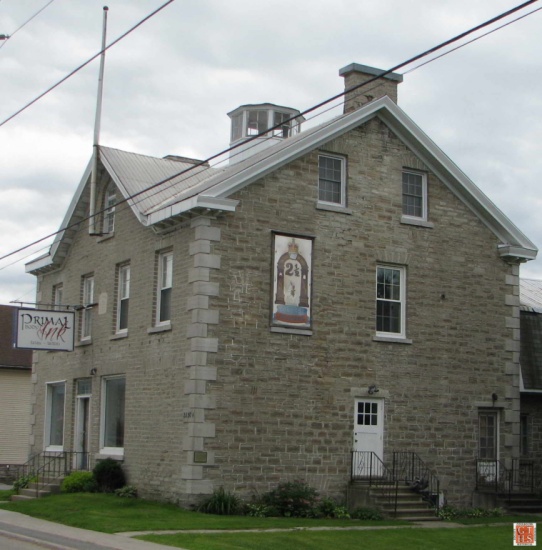 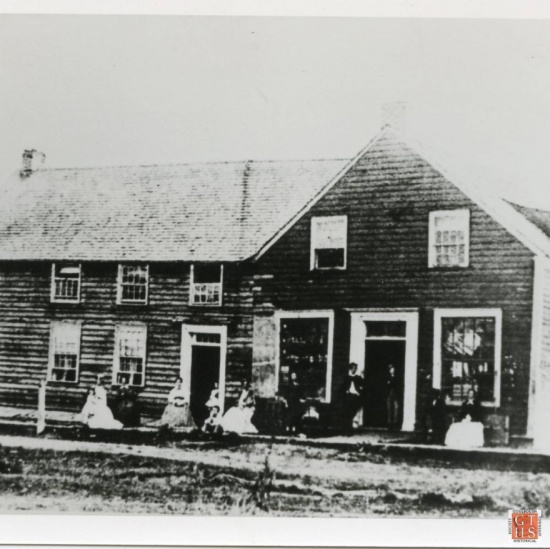 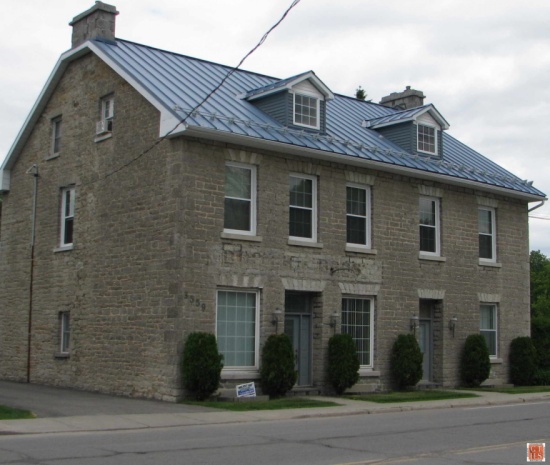 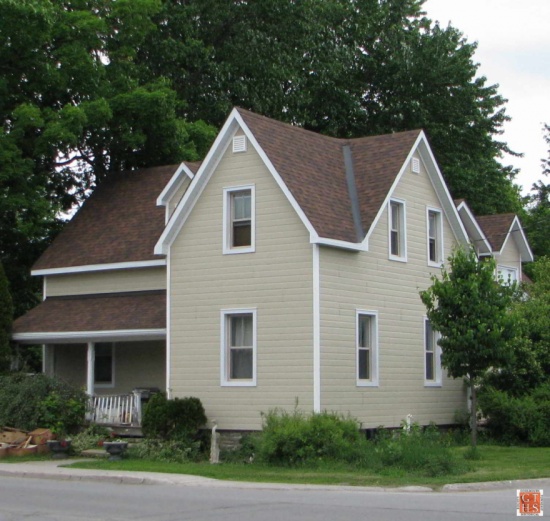 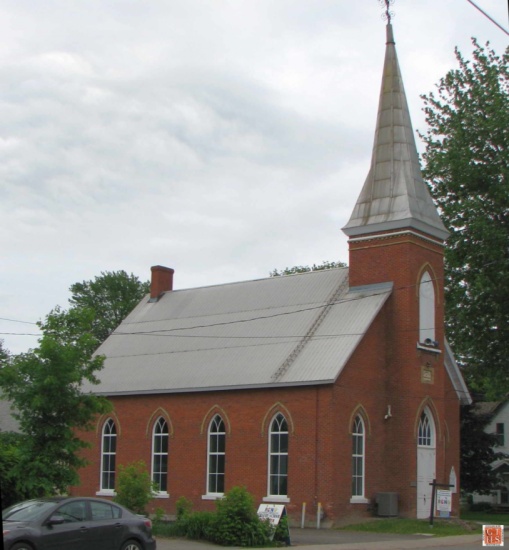 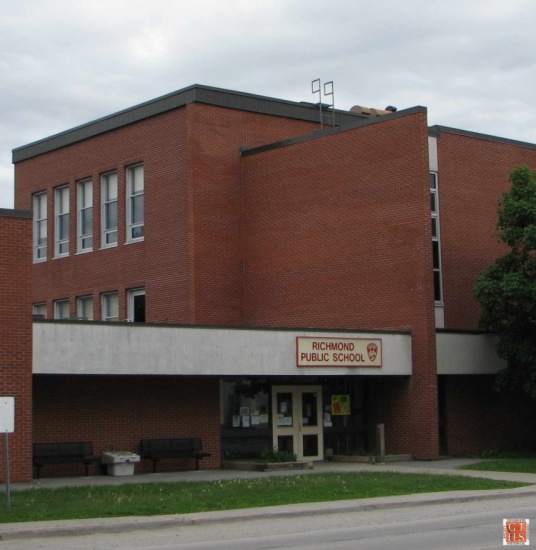 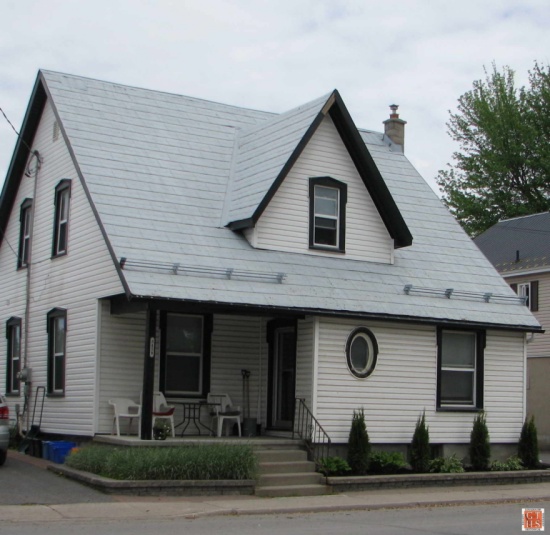 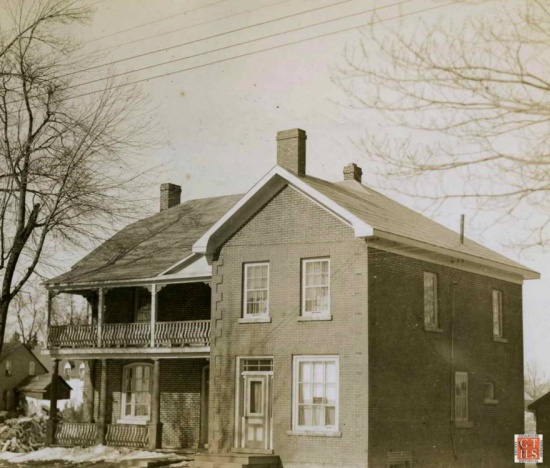 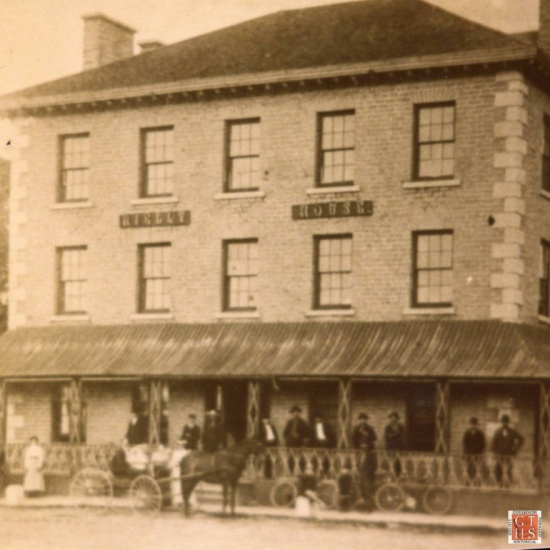 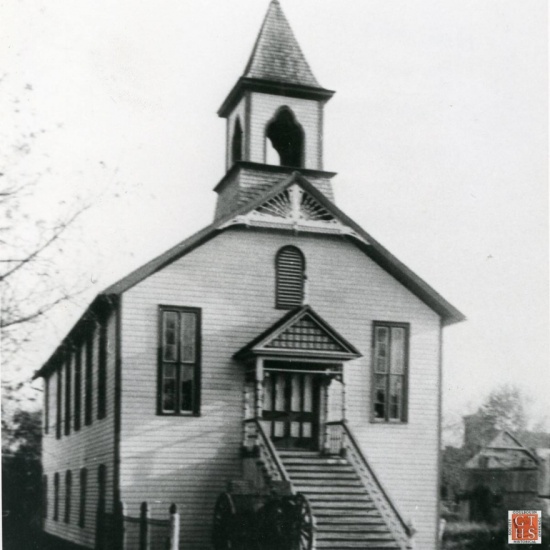