Frederick, Maryland is an English-German settlement that was established in 1745 that includes buildings with many interesting historical features.

Created By: University of Richmond

Frederick, Maryland, an English-German settlement established in 1745, existed through 273 years of American upbringing. Numerous famous political figures including George Washington, Abraham Lincoln, and Benjamin Franklin visited the thriving city as it survived almost all of America’s rich history. Frederick, Maryland has its own rich history and Church Street’s existence is paramount to understanding its impressive past. The Dulany family, the founders of Frederick, donated land on All Saints Street to the Evangelical Reformed Church to build the town’s first church in 1747. This was just two years after the city was founded. In the early 19th century, a second church was designed by Henry McCleery, a local renowned architect, and erected on North Court Street. During the mid-19th century, builders and architects began to construct churches along Church Street in order to create centralized gathering locations for church-goers to congregate every week. When church leaders moved their central parishes to Church Street, they used the original buildings for parish houses that served as locations for business and social gatherings. Many prominent elites who made significant contributions to the construction of the churches bought land and built houses and buildings along Church Street. The influence of the original owners of these structures links their historical significance to the present day.

This two-story brick residence was built ca. 1836. Originally it had just four rooms, two on the first floor and two on the second. it has been expanded considerably as one can see from the rear of the structure. On the facade, it has two w... Read more
2

This two-story residence is one of four identical mirrored connected townhouses. The main floor, on an elevated basement, is accessed via a five-stepped stoop. It has four arched windows: three small ones on the second floor and one large o... Read more
3

Built in 1848 for Isaac Gerhard, first minister of the Evangelical Reformed Church, this 2-1/2 story Federal-style residential building built in red brick and attached on the right side to a house that may have been a twin. The doorway fron... Read more
4

Built during the Federal period, some time between 1830-40, 227 E Church Street is a simple urban two story residence. While the brick common bond structure has been painted a variety of colors over the years, its architectural features hav... Read more
5

The residence at 221 E Church St is a two story traditional, common bond brick Federal-styled townhouse built in 1900. There imain entrance to the building which is located to the right of the first floor and is accessed via a small stoop w... Read more
6

The facade of 113 East Church Street uses common brick bond. This three story building features a white cornice and brackets of various sizes with teal detailing. There are three windows on the top two floor. On the main floor, there are tw... Read more
7

Known as the Tyson House, this residential building was built in 1854 and was designed by Permelia Sower. The building shares many of the Italianate characteristics found in the Trail Mansion across the street. Offices were added to the hou... Read more
8

The 150 feet high twin octagonal spires are of the most prominent features of the Evangelical Lutheran Church. Constructed in 1854, the congregation looked toward Norman Gothic architectural style to replace the single tower structure of th... Read more
9

This elegant three story high historic townhouse was built prior to 1873 meant to serve a single family. The design of the building is Federal type, with the exterior structure composed of white painted brick, three levels of triangular ped... Read more
10

This home constructed in 1835 sticks out along the north side of West Church Street due in large part to its painted brick facade. Originally this building was turned down for landmark status due to the addition of the large bay window on t... Read more
11

Built in 1882, like 132 across the street, this Federal style house is larger but is still made of the same red brick. The raised entry leads to a narrow front door with a lantern next to it. The approach to the light blue front door is mad... Read more
12

This is another textbook example of a Federal style house. It is actually part of a connected structure that was built in 1882. This structure spans from 132 West Church all the way to 142. Focusing on 140, one will notice similar character... Read more
13

This red brick home was built in 1882, making it younger than some of its neighboring structures by a few decades. The two-story house is a classic example of the Federal style found throughoutFrederick and specifically on Church Street. Wi... Read more
14

Built in 1862, this home is attached on both sides. Its red brick facade matches those all around it and also the narrow front entryway mimics many other homes along West Church. The front door, though narrow, is a double-door with red wood... Read more
15

Known as the Tyler-Spite House, this residential structure stands out along West Church Street with its stucco exterior painted in beige. The house was built by Dr. Sam Tyler in 1813 who then added to it a year later making it the size it i... Read more
17

The All Saints Episcopal Church was founded in 1742 as a parish of the Church of England, but has since then served as the Episcopal Church after the Revolutionary War. In 1855, Richard Upjohn designed the current structure. During the Batt... Read more
18

The All Saints Episcopal Education Building began as the church of the parish erected in 1813 by architects, Henry and McCleery. In 1855, this structure was re-purposed as the education building for the church. The Federal design of this bu... Read more
19

This Ionic Greek Revival institutional structure was formerly home to the Frederick Female Seminary, then the Women's College, and now serves as a county office building. Hiram Winchester, founder of the school, designed and oversaw the con... Read more
20

Built in 1820 originally as a private residence, this building was eventually converted into the Loats Female Orphan Asylum in 1886. In 1959, the Historical Society of Frederick County moved to the building and it has served as the foundati... Read more
21

204 E Church street is has a red brick front with five windows on the front red brick face with two pedimented dormer windows protruding from the roof between the chimneys on either end of the building. The headers and sills are painted lig... Read more
22

208 E Church St is a modest, red brick, three story house situated by a narrow alley on its right and a mirror-image joined house on its left. A short set of brick steps lined by two wrought iron railings lead to ten paneled door topped by ... Read more
23

212 E. Church Street is a common bond brick townhouse built in 1844 and mirrors its neighbor to the west. This traditional urban 2-1/2 story residence also features a six panel door with a transom window above. This traditional Federal town... Read more
25

214 & 216 E. Church street are each part of a duplex, constructed in brick between the years of 1870-80. All of the sash windows on this 2-½ story house capped by arched moulded cornices. Each side of the structure mirrors the other, f... Read more
26

220 E. Church street, constructed before 1850 is a simple urban residential common bond brick structure, built for a Federal merchant. This townhouse is 2-½ stories, gaining additional height from its pitched roof. As noted by one MD histo... Read more
27

230 E. Church Street is a two story brick townhouse built in 1880. On the first floor we find two doors and one four over four window all topped by the same style header. The eastern door is wooden and topped by decorative fretwork. In the ... Read more
28

Built in the early 1800s this Federal-style brick dwelling is sandwiched between two dissimilar structures like many on East Church Street. It features several classical details across the façade. One's eyes are drawn to the elegant entran... Read more
30

Built in 1840, this building is an example of neighborhood market with a second story dwelling common in Frederick in the 19th century. This building is a two-story house (242) entered via a central door and a shop (244) entered at the corn... Read more 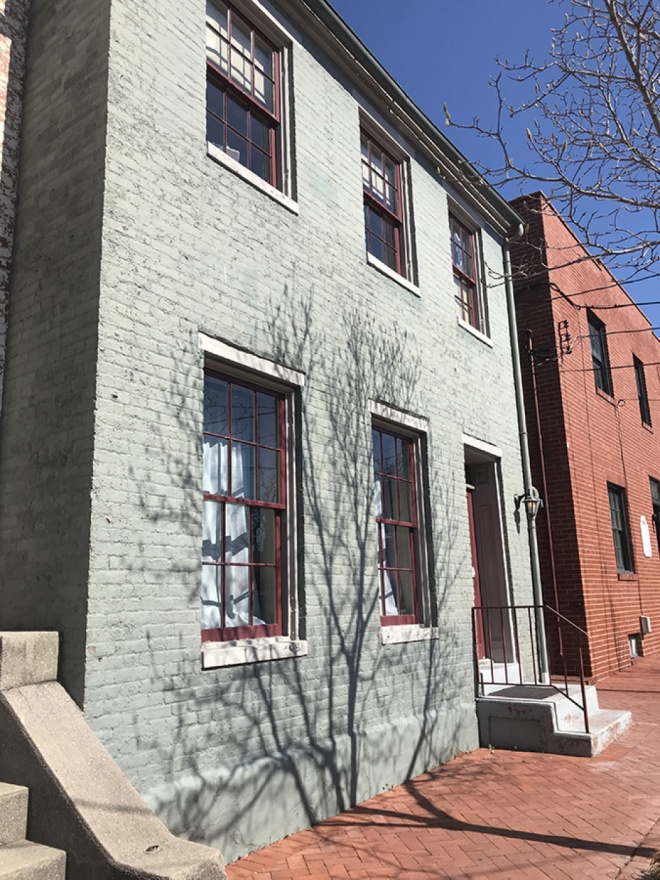 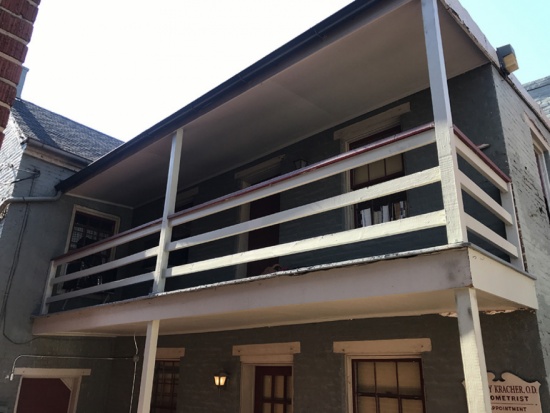 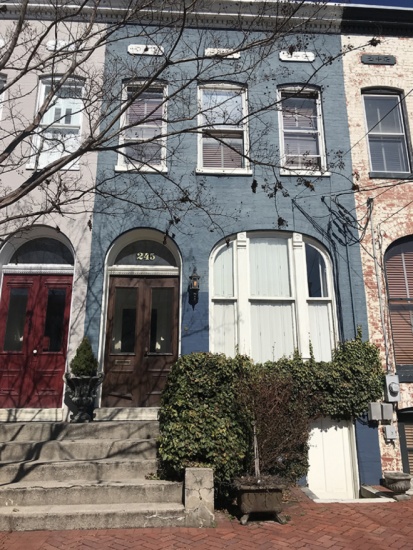 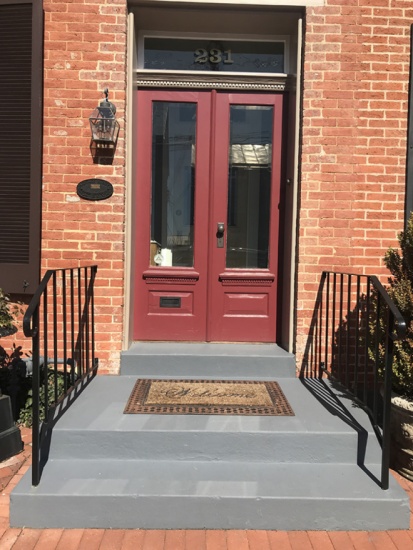 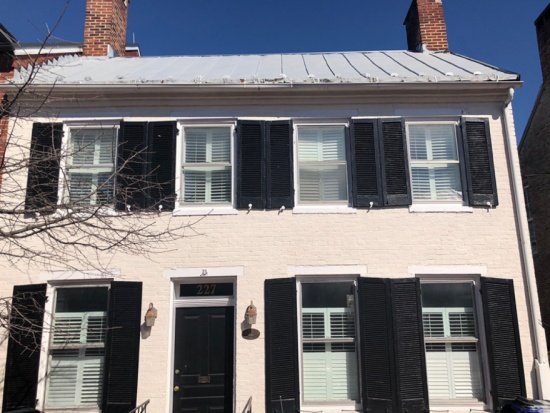 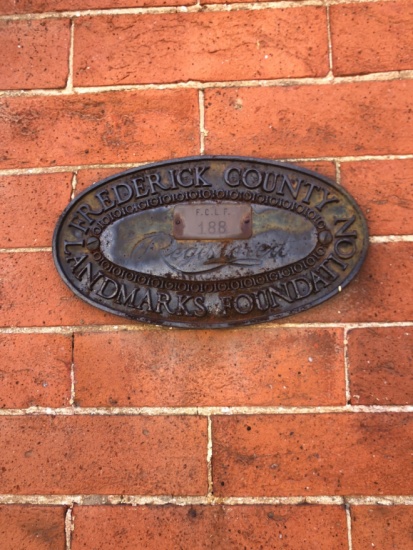 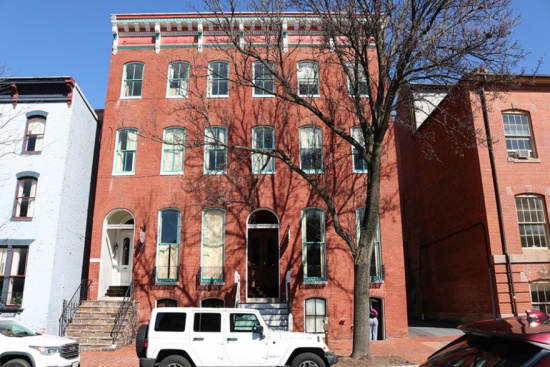 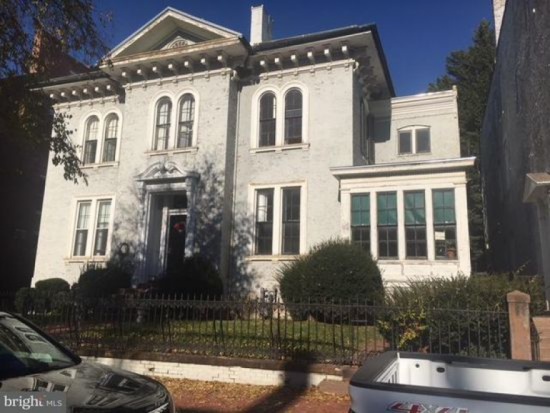 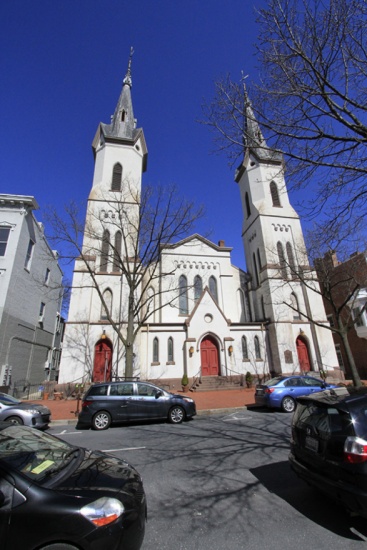 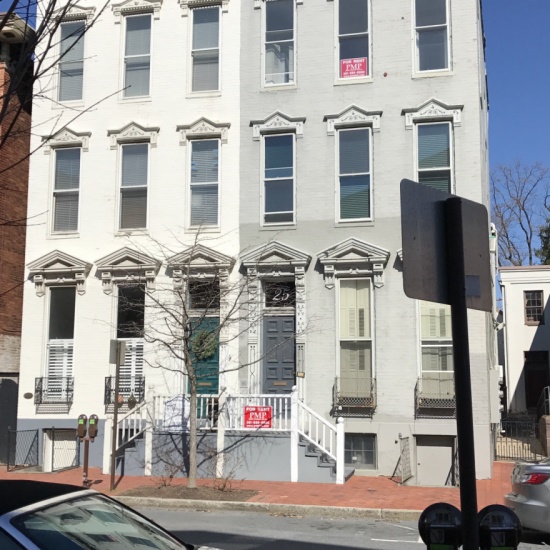 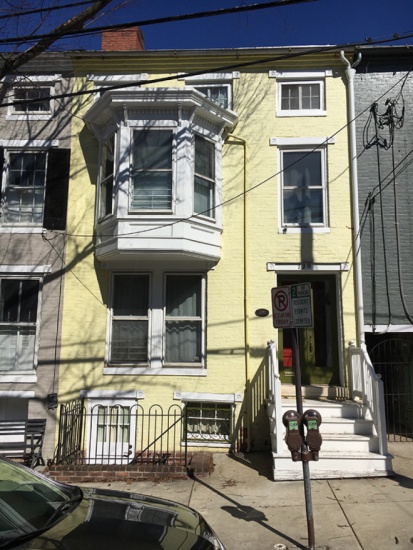 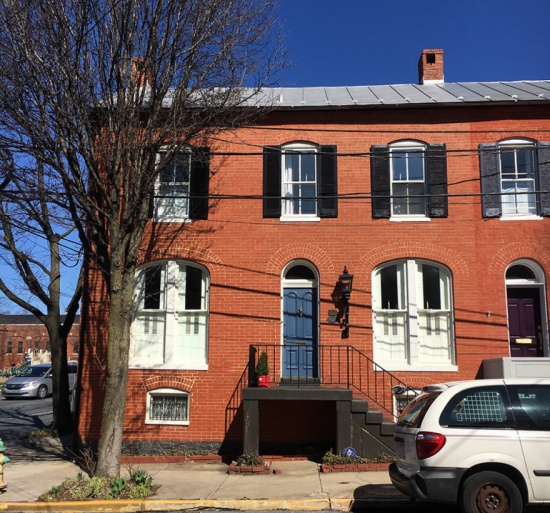 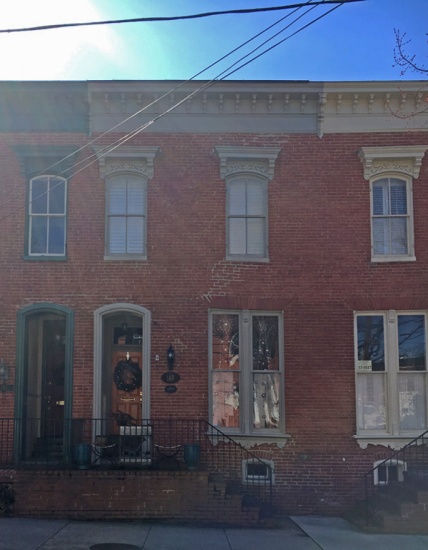 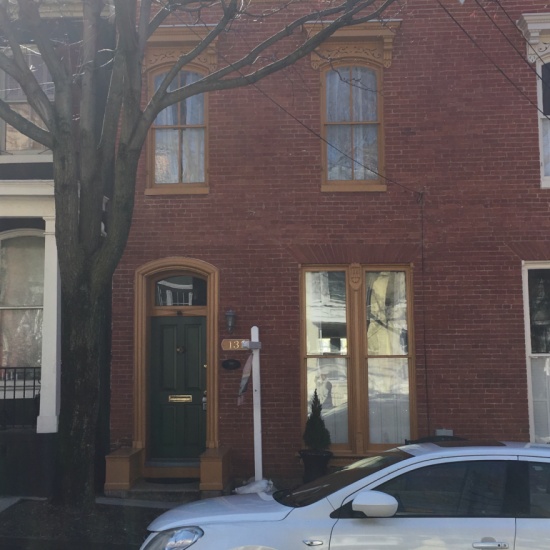 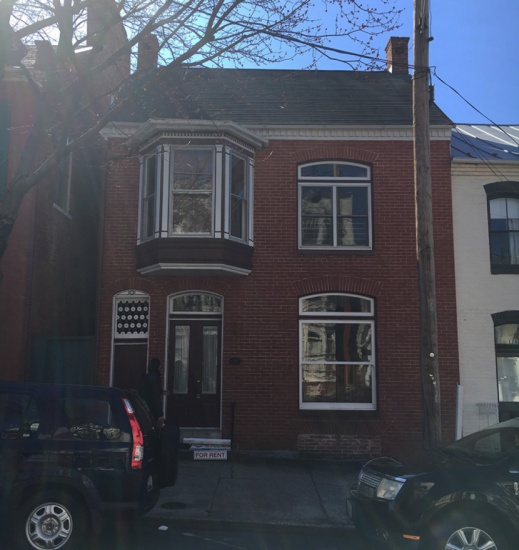 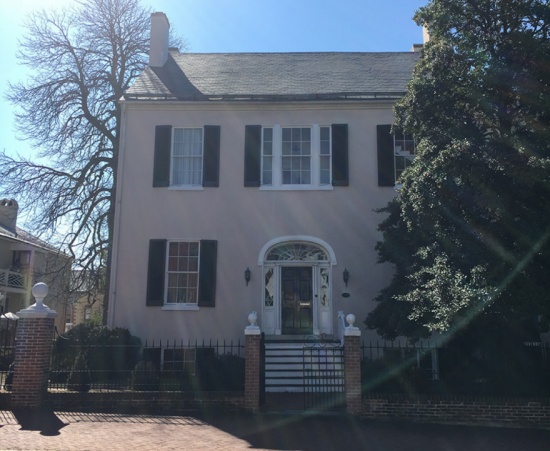 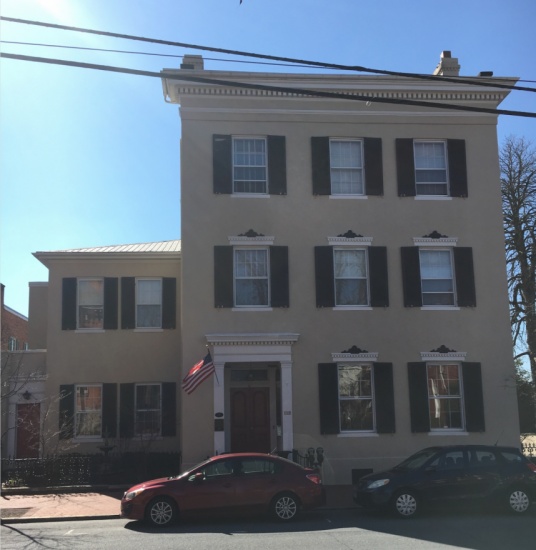 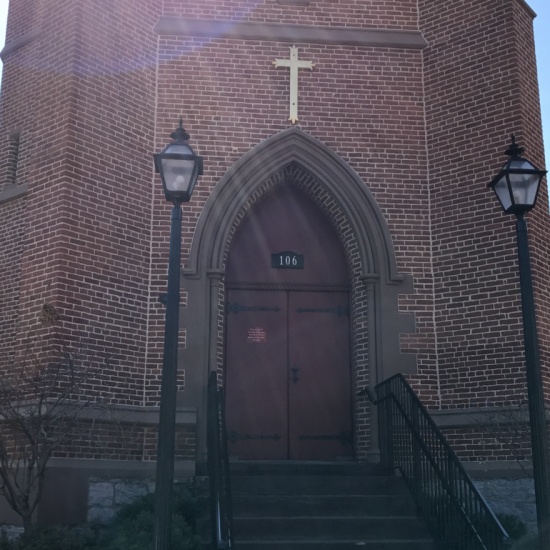 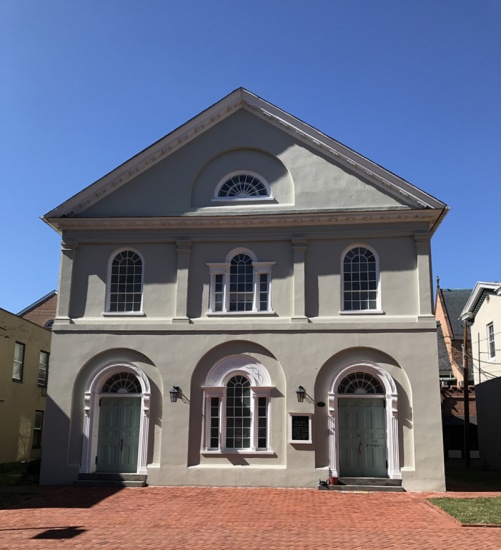 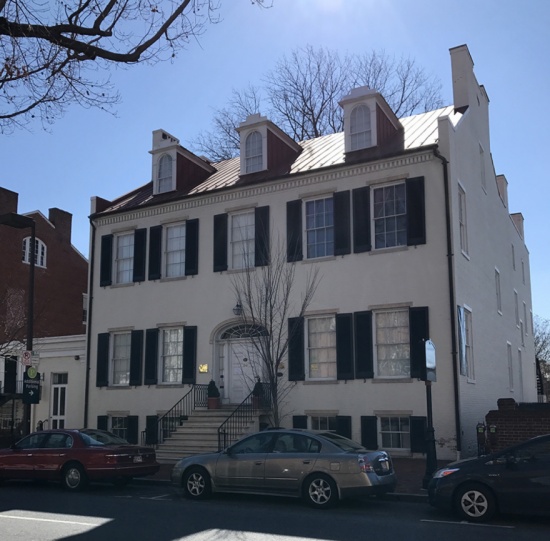 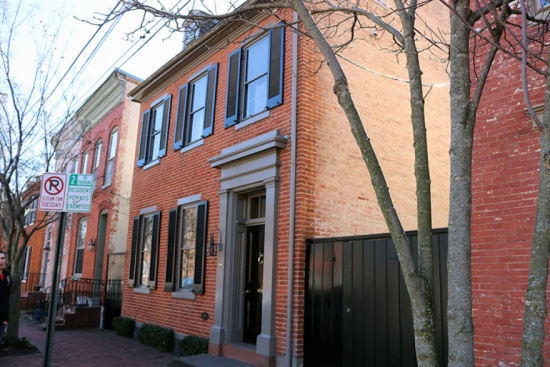 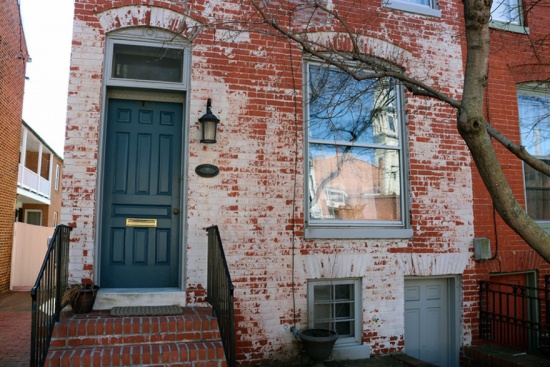 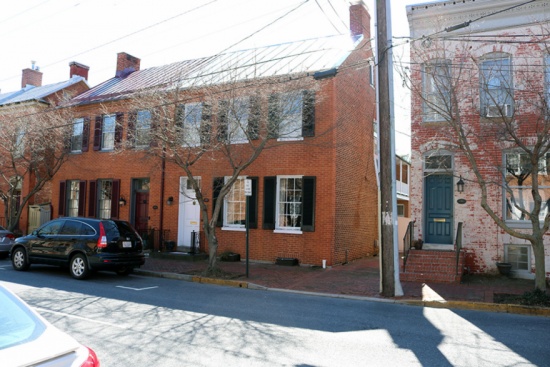 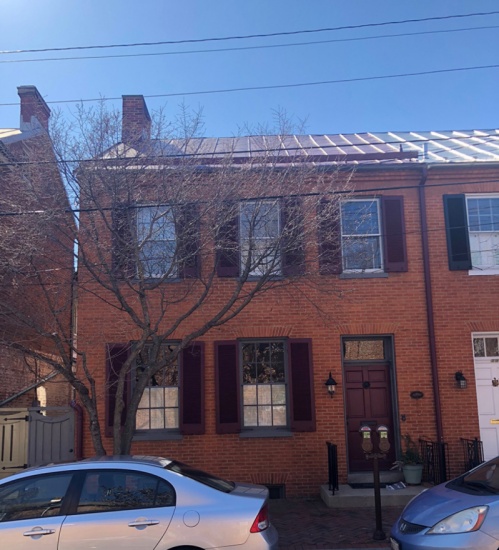 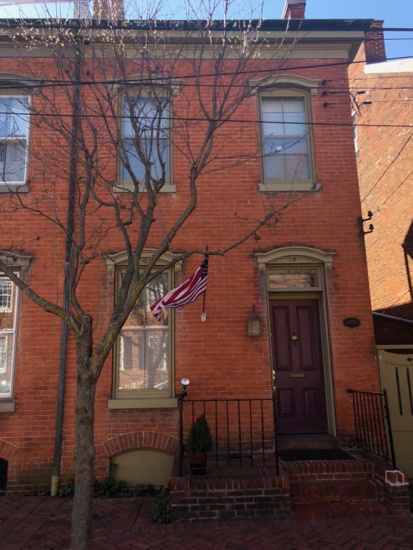 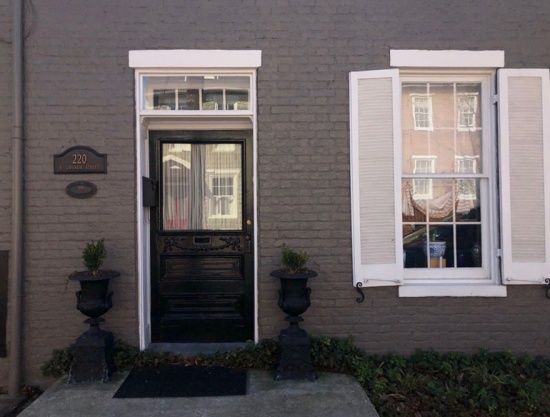 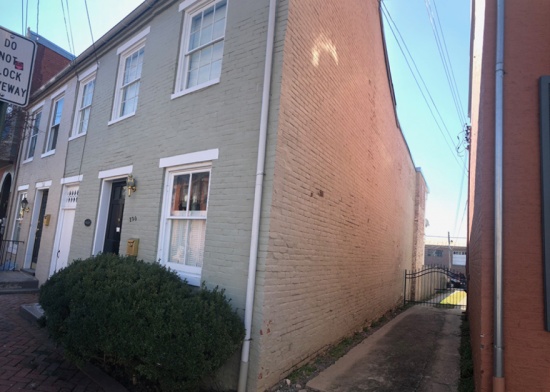 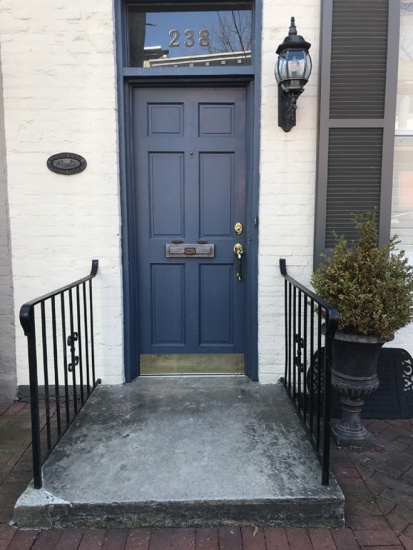 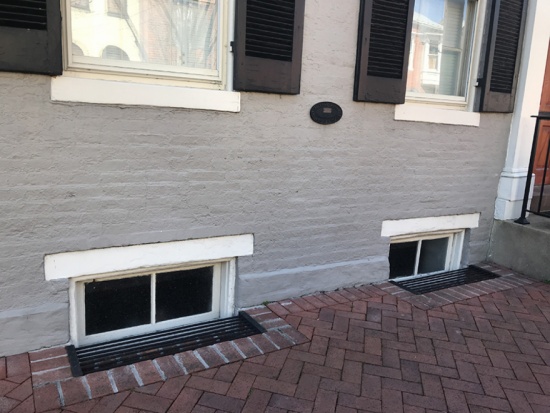 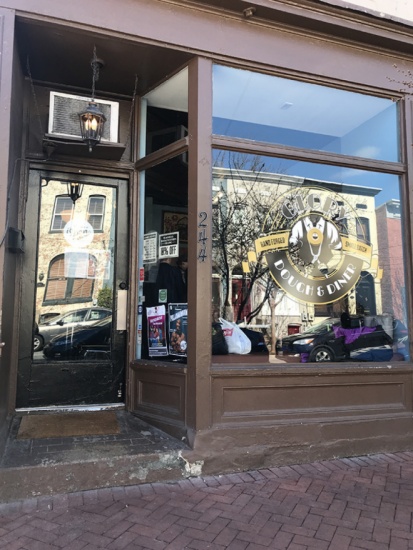